Robert Burns WAS a curler 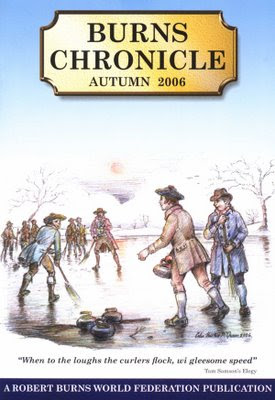 When David Smith wrote Curling: An Illustrated History more than twenty-five years ago he said, “It is to be regretted that Robert Burns, Scotland’s greatest poet, appears not to have been a curler. What a poem could have come from the pen that wrote The Holy Fair and The Jolly Beggars! As it is, we have to be content with two tantalising mentions of the game. In The Vision he uses curling to set the scene for the poem:

The sun had clos’d the winter day,
The Curlers quat their roaring play…

In Tam Samson’s Elegy the poet displays great familiarity with the game.”

David was to be proved wrong. He told the story of the new evidence which had come to light in the Burns Chronicle of Autumn 2006 (a publication of the Robert Burns World Federation), and in the April 2006 issue of the Scottish Curler:

"Athough no new Burns poem celebrating Scotland’s national game has been found in a dusty cupboard, what I have learnt is that in a copy of the Burns Chronicle of 1934 there is evidence that the Bard was a curler. For this I am grateful to Jim Clark, a retired policeman, who did us the honour at Ayr Curling Club this year of giving an inspiring toast to The Immortal Memory of Robert Burns. The irony of the situation is that that very copy of the Chronicle has sat with quite a number of others on my bookshelves for quite a number of years.

In the Chronicle there was published the first instalment of a then newly discovered series of letters between two friends of Burns, John Syme in the south west and Alexander Cunningham in Edinburgh. In a letter dated at Barcailzie, Kirkcudbrightshire, on 5 January 1789, Syme writes:

'I have been once or twice in company with Burns, and admire him much…
I missed a meeting with him last Friday at Dumfries, where he played a Bonespeel with the Curlers there, and enlivened their Beef and Kail and Tody till the small hours of Saturday morning. I was engaged in that Bonespeel, but an unlooked for occurrence called me out of Town, to my great mortification…'

It is therefore no surprise that in Tam Samson Burns was able to use such technical terms as ‘cock’, which meant ‘tee’, in one stanza, and to fill the whole of the next with curling terms:

He was the king o’ a’ the core.
To guard or draw or wick a bore,
Or up the rink like Jehu roar
In time o’ need.
But now he lags on death’s hog-score.
Tam Samson’s dead.

The metaphor for death of lying on the hog-score of life is particularly apt for a curler. The mock elegy on this Kilmarnock sporting seedsman and nursery man was probably written about 1786 but not early enough for inclusion in the Kilmarnock edition.

At the time of this bonspiel Burns was not yet a resident in the burgh of Dumfries. It will be remembered that it was in the summer of 1789 that he and his family moved into the small dwelling house that he had had to build on the farm of Ellisland, on the banks of the Nith about six and a half miles north west of the town. In that year the poet was still a young man of twenty-eight and had just received his first commission as an exciseman in charge of the ‘Dumfries first Itinerary’. It was in 1791 that Dumfries became Burns’s home after Ellisland failed as a farming venture. He was, however, already a poet of international importance by virtue of the publication in Kilmarnock in 1786 of his Poems Chiefly in the Scottish Dialect, and of the first Edinburgh edition of the poems in 1787.

John Syme, the writer of the letter, was about four years older than Burns and was a lawyer. In 1791 he moved into Dumfries as Collector of Stamps, and when the Burns family moved into Dumfries in 1791 their first house was situated above Syme’s office. His friendship with Burns extended to making the arrangements for his funeral, and, with the other friend, Alexander Cunningham, the Edinburgh lawyer, collecting money for his widow and family.

At this time the Dumfries curlers played in rinks of eight, each throwing one stone, as appears from the diaries of William Grierson, published by John Davies in 1981, as Apostle to Burns.
The entry for January 24, 1795, reads, 'About 11 o’clock went to the river and played at the curling all day, having got a new stone from T. Grier, mason, Penpont. There was 16 of us playing, 8 on each side. The side that I was on gained. We played for 2d. (two pence) a game. At 7 o’clock went to W. Bryden’s to drink the winnings.'"

Top: The publishers of the Burns Chronicle commissioned from Colin Hunter McQueen, a cover illustration celebrating the sport, for the Autumn 2006 issue. 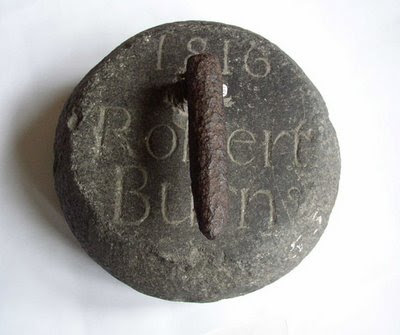 Could this have been Burns' own curling stone? Unlikely. It is certainly from the eighteen century, but the date is twenty years after his death. The stone is in David B Smith's collection.
Posted by Bob Cowan at 08:01

Loving this blog Bob! Congrats and thanks to you and your partner...