Newspapers are a very important historical source. They include snippets of information about the doings and achievements of ordinary people in their day to day lives, and also the less characteristic and out of the ordinary doings of the great. One of the problems about newspapers has been that until the internet age it has been necessary to travel to the library or archive which houses the run of newspaper which you wish to search. The other is the sheer volume of newsprint.

When large libraries – either alone or in conjunction with other libraries – put entire newspaper collections online the burden is amazingly reduced, for one can use the appointed search engine and be almost certain to find all the references for which one is looking. The reduction in fatigue and eyestrain is immense.

I was therefore exceedingly pleased to discover that recently the British Library has put online its collection of nineteenth century newspapers. Among these are to be found The Caledonian Mercury, an Edinburgh paper, and the Glasgow Herald, both of which might be expected to contain material on curling. And so it proved to be.

I have selected a few of the 'hits' to illustrate the width of material that can be found.

The first report tells of an interesting game taken on by members of the Duddingston Curling Society, and the editor goes on to sing the praises of the National Game of Scotland.

1809, 21 Jan., Caledonian Mercury.
“CURLING.- Upon Thursday the 19th instant, a BONSPEL was played, on Duddingstone Loch, between eight officers of the Dumfries-shire Regiment of Militia, and eight members of the Duddingstone Curling Society. The players were divided into two RINKS, and, after a well-disputed contest, victory was declared in favour of the Gentlemen of the Society.

The game of Curling was first invented in Scotland, and has long been peculiar to that country, in many parts of which it is practised with the greatest ardour, nor is the partiality for this National Game without a reasonable foundation, for it believed, that there are few versant with it, and at the same time with the other games and sports of this country, as well as with these of our sister kingdom, who will not admit, that in point of variety of the judgment, dexterity, and exertion required, the interest, or rather the enthusiasm excited, it surpasses them all.

The motto adopted by the Duddingstone Curling Society, is therefore just and appropriate.- The members wear a silver medal, upon which are represented Duddingstone Loch frozen, where a party of curlers are at play, the old parish Church, Arthur’s Seat, &c. in the background. The motto is Sic Scoti; alii non aeque felices.” The motto, loosely translated from the Latin is, “This is the way the Scots play: the rest of the world is not equally lucky.” The medal, or badge, of the Duddingston Curling Society, struck in 1802 and worn by members 'to distinguish them from any other gentleman'.

A few miles to the south of the capital and a few years later the curlers of Peebles were displaying the same enthusiasm for the game, not to mention the hardiness of the Scot.

1814, 7 February, Caledonian Mercury.
“CURLERS AT PEEBLES.- Five rinks, consisting nearly of eighty, met on the Tweed on the 2d curt. And after anxiously contesting the game, they dined on the ice, beneath the bridge, on the standard dish of beef and greens, served up from the Tontine. Many patriotic and curling toasts were given by the Provost in the chair, and others, in presence of upwards of 2000 spectators. The bagpipe and merry reels closed the icy scene, and the part proceeded to the Tontine, and spent the evening in the true curling style.”

Dundee Curling Club celebrated its bicentenary in the year 2000, although in the history published to mark the event it was conceded that there was no written minute until 1840. I wonder if the report below means that the curlers of Dundee were a bit premature.

It was a great thrill to come across the next passage for the medal still exists and still belongs to the curlers of the parish of Morton, of which the main village is Thornhill to the south of Sanquhar. I have had the privilege of borrowing it, and I have pictured winners proudly strutting around the parish with this small, unsophisticated proof of their skill on a ribbon around their necks.

1816, 26 February, Caledonian Mercury.
“On Tuesday the 30th of January, the curlers of Morton met on Drumcork loch, to play for a silver medal, presented to them by Mr John Fingland. The ice being uncommonly fine, a very great number of competitors were present. The rinks were marked out and tickets drawn, when one of the finest displays of skill in curling took place ever witnessed in that neighbourhood. It was not until after several were matched a second time, that the Committee, which was chosen, of experienced curlers, could award the prize, which they at last did to Mr W. Ferguson, Thornhill.” 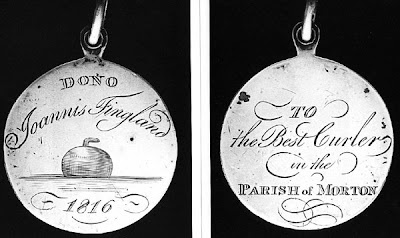 In the early part of the nineteenth century most curling took place in late December, January and February. The report below is indeed remarkable as it records a bonspiel taking place on the last day of October. The agricultural comment puts it properly into context.

1836, 5 Nov., Caledonian Mercury.
“It is a remarkable circumstance in the annals of curling that on Monday 31st October a bonspiel was played on the pond at Garvald House between the Dolphinston and Garvald players. The pond is five feet deep, and the ice was excellent. There is still nearly one half of the oats in that neighbourhood to cut, and almost the whole potatoes to dig.”

The next pair of excerpts speak for themselves of a different age.

1847, 20 Jan., The Scotsman.
“ROYAL LUNATIC ASYLUM, MORNINGSIDE.- CURLING.- The inmates of this asylum have recently formed an artificial pond in the grounds, and instituted a curling club amongst themselves; and, through the kindness of the Duddingston and Merchiston clubs, who have presented them with a number of curling stones, these unfortunates are now occasionally enjoying the pleasures of this exhilarating and ancient game.”

1848, 7 Feb., Caledonian Mercury.
“CURIOUS CURLING CHALLENGE.- On Monday last, the inmates of Morningside, through their medical superintendent, Dr Skae, sent a challenge to the Merchiston Curling Club, four against four, either on their pond at Morningside, or any other. Four respectable citizens kindly agreed to humour the lunatics, and play them on their own pond; for which purpose their ‘channel stanes’ were sent out in a cart on Tuesday, but unfortunately John Frost had by that time taken his leave, and the ice was covered with water. Dr Skae’s patients comfort themselves by hoping that “there is a good time coming.”

One of the ways in which curlers could extend the number of curling days was by using rinks made on the Cairnie principle. Another was to substitute something different – indoors and on a much smaller scale. This was the 'curling table' or 'summer ice table'.

The Glasgow Herald, which in the first four decades of the century did not appear to take much interest in the National Game began from 1840 onwards to include lots of 'curliana' – results of matches, advertisements and curious snippets.

For example, the issue of 28 October 1850 contained an advert by Andrew Galloway of 105 Hope Street, Glasgow, which proclaimed:
“The subscriber begs to announce that he has lately introduced an EXCELLENT SUBSTITUTE for ICE, whereby the NATIONAL GAME of CURLING may be enjoyed within doors. It consists of a handsome Mahogany Table, resembling a Billiard Table in form, having a surface of perfect smoothness for the Curling Stones to glide over, and capable of being adjusted by screws to the greatest nicety of level. The style in which the apparatus is finished is such as to render it an ornamental piece of Furniture, suitable for any Mansion.

The Subscriber has furnished his Curling Tables to many Noblemen and Gentlemen, all of whom speak in the highest terms of the excellency of the invention, and of the agreeable exercise and amusement thereby afforded.

A Curling Table in operation, and numerous references may be seen at the Subscriber’s Cabinet and Upholstery Warehouse.
ANDREW Galloway.
105 Hope Street,
Glasgow, 23d October, 1850.”

It was not long before the possibilities were being exploited. In the Herald of 13 December 1850 Messrs. Pattison & Co., announced the opening of their “Magnificent SALOON” in Brunswick Place/ Trongate where patrons could enjoy “GAMES of AMERICAN BOWLING, CURLING, BOWLING, CHESS, DRAUGHTS AND BAGATELLE,” though NO BETTING ALLOWED.

Of the Curling Table they said: “[It] is furnished by Mr. Galloway, of Hope Street, and is one of the finest he has ever produced – being four feet longer than the one built for Eglinton Castle.”

Watercolour sketch by Jemima Wedderburn of a house party of the Earl of Selkirk playing at summer ice.

David B Smith
Posted by David Smith at 19:25