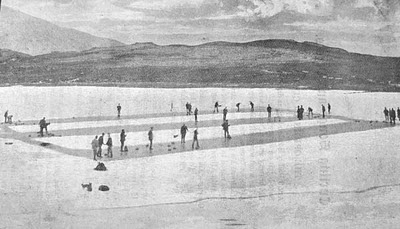 The Glasgow Herald of December 18, 1874, carried the following snippet of information about curling.

“OBAN,- The Oban and Inveraray clubs played a match yesterday on Loch Druimlie, near Port-Sonachan. The results were as follows:- Alex. Macarthur, Oban, 8, against J. Macarthur, Inveraray, 11; John Caddow, Oban, 9, against Sir Geo. Home, Inveraray, 10; Hugh Shedden, Oban, 7, against A. Guthrie, Inveraray, 24. The Obanites were defeated by 10 shots.”

Port Sonachan is a place on the south bank of Loch Awe, from which some sort of ferry plied across the narrow stretch of water to the northern bank.

In 1874 Inveraray CC had 22 regular members, and Oban 35. Inveraray fielded their president, Sir George Home, Bart., who won, and Oban theirs, Alex Macarthur, who lost.

Both clubs had quite a journey to make by horse and carriage to arrive at the icy field of battle. I think the report has named the loch in error. A loch that lies, if not equidistant between the two contending parties but at least equal in difficulty to reach, and which is near Port Sonachan, is Loch Tromlee which lies about a couple of miles from the hamlet of Kilchrenan and to the east of the road from Tyndrum to Kilchrenan, which is the route the Obanites would have to follow.

There is no trace in the maps of a Loch Druimlie on either side of the loch.

The Obanites’ route took them about twelve miles from Oban through Connel along Loch Etive to Taynuilt, from where they had about eight miles up the very wild and picturesque Glen Nant along a minor road which is still single-track and difficult at the present day.

The Inverarayans did not have quite so far to travel but their route did take them over the hills from Loch Fyne to Sonachan on Loch Awe, where they had to cross the loch, with their stones, in rowing boats, no doubt leaving their horses and carriages until the return journey after the game.

A curling match such as this in 1874 must have been quite an adventure as well as a sporting occasion. It seems to have satisfied the participants for neither club played in the Grand Match which followed on Carsebreck a week later.

The Glasgow Herald of February 20, 1888, tells us of another curling match in this vicinity, a points game for four prizes, played by Lochaweside CC on Moonloch. There is no such name on the modern maps of the area but to the north of the road from Kilchrenan to Ardanasaig appears Lochan na Gealaich, which being translated is the 'Lochan of the Moon'. 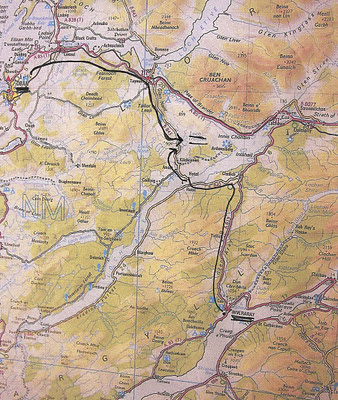 This map shows the routes of both teams in 1874. Click on the image to see in a larger size. The OS Map Reference for Loch Tromlee is NN 043 249.

Top photo: The Lochaweside curlers competed on Loch Tromlee in 1897, as this photo from the Annual of the Royal Club for 1897-8, p. cxlviii, shows. To see other historical curling places in Argyll look at the map to be found here.