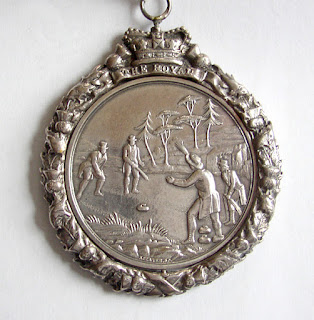 This article has been prompted by my finding in my repositories (great word!) a small parcel wrapped in crinkly, grease-proof paper. I have no recollection how it came to me. When unwrapped the bundle revealed within a paper envelope a slim cardboard box, and two pieces of printed paper. The box bore the legend: R and W SORLEY, Medallists, St Vincent St. and Renfield St. Corner.

The box’s content was a mint Royal Caledonian Curling Club District Medal, with a suspension ribbon, and chased suspension pin-bar.

The first paper was a proforma letter from A Davidson Smith, secretary of the RCCC, dated December 2, 1909, sending to an unnamed umpire the district medal awarded for competition between Glenmuir Water and Kilmaurs Clubs.

The second was a Report of the Match which he was requested to fill in and return to the secretary.

I had little difficulty in deducing that the match had never taken place, or the medal would not have found its way into my collection, but a perusal of the appropriate Annuals confirmed that that was so. So this medal joined the very large number of anonymous district medals that had either never been played for or had been played for but never engraved with the result.

The awarding of district medals was one way – the main way – in which the new Grand Club encouraged the spread of the game throughout Scotland. The institution of the Club occurred at an opportune time in history, for the beginning and expansion of the railways meant that the curler’s view of competition was no longer restricted to the immediately adjacent parishes. It was now possible for quite large groups of curlers to be carried quite considerable distances for their participation in the national game. By 1847 it was possible to think of seeing a whole nation at play in the large bonspiels known as Grand Matches.

The rules about medals first appeared in the Annual for 1839-40 and both District and Local medals were provided for. For district medals all the member clubs were to be arranged in pairs of clubs which were conveniently closely situated and those to whom medals awarded decided by lot. “The number to be given in any one year shall depend on the number of associated clubs, as well as on the state of the funds…” In the first year ten district medals were awarded. Local medals were for play among the members of one club at points.

The medals proved popular and clubs were arranged on a rotation so that every club had a chance to be drawn every second year.

In an article I wrote for the Scottish Curler in 2005 I said that it would be possible to make an estimate of the total number of Grand/RCCC medals produced since 1840 by adding up the number awarded each year; a list appears in each Annual, and a remarkably large sum for payment for medals appears in the accounts, but I had not done so. There must have been thousands. For example, for the season 1932-3 alone there were 125 district medals. Prompted by finding the Glenmuir v Kilmaurs medal I have now tried to calculate accurately the numbers of the district medal produced in total for the life of the first design, that is, from 1839 until 1870.

John Sclater was the man chosen to design the Club’s medal. His design – a group of curlers at play on the front, and the name of the club and its date of foundation, on the reverse – lasted until 1870, when, with a minimum of fuss, it was decided to have a new design. The minute of the AGM of July 1870 states: “Designs for a new medal, prepared by the medallist, were submitted to the meeting, and were remitted to the Committee on the Annual, with power to select a design, and to have the medal ready for distribution by the ensuing winter.” Next winter the preface to the Annual reported merely that, “The new medal has been highly approved.” What a pity that all the competing designs have not survived. The design approved in 1870, the combination of a curling scene and the Lion Rampant, has stood the test of time, for it is still in use. Nonetheless I have always preferred the earlier design.

The first medals were of silver although they almost never were hall-marked. In more recent times they have been made of humble bronze.

The idea inherent in the design of a largely blank reverse was to allow the winning club to cause to be engraved there the details of its victory, such as the date, the place, the opposing club, the number of shots by which victory was won. I have one or two which record – rather boastfully, it appears to me – the name of the president of the winning club. With such details the medal is an actual piece of history. Without them it is merely a quite common though quite pleasing example of the medallist’s art.

Some clubs displayed their store of medals with pride on every club occasion, sometimes by arranging them on an apron or waistcoat worn by the president; others by showing them off in specially made display boxes. Sadly, many clubs have not even bothered to have their medals engraved.

It was the job of the umpire , appointed at the time of the awarding of the medal, to send a report on the match to the Grand/RCCC for inclusion in the Annual. There one can read who played whom, how many, when, where, for how long and what was the state of the ice. The reports make very interesting reading. For example, in 1855 there was the report of the match between Catrine and Douglas Water. “The Ice was keen and a little biassed, the play was particularly good on both sides. The Douglas Water Club’s Stones were much larger than the Catrine Club’s Stones, and they told severely on the small stones, otherwise the game would have been much closer.” On January 12, 1871, two rinks of Brechin Castle were beaten by Forfar, 27-34, in a three hour match on Finavon pond, the ice of which was “Keen but very much twisted”, while on January 30 of the same year Yoker beat Milton of Campsie on Ardinning Loch on ice that was “All that a keen curler could desire.”

When the system settled down one could read in the Annual which clubs had been awarded medals against which club. The theory was that next year in the following Annual one could read the result. Our fickle climate meant that this by no means always happened. In some good winters we find in the table the results for medals awarded up to four of five years before; and, of course, some medals, like the one that inspired this article, were never played for at all. 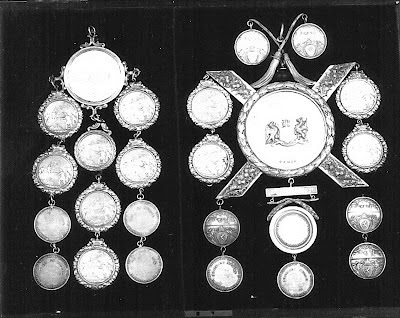 This picture shows the medals of Roslin (Rosslyn) CC as displayed in a specially made box. 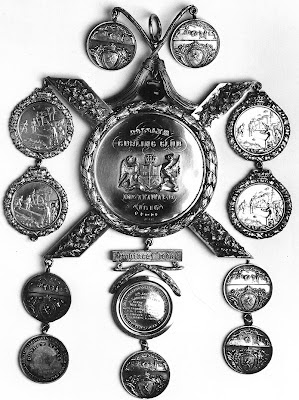 This part of the display of medals of the Roslin Curling Club shows what could be done to maximise the impact of winning a district medal. Nos. 1 and 2 referred to the large medals.

The illustrations are © David B Smith.
Posted by Bob Cowan at 09:52

I have a RCCCC district medal, with hallmark, which was won by my father post WW2 iin a rink sourced in Kirriemuir Angus. The match would have been played on the rink in either Perth or Dundee. There is no name inscribed on it