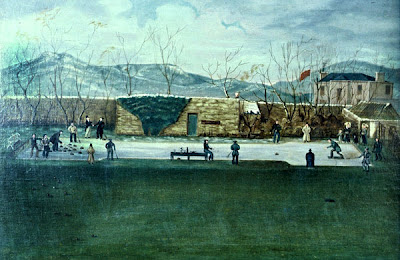 David B Smith continues the story of John Cairnie, the first President of the Royal Caledonian Curling Club. Part 1 is here. The oil painting above, in the Royal Club's collection, shows curling at Curling Hall c1833. The artist's surname is McLennen, of whom nothing is known. Image from Bob Cowan's archive.

In an addendum to his Essay Cairnie had written with approval of a proposal by the anonymous writer of a book on curling that had appeared in Dumfries in 1830 that there should be a national curling club for Scotland. Five years after he wrote this, it came to pass.

Many people think that it was Cairnie who inserted the advertisements in the North British Advertiser in May 1838, which resulted in the meeting at the Waterloo Hotel, Edinburgh, on July 25 at which the momentous decision was taken to found just such a club, the Grand Caledonian Curling Club. There is no doubt he was there, and indeed he was elected to the chair of the meeting. No doubt he had a pile of his Essays under his good arm. But I am inclined to believe Cairnie himself when he wrote in a letter of July 1840 to the vice-president of the Kilmarnock Curling Club, "You are mistaken if you think I had any hand in the getting up of the Grand C. Club ~ it was from some anonymous notice that I attended in Edinburgh. I believe the author was a Kinross man, and I think the formation will look better yet ~ The rules etc. Require much improvement."

False modesty was not one of Cairnie’s virtues. He craved recognition for the invention of his artificial rinks. I personally think it most unlikely that if he had had a direct part in the founding of the Grand Club he could have refrained from boasting about it. Everyone present at the inaugural meeting must have realised that they were embarking upon a momentous new chapter in the history of their favourite, national sport, for in this regard curling, if not first in the field, was years ahead of other Scottish sports in creating a nation-wide organisation. I cannot see Cairnie denying himself the glory if the idea was his. The Edinburgh Evening Courant in reporting the success of the meeting said that Cairnie, "eulogized this ancient and national game as one which, independently of its own intrinsic merits as a noble and manly recreation, was well calculated to form a bond of kind and elevated feeling, identified as it is with much that is good in our national sympathies and habits."

The editor of the Royal Caledonian Curling Club Annual for 1843-4 - the new club was given royal patronage not long after Cairnie’s death - reminisced about Cairnie at the inaugural meeting, "None who were present on that occasion can ever forget his honest, blunt, kind, and off-hand manner, stranger although he was to us all - a manner which he did not assume for a purpose, but which belonged to his character, and was displayed equally at home and abroad - on and off the ice..." 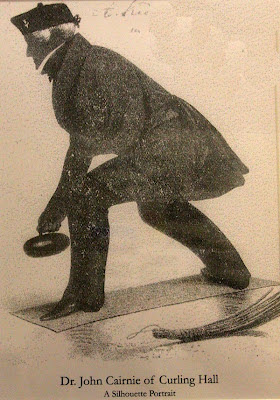 This image of Cairnie hangs in Largs Museum.

Cairnie died on October 27, 1842, in his seventy fourth year. His obituarist wrote that "he was a man who has gone to his last account with the love and esteem of that sweet marine retreat, where, after a life of activity and usefulness, he had pitched his tent. By every Curler his memory will be held in veneration, for, full of manly enthusiasm himself, he did more to elevate and excite the popular feeling in favour of the 'roaring play' than any man of his times; and 'Cairnie’s rinks' are as familiar as household words to every knight of the broom and channel-stane..."

I have long been curious about the financial circumstances of John Cairnie. In 1998 I satisfied myself to some extent for I consulted in the Register House the inventory of his estate.

His testament was drawn in 1839. It appears that he was comfortably off. The sum total of his moveable estate, given up by his only executor and fellow curler, James Lang of Ferralside, and sworn before the JP and fellow curler, Robert Morris, amounted to £8,611.4.6.

He owned house property and feu duties in Glasgow, a few sums lent on heritable securities, and had shares in Glasgow Gas, and Paisley Gas Company, Paisley Water Company (on whose dams I am sure there was curling), Largs Harbour Company, and Millport Harbour, Paisley Commercial Banking Company, and Renfrew Railway Company. He also had an interest valued at £750 in the ship, Simiramis.

He made provision for his wife, who predeceased him, and for his nephew, Neil Cairnie, junior, (who was at the time of the making of the testament Commander of the barque Trinidad, of Greenock), "until the succession to my real Estate shall open to him and he be put in possession thereof under the joint settlement executed by me and my said spouse" on April 20, 1839.

As well as a specific bequest to Neil Cairnie of "my Gold watch chain and [silver] seals, my cats eye and starsaphyr brooches, my curling stones and bowls" there was a bequest of the residue of his moveable estate to him on his attaining the age of thirty, with a destination over to a list of people, whom all failing "to the Grand Caledonian Curling Club of which Club I am now the President."

There are two codicils which only change his choice of executors, but one written in a train says, "Let not my unnatural brother attend my funeral - let my coffin be laid over that of my dearly departed”. The circumstances in which he came to write the codicil in a rail carriage are described in my article, John Cairnie and the Cowlairs Rail Crash, in the Scottish Curler of December 2005.

In summary, on the morning of July 5, 1842, Cairnie and three other passengers had been trapped in their carriage of the Glasgow-Edinburgh train, when it was hit by the 09.00 Edinburgh-Glasgow train at Cowlairs. Trapped in his carriage, Cainie had penned a codicil to his will.

One of the passengers, John McLeod, a Glasgow bookseller, was to die from his injuries. The pointsman on duty, James Cooper, pled guilty to negligently performing his duties, and was sentenced to twelve months imprisonment.

The mystery of an 'unnatural brother' remains unsolved.

There is nothing to suggest that the injuries sustained in the rail crash caused Cairnie's own death some months later on October 27, 1942.

The following lines appeared at his death.

Why droops the banner half-mast high,
And curlers heave the bitter sigh?
Why throughout Largs the tearful eye,
So blear’d and red?
Oh! Listen to the poor man’s cry!
John Cairnie’s dead!

While winter’s breath as waters freeze,
Lays waste the fields and bares the trees,
Or well-rigged yachts in joyous breeze
For prizes ply,
Cairnie, thy name by land or seas
Shall never die. 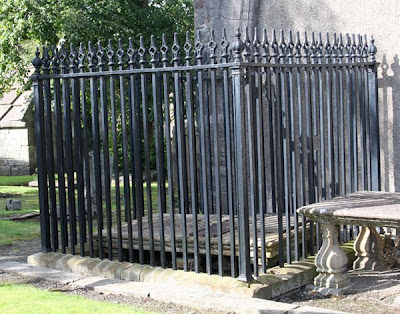 John Cairnie is buried in the old churchyard in the centre of Largs, the gravestone surrounded by an iron fence. The inscription on the gravestone is no longer easily read, but is recorded in the museum (which is run by the volunteers of the Largs Historical Society) as 'To the memory of John Cairnie Esquire of Curling Hall, surgeon HEIC service, who died the 27th October 1842 aged 73 years, and Agnes Galbraith his wife who died April 1842 aged 53 years." Photo by Bob Cowan.
Posted by Bob Cowan at 13:16