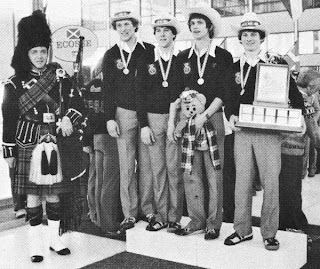 Following the success of the Andrew McQuistin team at the 1980 Uniroyal World Junior Curling Championship, see here, Scotland's representatives at the 1981 competition in Megeve, France, came again from Stranraer. Wilson's team had beaten the McQuistin side to get to the Scottish Junior Championship finals. And in Megeve, Scotland came out on top of the world, for the second year in a row. That's the winners on the podium: (L-R) John Parker (lead), Roger McIntyre (2nd), Jim Cannon (3rd) and Peter Wilson (skip).

Thanks to Norman Brown who preserved a VHS tape of a BBC Television broadcast of the official Uniroyal promotional film, we have a visual record of the event. The first part of the film was a summary of the first six years of the World Junior Championship, which has already been mentioned on the Curling History blog. That link is here.

In the semifinals, Scotland beat the USA, skipped by Ted Purvis, but most of the film is about the matchup between Canada (Denis Marchand, skip) and Sweden (Thomas Norgren, skip). Watch this here.

Bob Picken narrates in each clip.

All the details about the competition, including the names of the competitors and the results, can be found in the World Curling Federation's Historical Results site, here. 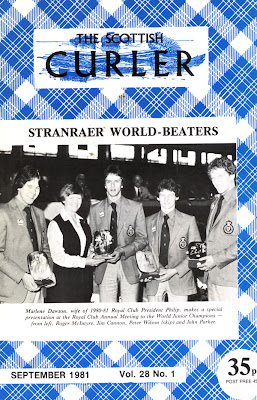 The result was well received back in Scotland, coming as it did on the back of the 1980 success. There was even an open topped bus for the team at the airport!

The Scottish Curler magazine in September 1981 featured the team on the cover, Marlene Dawson making a special presentation to the four Stranraer curlers at the Annual Meeting of the Royal Caledonian Curling Club.

The top photo is from the April 1981 Scottish Curler. The photographer is not named.
Posted by Bob Cowan at 16:57