'A termination the most melancholy put to the bonspiel' 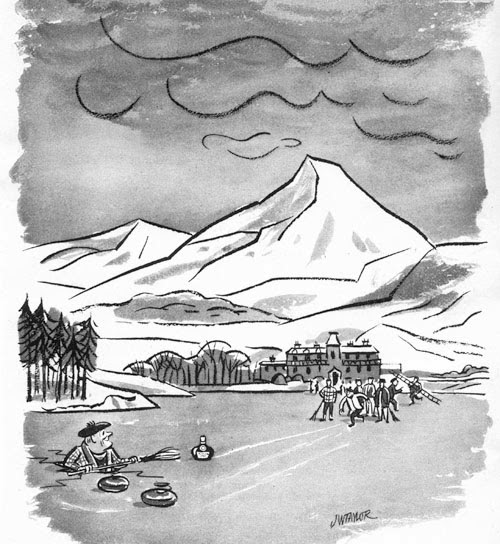 I came across this cartoon recently. These days it would be seen by many to be in bad taste. It was published in Punch in 1958, and drawn by J W Taylor. Taylor was not one of the more famous Punch cartoonists, but he has at least one big fan, see here. His university education was in Manchester, and he became a school teacher in Stoke. One has to conclude it is unlikely that he had ever personally experienced the joys of curling outside on a deep water loch. I wonder what prompted him to draw this cartoon. However, there is just a nod to the dangers - one of the figures in the background is rushing to the rescue with a ladder!

Of course, if we go back to the eighteenth century and early nineteenth century, long before indoor rinks, and before the first artificial outdoor rinks had been invented, curling was only ever played on natural stretches of water. I quote from David B Smith's 1981 book Curling: an illustrated history, "The advantage of such lochs was their size, their responsiveness to the roar of the stone, their picturesque beauty." David goes on to mention that the disadvantage of deep water is the time it takes to freeze, and that there was a real risk of drowning, should the ice break.

One of the first questions ever posed to David and I when we began this blog back in the summer of 2008 was, "How common was drowning in the years gone by?" David responded to the question with this post.  Therein he recounted that he had found only one report of death by drowning at a curling match. The reference is in Sir Richard Broun's Memorabilia Curliana Mabenensia, which was written in 1830. The author describes how successful the curlers of Lochmaben had been in matches with neighbouring parishes. Broun writes, "It is sufficient to say, that they have been successful over Tinwald, Torthorwald, Dumfries, Mouswald, Cummertrees, Annan, Dryfesdale, Hutton, Wamphray, Applegarth, Johnstone - and perhaps Kirkmichael might have been added to the list, but for the occurrence of a most disastrous accident by which six individuals were drowned, and a termination the most melancholy put to the bonspiel." He then goes on to give details of the battles between Lochmaben and Closeburn, with no further mention of what appears to be a 'curling disaster'.

In searching the British Newspaper Archive for instances where curlers had come to grief on outside ice, I had found no mention of any accident at Lochmaben when curlers had been drowned. I found a number of stories of curlers falling through the ice, all over the country, but without loss of life. But what struck me - forcibly - was just how many tragic stories there were during the nineteenth century about people who had been skating or sliding on the ice, and died! Local newspapers throughout Britain regularly contained reports of fatal ice accidents during the winter months.

I had come to the conclusion that the reason there was so little information in Broun's book was that the accident had all occurred way back in time, and that the occasion had been passed on simply by word of mouth. But then I got the opportunity to study the original reference, in Memorabilia Curliana Mabenensia. It occurs in Chapter VI of the book, which is entitled 'Bonspielana'. In the paragraph before that about Lochmaben's bonspiel successes, there is reference to famous Lochmaben curlers who had been at the top of their form during the time of the 'French War'. This was a reference to the Napoleonic Wars, which finished with the Battle of Waterloo in 1815. Broun's reference to the Lochmaben tragedy likely dated to the early nineteenth century, a time well covered by papers in the British Newspaper Archive. It then struck me that Broun does not say explicitly that it was curlers who had drowned, only that there had been 'a most disastrous accident'. I searched more generally in the BNA for ice accidents at Lochmaben. No success. Had there been any ice accident in Kirkmichael parish? Eureka! There had ... and it was the one referred to in Broun's book. The story was all well recorded in The Scots Magazine of February 1, 1813, and the Caledonian Mercury of February 4, 1813.

So, we need to go back two hundred years. At that time, travelling any distance was not easy, and curlers from one parish were somewhat restricted to playing against those of neighbouring parishes. Lochmaben's first curling club, the Lochmaben Curling Society, was not constituted until 1823, as Lynne Longmore has recorded in detail in Minutes of Note, see here. Ten years before that date, the curlers of Kirkmichael parish had received a challenge from those of Lochmaben parish and they had met on one of the Lochmaben lochs on Friday, January 29, 1813. The home side was successful and the two groups of curlers agreed to meet again the following day, Saturday, January 30, on Cumrue Loch in Kirkmichael parish. There was 'a vast concourse of spectators' when the match got underway in the morning. By two o'clock 'the ice had become so soft and wet, that it was agreed to change the board, and a few of the young men then attending, went in search of another; they immediately pitched upon one, and while the curlers were carrying their stones towards this new rink, they perceived the ice to give way, and in one moment saw the whole group of young men and boys sink.' Ten persons went in the water, which was around twelve foot deep. Five were rescued, one of the rescuers taking off his coat and holding its edge to use it as a rope, linking hands with others on the ice behind him.

The bodies of the others were recovered later using two ladders tied together to bridge the hole in the ice. All five who died were under 23 years of age. They were William McGill (Corshill), James Paterson (Auchenclurehill), James Dalzell (Parkgate), Robert Muirman (who was a servant in Dalfibble, married with two children) and Peter Carruthers (also a servant in Dalfibble). Singled out for praise for their part in the rescue of the others were James McGill (Corshill) and James Roddan (Pleasance). Presumably William and James McGill were related.

I wondered if all those who died had been locals. Dalfibble is a farm to the west of Cumrue Loch. Parkgate may refer to the farm or the community, again west of Cumrue. I have found old references to 'Pleasance, Kirkmichael', but don't know exactly where this was. And where were Corshill, and Auchenclurehill? I cannot yet find these names on old maps of the area, although Corsua farm is close by.

The story recounted in the newspapers differs in one respect from that in Memorabilia Curliana Mabenensia. The news reports say that there were only five fatalities, whereas Broun indicates that six died. However, it would seem from the newspaper accounts that those who died had not been engaged in the curling match, but were spectators who had tried to help the curlers by seeking out a new place on the loch where a new rink could be laid out. The reports do not mention if the curlers were involved in the rescue attempts, but it is quite apparent why play was abandoned, and why Broun wrote, " ... and a termination the most melancholy put to the bonspiel."

The Lancaster Gazette also ran the story on February 6, 1813, omitting the detail of the curling bonspiel, and putting the blame on two skaters. The report reads, "On Saturday last, as two persons were amusing themselves skaiting on Camrew Loch, in the parish of Kirkmichael, one of them made a dextrous wheel round a number of spectators, who happened to be collected at one place, when the impression of his skaits so weakened the thawing ice, that it instantly gave way, and ten persons were plunged into the water where it was about eleven feet deep." This report also indicates that five were saved, and the rest perished.

Cumrue Loch can be found on modern maps just west of Templand. The grid reference is NY 061860. Lochmaben and Kirkmichael are adjacent parishes. Cumrue Loch is just inside the south east boundary of Kirkmichael parish. It is not (yet) recorded as a 'Curling Place' on the Historical Curling Places database and website. Perhaps because it had been the scene of such a tragedy, the curlers chose not to return there after 1813. 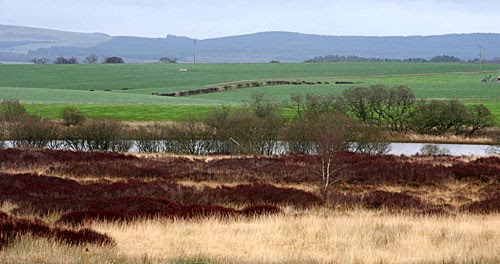 This is Cumrue Loch as it appeared today, a grey December morning in 2013. It sits in the middle of a large dairy farm. My thanks to Brendan, the farmer, for his help in getting me to a spot from where I could take this photo.
Posted by Bob Cowan at 13:32