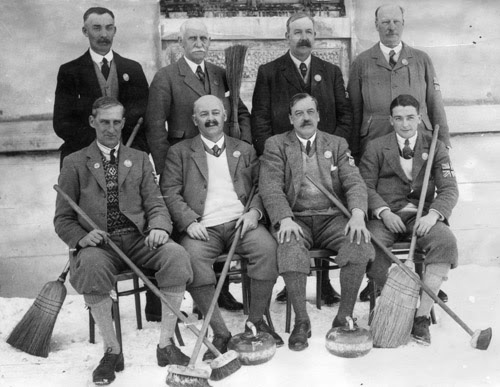 In November I wrote extensively about the curling competition at Chamonix in 1924, the beginning of the sport's Olympic story, see here, here, and here. The gold medals were won by a GB team, four Scots, after a round robin involving just three countries, Britain, Sweden and France. Willie Jackson (skip), Robin Welsh (3rd), Tom Murray (2nd) and Laurence Jackson (lead) won both their games to become champions. The GB 'squad' included four others: Colonel T S Robertson-Aikman, Major D G Astley, John MacLeod and William Brown, who travelled to Chamonix as the team's reserves.

That's the squad in the photo above. The team which played and won the championship is seated. L-R: Tom Murray, Willie Jackson, Robin Welsh and Laurence Jackson. The reserves are standing. L-R: William Brown, Colonel Robertson-Aikman, John MacLeod and Major Astley.

Today's post debunks the myth that one of the GB reserves also played for Sweden in the Olympic competition.

The story has come to be accepted as fact, and has been retold online and in print, but is a distraction to the real events of the 1924 curling competition. I show now that the assertion is completely false. No-one from the GB squad played for Sweden in the 1924 Olympic curling competition!

The story originated in a short exchange which occurred at the Royal Club AGM in the Station Hotel, Perth, on July 23, 1924. This reads as follows:

It was Herald journalist Doug Gillon who first picked up on this exchange, and in his January 2006 article he notes, almost as an aside, "The major (ie Major D G Astley) ended up playing for the Swedes who overcame France in a play-off, finishing runners-up. So the major collected a bona fide Olympic silver, and if the IOC are correct, a gold one as well."

Doug got this completely wrong.

The Chairman mentioned in the exchange above was John McLeod, not Major Astley. There was no 'play-off game' at Chamonix, and that it is unlikely that the four GB reserves received medals. However, McLeod did have connections with Sweden, so perhaps the story that he had played for Sweden had some credence. I speculated in this post what might have happened.

But even then I was not convinced the story was true. It all seemed so unlikely. I decided to go back to square one, and look at all the evidence again. The penny - eventually - dropped, after reading all the discussions of the Royal Club AGM, as recorded in the Annual of the Royal Caledonian Curling Club for 1924-25.


The problem is that the exchange reproduced above, from the verbatim minutes, has been taken out of context.

A member, William Henderson of Lawton, was questioning the meeting Chairman, John McLeod, within a discussion about sending funds to the British Olympic Association. Henderson asks, "Tell us if any of the members of this Olympic Team were members of the Swedish Team as well."

Later in the discussion at the AGM, Henderson says, "It is perfectly obvious, I think, that a great many of the curlers who take part in these games, such as the Olympic Games, the Games in Sweden, and the Games in Canada are selected, in some cases, three or four times." Henderson goes on to say, "A great many of the curlers who take part in these Games are the same individuals time and again."
I believe now that when Henderson asked the question of the Chairman if he had been a member of 'the Swedish Team', he was referring, not to the Swedish team at the Olympics, but to the Royal Club Tour Team that went to Sweden some years previously. It was McLeod's participation on the Swedish tour, ie the 1920 'Swedish Team', that Henderson was asking about. Henderson asked this to back up his argument that ordinary members of the Royal Caledonian Curling Club were not being given an opportunity to represent their country in international events. He was trying to establish that McLeod, who had been one of the squad in Chamonix, had also been on an official tour to Sweden previously, as Jackson, Murray, Astley, and Robertson-Aikman had all been to Canada on previous tours.

It all makes sense now. At least, it does to me! I hope that the interpretation above meets with general approval. My fellow blogger, David Smith, the former Sheriff of Kilmarnock, is convinced.

In summary, there is no evidence at all that one of the GB reserves also played for Sweden in the Olympic curling competition in 1924.

The photo of the GB curling squad comes from a scrapbook kept by Tom Murray, now in the care of his great granddaughter, and reproduced with her permission.
Posted by Bob Cowan at 11:36