"When was the sport of curling first played?" is a question that is often asked. "Sixteenth century Scotland", is probably the best response, but that answer needs qualification.

What can be said with certainty is that the sport was being played in and around the town of Perth, Scotland, at the end of the sixteenth century and the beginning of the seventeenth century. We know this because the first printed references to 'curling' and 'curling stones' occur in a publication which dates from 1638, and was probably written some years before in 1620. 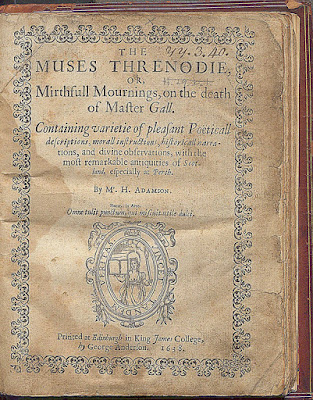 The publication, whose title page is shown above, is called 'The Muses Threnodie, or, Mirthful Mournings on the Death of Master Gall. Containing varietie of pleasant poeticall descriptions, morall instructions, historiall narrations, and divine observations, with the most remarkable antiquities of Scotland, especially at Perth'. The author was Henry Adamson, and it was printed at Edinburgh in King James College by George Anderson, 1638.

It comprises two poems written by Henry Adamson, occasioned by the untimely death, from tuberculosis, of a Perth merchant called James Gall. Rather than mourn Gall himself, Adamson makes George Ruthven the chief mourner. Ruthven was a respected physician and surgeon in Perth, and was 92 years old when the poems were published. Both Gall and Ruthven were real people, well known to the author of the poems.

The author, Henry Adamson, calls himself 'a student in Divine, and Humane Learning'. Born in 1581, he trained as a priest, but became a school teacher in Perth. It seems that he wrote the poems for his own amusement, not intending for them to be published, and at first resisted suggestions from friends to do so. Eventually, William Drummond of Hawthornden, Scotland's most respected poet at the time, see here, persuaded Adamson to have them printed. Indeed, a letter from Drummond, signed 'W.D.', is included as a preliminary page of 'The Muses Threnodie'. Adamson died the year after his poems were published, aged 58.

Adamson's works were reprinted in the eighteenth century, under the same title, but with the following on the title page: 'To this new edition is added explanatory notes and observations by James Cant'. Cant calls himself 'the Editor'. This two volume work was 'printed by George Johnston for the Editor and Robert Morrison, Bookseller, 1774'.

There are a number of significant differences in the two editions. I shall call the 1638 volume 'the original 1638 book', and the later book, 'Cant's 1774 edition'.

Adamson sets the scene in his first poem 'The Inventarie of the Gabions in M George, his Cabinet'. Adamson seems to have made up the word 'gabions' himself at the time (it was not used back then with the meaning that it has today). We might say 'curiosities' nowadays to explain what Adamson was describing. This is a (relatively) short piece, and can be read in full online here. Here's one passage from it: 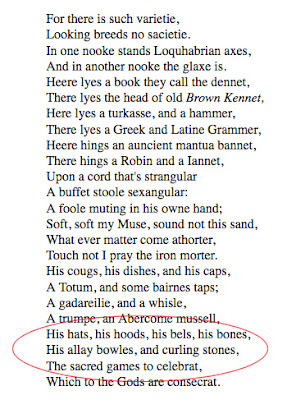 'His hats, his hoods, his bels, his bones,
His allay bowles, and curling stones,
The sacred games to celebrat ....'

It can be concluded from this that Georve Ruthven, the doctor, had played both bowls and curling. As noted before, if he was 92 in 1638, then his sporting days would have been when he was a younger man - and that puts the sport being played in Perth back into the sixteenth century!

Adamson's main poem 'The Muses Threnodie' itself, is in nine parts, or 'muses'. You can find all online, in a readable form, on the allpoetry.com website.

The curling reference is in the First Muse, transcribed here, from where the above is extracted.

I must admit I don't find either poem an easy read, but the device Adamson uses is to have the various 'curiosities' of George Ruthven's closet mourn for the deceased James Gall. In the passage above, golf clubs get a mention (the poems are an early reference to this sport too), as do curling stones:

'And ye, my loadstones, of Lednochian lakes,
Collected from the loughs, where watrie snakes
Do much abound, take unto you a part,
And mourn for Gall, who lov'd you with his heart'

Now, Adamson realised that his reference to 'loadstones, of Lednochian lakes' might not be understood, so in the margin of the original 1638 book, opposite to the 'loadstones' reference, is printed the two words 'Curling Stones'! In the digitised versions of the poem online this is missing in most cases.

As Gall had apparently loved his curling stones, we can assume that he also loved the sport itself. The evidence suggests then that James Gall was a curler!

In Cant's 1774 edition, the editor removes the reference to 'curling stones' from the margin, but adds an explanatory footnote:

'Lednoch is situated about four computed miles north from Perth, on the banks of the Almond River; about this place the best curling stones were found. The gentlemen of Perth, fond of this athletic winter diversion on a frozen river, sent and brought from Lednoch their curling stones.'

This fits in with what we assume about early curling, that the players obtained their stones from the beds of rivers where they had been shaped and smoothed by the action of the water. However, Cant was writing perhaps 150 years after Adamson had penned the original poems, so just how much he knew about curling and the curlers of Perth at the beginning of the seventeenth century is questionable. But the association with Lednoch does seem secure enough.

The Reverend John Kerr in The History of Curling and Fifty Years of the Royal Caledonian Curling Club, published in 1898, writes extensively about Adamson's poems. He records that James Gall died in 1620, perhaps only twenty-five years of age, and that Adamson wrote the poems in that year.

But all these writers missed something very important! It took a young(ish) lecturer at Glasgow University in 1980 to have the idea of looking at the original 1638 book, of which that University had a copy in its Special Collections, and so discover another key reference. The original book actually says that James Gall was a curler!

In a preface to his poems, Adamson has written the above about James Gall. He was 'a citizen of Perth, and a gentleman of goodly stature, and pregnant wit, much given to pastime, as golf, archery, curling, and jovial company.'

It could not be clearer that here was someone who loved his sport - both golf and curling, and enjoyed fun company. Nearly four hundred years later we probably all know friends who fit this description.

Why hadn't this obvious reference been noted sooner? I suspect that the rarity of the original volume was the reason. Cant's 1774 edition does not include the preface. This important reference to curling - the first time the sport is mentioned in print - must have been overlooked because no-one had studied the original book in detail, relying only on Cant's 1774 edition. How important it is, especially in these days when information is communicated widely online, to check back and confirm the original source material!

The whole preface which shows that James Gall was a curler, appears in this digitised version online of 'The Inventarie of the Gabions in M George, his Cabinet'.

Two more thoughts. Why did George Ruthven have more than one curling stone in his closet? As far as we are aware, the sport was played in the sixteenth, seventeenth and much of the eighteenth century with one stone for each curler, and the earliest of these stones were 'loofies', without handles. Did Ruthven have stones for different occasions, or did he have spares, to allow friends to play?

Adamson's poems, as well as providing the earliest dated reference to curling and curling stones, give us the names of two Perth curlers - George Ruthven and James Gall. The names should be better known than they are. It is likely that the poems' author Henry Adamson played too - he certainly knew about the sport to have included the mentions described here.

I am most grateful to the helpful staff of the National Library of Scotland in Edinburgh, and at the University of Glasgow Library. Both places hold copies of the original 1638 book and Cant's 1774 edition. The images from the original 1638 book are from the National Library's copy. The other images are screenshots from online digitised copies or scans from books in the author's library.
Posted by Bob Cowan at 10:13