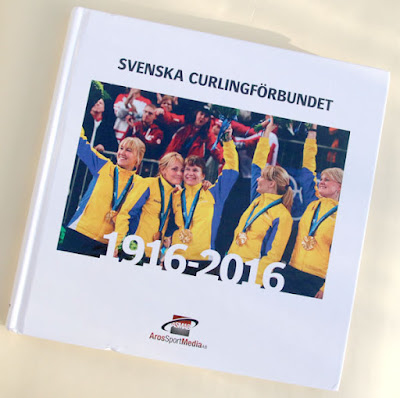 Last year saw the centenary of the Swedish Curling Association. This was marked in a number of ways, not least by the publication of a substantial book, above. This was put together by Hakan Sundstrom, for many years the Swedish Association's Secretary, and Editor of Svensk Curling, the Swedish curling magazine. He commissioned many Swedish curlers and International personalities to contribute chapters. The book is lavishly illustrated, and even if you don't read Swedish, it is a fantastic record of that country's curling achievements over the years. And there are many of these. 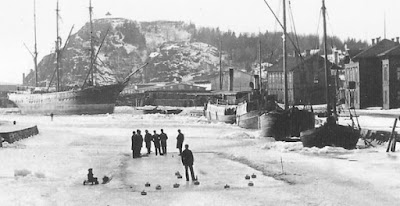 On the back cover of the book is one of the most striking photographs of outside curling that I've even seen! It shows the sport being played in the harbour at Uddevalla, c1895. Curling was being played in Sweden many years before the Swedish Association was formed in 1916, and I was interested to see that Hakan had written a couple of chapters about the early years of curling in his country. You see, there is a well known connection with Scotland.

The first curling book that I ever acquired was Beginner's Guide to Curling by Robin Welsh, back in 1969. Therein I learned that curling had been introduced to Sweden by a Scot, William Andrew Macfie. Since I became interested in curling history, I have often wondered about Macfie. Who was he, and how did he come to settle in Sweden? Where had he curled previously in Scotland, and did any records of that exist? And was he really single-handedly responsible for curling's introduction to Sweden, and the establishment of the country's first curling club in 1852? Hakan kindly sent me translation of the first chapters of the anniversary book, which contain information about Macfie. Hakan notes that Macfie's history in Sweden had to do with love, and 'hungry horses'. I was intrigued, and so set off to see what else I could find from here in Scotland.

The genealogy of the Macfie family is a complicated one, but has been well researched. For our curling connection, we should pick up the family with two of the daughters of Robert Macfie (1745/46 - 1827). It was Robert Macfie who started a grocery concern in Greenock in 1769 which evolved into a successful sugar refining business. He married Mary Andrew in 1772. The couple had eleven children, not all of whom survived into adulthood. Among those who did were Margaret, who was born in August, 1774, and Janet (known as Jessy) who was born in September 1790, the eleventh of the recorded children. Robert Macfie bought Langhouse, in Inverkip, in 1798.

The older sister, Margaret, married a seaman called James Macfie in 1799. It seems not to be known if James Macfie, with the same surname, was kin, or from a different branch of the family. The couple had four children, William Andrew Macfie (our Swedish curling pioneer) being born on March 21, 1807. His father apparently was lost at sea that same year. William then was brought up by his mother, a single parent.

William and Jessy's fourth child, called Jessie, was born on October 18, 1818. They were to have ten children, all bar one surviving into adulthood. The family moved to Sweden in 1823. Jonas Berg and Bo Lagercrantz in their book Scots in Sweden published by the Swedish Institute, Stockholm, in 1962, explain why. William's younger brother, James, had emigrated to Gothenburg where he became a wholesale merchant. With a fellow Scot, William Brodie, he ran the wholesale firm of Brodie and Thorburn. But he ran into financial difficulties, and his older brother William was sent over to Sweden to 'clear things up'. Apparently William liked the country so much that he bought the estate of Kasen, outside Uddevalla (on the west coast of Sweden north of Gothenburg). According to Berg and Lagercrantz, William Thorburn brought his wife and young family to Sweden in 1823. Jessie, the daughter, would have been just four or five years old when the move to Sweden was made.

Back in Scotland, Margaret Macfie was raising her son William Andrew. According to this web page, about 1815 a considerable share in the business of Macfie, Lindsay and Company was given to her, to assist her in bringing up her family. A few years later William Andrew entered the concern as an apprentice, and he subsequently became a partner in it and remained with the firm until 1837, when he was thirty years old. Just what his business interests were then, and how he supported himself financially at this time, is not clear.

Presumably Macfie had met his first cousin, Jessie Thorburn, from Sweden, on family gatherings in previous years. Whatever the details of their courtship, the couple were married in Leith on January 16, 1839. Jessie was twenty-one, and her husband ten years older. Given that the birth records of their first three children can be found in the parish records of Greenock West church, it can be assumed that for the first few years of their married lives they lived in the Greenock area. In these records, William Andrew Macfie is described as a 'merchant'.

According to Hakan Sundstrom's research, the couple lived in Scotland for a while, but Jessie missed Sweden, and wanted to be near her parents. In 1845 they emigrated and settled down on a farm at Anfasteröd, twenty kilometres south of Uddevalla, and close to Kasen where her mother was. 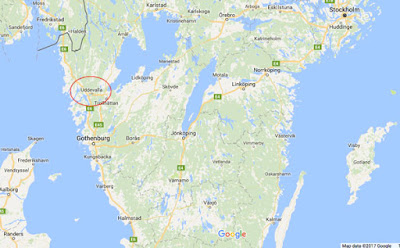 This map is to show just where in Sweden Uddevalla is.

By 1845 the couple had had four children. Their first child, James, born in Greenock in 1840, was to die in Sweden in 1846. Their second son, William, born in 1841, had only lived for a few months. Margaret, a daughter born in 1844, only lived for three years. One can surmise that the couple's early years in Sweden were not a happy time. But they were to go on to have thirteen children, although only five survived to adulthood.

Macfie's father in law, William Thorburn, had established an export company in 1823 on his move to Sweden. The company also had shipping interests. In 1845, when William Andrew Macfie, now 38, arrived in Sweden, his cousins William Franklin Thorburn and Robert Thorburn were just 25 and 17 years of age. These two were to take over the family business when their father died in 1851.

Where do the 'hungry horses' come into things? One of the Thorburn interests was grain export. In England, London's population grew rapidly in Victorian times. Above ground transport generally, and the movement of goods around the city, depended entirely on horses, see here. And all these horses needed to be fed. Swedish oats were in demand!

By the 1870s, oat exports from Sweden contributed some 17% of the country's total exports, and the Thorburn company contributing more that a quarter of this, see here. It was very profitable for the family.

Given that his wife's brothers, who were also his cousins, were running the company, it is certainly likely that Macfie, somewhat older, became involved in that business enterprise too. Exactly what Macfie's role in the company was, and what his other business activities in Sweden were, remain to be researched. Hakan Sundstrom notes that Macfie became a wealthy businessman.

So, what about Macfie's curling antecedents? Hakan Sundstrom writes, "Macfie was a curler and curling stones were in the household that year, and he began playing with these on frozen lakes in the area. It took a few years for William Andrew Macfie to spread his curling interest to friends in the neighborhood in Uddevalla, but on March 5, 1852, Bohuslänska Curlingklubben was formed as the first curling club in Europe outside the United Kingdom." The Bohuslän Curling Club still exists and has active teams in the second division of the Swedish league system.

But was Macfie really a curler before emigrating to Sweden? That has been impossible to prove, so far. Growing up in Renfrewshire in the early nineteenth century, Macfie would certainly have been aware of curling. Of the clubs in the neighbourhood of Greenock, Ardgowan, instituted in 1841, is the oldest, but Macfie's name does not appear when lists of members were first printed in Royal Caledonian Curling Club Annuals. What, if any, curling Macfie played in Scotland prior to his marriage and relocation to Sweden remains unknown.

Was the introduction of curling to Uddevalla just Macfie's idea alone? That suggestion deserves more scrutiny. His cousins would certainly have known of the game. William Thorburn had been sent back to Scotland for his schooling. Interestingly, William Thorburn is credited along with Macfie with the introduction of curling to Sweden, see here, and by Jonas Berg and Bo Lagercrantz in their book Scots in Sweden. Early documents from the Bohuslänska Curlingklubben are now in the archives of the Bohuslän museum in Uddevalla, and it will be interesting to see if there were any other Scots involved with the club in its earliest years.

Macfie was certainly a driving force. Hakan Sundrom writes, "In addition to the curling stones Macfie imported from Scotland, members of Bohuslän also tried to get Swedish stone manufacture. 'Granite company C A Kullgren's Enka' in Uddevalla made some stones in the hard granite. They were well made and beautiful but when they began to play with them, it turned out that the granite was not sufficiently elastic to withstand the tough hits." The company to which Hakan refers has a Wikipedia entry, see here. I wonder if any of these early curling stones have found a home in the Bohuslän museum, or elsewhere?

The Bohuslänska Curlingklubben attracted those in the upper level of society from Uddevalla, and received royal patronage. This tidbit comes from Scots in Sweden, "The game was played in furs and silk-hats, often to the accompaniment of music by the Regimental Band."

Hakan writes much more about the Bohuslänska Curlingklubben, how efforts were made to spread the sport, and how it eventually became established, leading to the formation of a national organisation. But all this will be for another time.

I will finish here with just a little more about William Andrew Macfie. He died in 1899, his wife Jessie having passed away in 1883. A photo of him has survived. 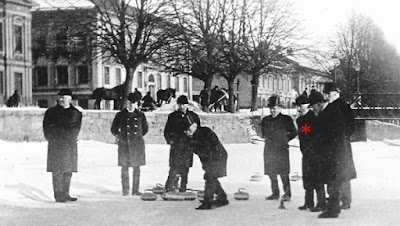 The anniversary book contains this image which shows curling on the river which flows through Uddevalla. It is captioned 'Members of Bohuslänska Curlingklubben play on the river ice in Uddevalla'. Amongst those who can be identified is William Andrew Macfie, who is third from the right (asterisked), and Robert Thorburn furthest to the left. Commissioner Aberg is playing the stone.

Robert Thorburn died in 1896, so the photo must date from before this time. And it is proof that William Andrew Macfie retained his interest in curling well into his old age.

There is a Thorburn-Macfie family society in Sweden established in 1937 which today unites some several hundred descendants of the Macfie and Thorburn famililies, see here. I wonder if any of them have information of William Andrew Macfie's life in Sweden.

My thanks to Hakan Sundstrom for translating his chapters from Svenskcurlingforbundet 1916-2016 and allowing me to quote them. The photos above are from the book.

Scots in Sweden by Jonas Berg and Bo Lagercrantz was published by the Swedish Institute, Stockholm, in 1962 to go with a similarly titled exhibition at the Royal Scottish Museum in Edinburgh in the summer of that year. I consulted the book at the National Library of Scotland.

The detailed genealogy of the Macfie family can be found here. I was able to find birth records of William and Jessie's family thanks to the Scotland's People website.

The map of Sweden is courtesy of Google maps.
Posted by Bob Cowan at 15:04