In the 1800s, the railways brought curlers from far and wide to participate in Scotland's great bonspiels. Chief amongst these was the Grand Match. The Royal Club's pond at Carsebreck had its own halt on the nearby railway, see here, and curlers had only a short walk with their stones to get to the ice. Close access to a railway line enabled play on Lochmaben's Castle Loch, and on Castle Semple Loch at Lochwinnoch.

In other places, although the railway brought participants close to a loch or curling pond, there was still some distance to be covered to get to the ice surface itself.

Here's just one example. In January, 1892, planning was well advanced for the Northern Counties Provincial Curling Association's bonspiel on Loch-na-Sanais, near Inverness. The Association's secretary, James A Gossip, ran a large advertisement in the Inverness Courier of January 19, 1892, with the draw involving seventy teams which would take part. Various arrangements had been made with the Highland Railway to facilitate the match. For example, there were to be special fares for players. If necessary, a special carriage would be attached to the goods train departing Inverness for the south at 9.15 pm, for those who intended to attend the evening dinner.

Curling stones were to be carried 'free of charge', but at 'owner's risk'. Each curling stone, or its basket, had to be numbered for its particular rink, and as many as possible forwarded by early trains to facilitate conveyance to the Loch.

The advert stated, "Conveyances will be in readiness at Inverness to convey players and stones to the Loch. Return fare for each player, 1/-."

I wondered what these 'conveyances' would have been like. Loch-na-Sanais was several kilometres from Inverness railway station, and the 'conveyances' mentioned would have been horse drawn. That got me thinking that horses were the unsung heroes of these great curling events. I wondered if there were any stories that mentioned horses in connection with curling bonspiels. I found a number, and here are three examples. 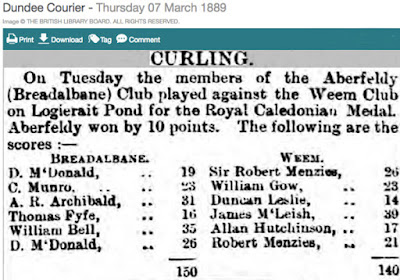 The first is in connection with a match between the curling clubs of Breadalbane Aberfeldy and Weem for a Royal Club District Medal. Both clubs were located near Aberfeldy, and long-time rivals. The match was reported in the newspapers at the time, as shown by the clipping from the Dundee Courier of March 7, 1889, above. Although this was just a match between two clubs, it was a significant bonspiel, each club being represented by six teams of four players each. Royal Club records show that the match, held on Tuesday, March 5, took four hours to complete, and that the umpire was Charles Munro. He was the secretary of the Breadalbane Aberfeldy club. This was all above board, as when awarding the medal for the two clubs to contest, the Royal Club had stipulated 'own umpire'. The venue though was a neutral one, the Logierait pond (here), about 20 km to the east. On the day the ice was 'stiff', and the medal was won by Aberfeldy with a margin of ten shots, 150-140.

One of the illustrations gives a general view of play on the Logierait pond. The author explained that although great bonspiels gave a national character to the game of curling, "... the most enjoyable encounters are those which take place on local ponds between parish and district clubs. Such contests are carried out will all the fierceness and hard fighting of a clan fray, although there is little blood spilling." One of the main functions of the Royal Caledonian Curling Club in the nineteenth century was to promote such inter-club contests, by awarding District Medals for such matches.

Rockwood's article confirms that both sets of curlers, and their stones, had travelled by train, and that the stones had been carted to the pond from nearby Ballinluig station. 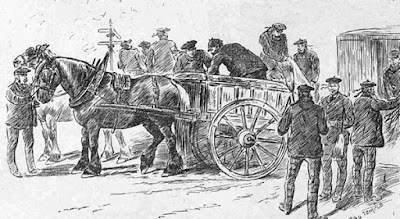 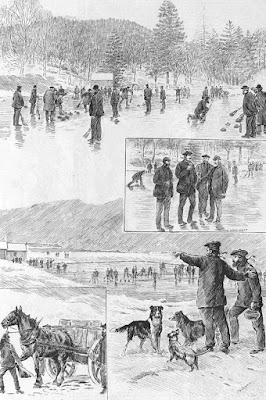 Three years later, on February 6, 1892, the Illustrated Sporting and Dramatic News again included a full page montage of illustrations entitled, 'Curling at Aberfeldy and Birnam'. This includes views of play at two different locations, although it is not clear just where these were. 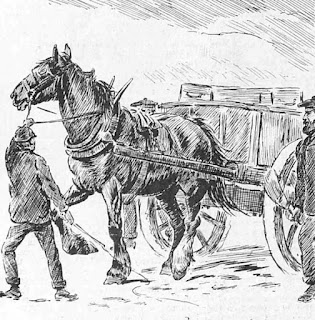 One of the images is of a horse and cart, above, with the caption, 'Up the snow clad hill with the stones'. This is by the same illustrator as before, J G Temple. The illustrations accompany another article by Rockwood about curling in general, and about the rivalry between the Weem CC and the Breadalbane Aberfeldy CC. He writes, "Long ere the cart has zig zagged its way up the hill to Birnam Pond, through the deep-frozen ruts, the rinks have been mapped out."

The reference to 'Birnam Pond' had me puzzled for a while. Birnam is a long way from Aberfeldy, and I wondered at first if a pond in the Birnam/Dunkeld area had been a neutral venue for another District Medal Match. However, that did not seem plausible, given that Rockwood's text made clear that the two groups of curlers met after their game for 'beef and greens' in an Aberfeldy hotel.

The answer became apparent on studying locations where curling had been played in the Aberfeldy area, on the Historical Curling Places website. This showed me that Loch-na-Craig, a lochan some three miles to the south-east of Aberfeldy, had been used in previous years as a venue for matches between Weem and Aberfeldy, see here. Today the loch can be found just off the A826, which is the road you would take from Aberfeldy if you were heading towards Birnam. Hence, perhaps, 'Birnam Pond'!

And getting to that pond would involve an uphill climb. I am now convinced that this is the venue illustrated in the lower of the two views in the Illustrated Sporting and Dramatic News montage. The top pond, which shows one surrounded by trees, could well be the Aberfeldy CC's pond at Pitillie (or Pittiely), see here, opened in 1885. 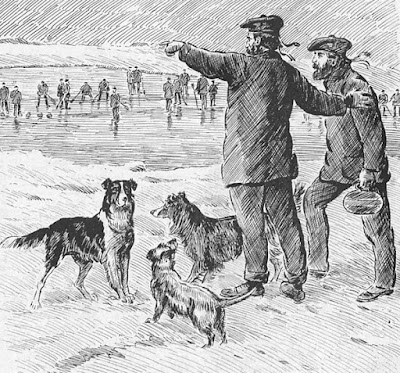 The last horse related story is a sad one, from reports of the Scotland v England international in 1895 on Talkin Tarn, near Brampton. David Smith wrote in 2011 about this match here. The British Newspaper Archive can now provide contemporary reports of the bonspiel. The Dundee Courier on January 30, with the headline 'The International Bonspiel: Great Victory for Scotland', does not record any problems, mentioning that 'the ice was splendid' and that 90 rinks had been laid out in three parallel rows. The paper recorded that Scotland had won by 1087 shots to to 842. The Glasgow Herald on the same day reported positively on the match, noting that special trains were run from Glasgow, Edinburgh, Liverpool, Manchester and Yorkshire.

The Dundee Evening Telegraph, sister to the Dundee Courier, had time to include rather more detail in its report of the match. This report included the information, "The 'get ready' gun was fired at one o'clock, and a few minutes later the gun to commence play sounded, but some delay occurred owing to carting arrangements not being equal to the strain put upon them." The article continued, "Two hours and a half was the time appointed for play, but owing to the late arrival of the stones, some rinks only played one hour and a half."

So what had been the problems with the 'carting arrangements'?

The Leeds Mercury of January 30 explained that the match had originally been scheduled for the previous Thursday, but did not go ahead that day because of a thaw. The paper suggests that some local farmers had been available to help transport stones on that first occasion, but, because of their disappointment then, had chosen not to turn out on January 29, the day that the match did go ahead.

The Leeds Mercury report sought blame elsewhere and was critical of the railway company, saying, "The North-Eastern Railway Company, it was said, had undertaken to do all the necessary carting, but if they did, they are not to be congratulated on the perfection of their arrangements." The paper notes that only eight carts were available, and that one of these was rendered useless 'as the horse when breasting a particularly steep bit of hill dropped down dead. The players had to get their stones to the tarn as well as they were able, with the consequence that the late arrivals were not able to begin their games at the appointed time'.

The newspaper also suggested that, because most Scots teams had reached the Tarn first, they had had time for practice, implying that this had contributed to the English defeat.

In contrast, the Yorkshire Post and Leeds Intelligencer report of the match was much more measured, saying, "The Tarn is about a mile from Brampton Station, and the curling stones had to be carted from the station to the Tarn. This led to some delay, and many of the rinks were later than others in starting, some being about three quarters of an hour behind. There had been a heavy fall of snow in the night, and the road from the station to the Tarn was very difficult to traverse - so bad was traffic that the stationmaster lost, from heart disease, a valuable horse which was conveying the stones to the Tarn over the slippery and arduous road." The Shields Daily Gazette printed an identical report.

So, a valuable horse, belonging to the station master at Brampton, died in the service of curlers on January 29, 1895. I wonder if it had a name. For anyone interested in the history of draft horses in the nineteenth century, here is where to start!

Images are © British Library Board, or © Illustrated London News Group, courtesy of the British Newspaper Archive.
Posted by Bob Cowan at 14:38