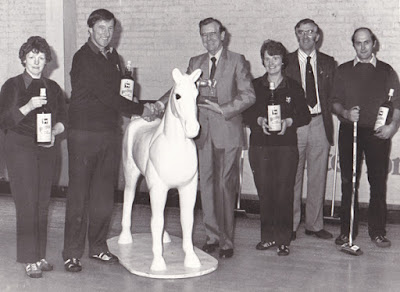 CIP-43. In the early 1980s, White Horse Distillers was just one of many companies which sought to promote their brand by sponsoring curling competitions. Here is a photo of the winners of the White Horse Scotch Whisky bonspiel at Ayr Ice Rink in October, 1982. L-R: Annie Kennedy, Willie Anderson, Stan Crawford (representing the sponsor), Sadie Anderson, Matt Brown (President, Ayr Curling Club) and Jack Kennedy. As White Horse sponsored bonspiels at Lockerbie, Gogar Park, Kirkcaldy and Stranraer, as well as Ayr, in the 1982-83 season, the horse in the picture would have been well travelled! Read about the company here. (8x6in print, by Ron Vavasour, Photographer, Ayr) 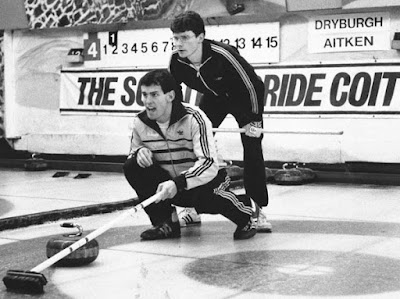 CIP-44. The 'Scottish Pride Coit' was a junior competition at the Greenacres rink in the 1980s. David Aitken (front) and Douglas Dryburgh are in this pic which was published in the November 1985 issue of Curling. (8.5x6.5in print, by John Elder.) 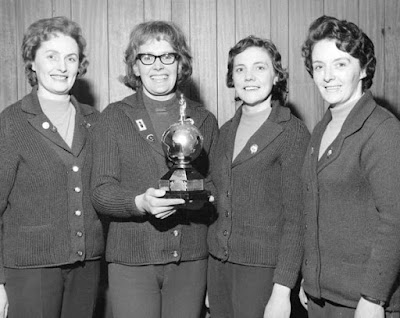 CIP-45. I consider this to be the most beautiful curling trophy of them all! It was presented for play in 1958 by R B Dick for the 'Ladies Worlds' at the Scottish Ice Rink, Crossmyloof, Glasgow. This is the winning team in 1972. I find it interesting that the photo is captioned as follows, L-R: Mrs M Dickson (3rd), Mrs B Lindsay (skip), Mrs H Hamilton and Mrs M Bankier. There is no mention of first names with the photo or in the accompanying article in the April 1972 Scottish Curler magazine! I know that it was Margaret Dickson and Beth Lindsay, but can anyone supply first names for Mrs Hamilton and Mrs Bankier? (ADDED LATER: Thanks to Ali Taylor we now know that it was Helen Hamilton, and Margaret Bankier, both of whom were members of Lesmahagow Ladies CC.)

Two other things to note about this competition in 1972. The final rounds were played through power cuts (during the miners' strike of 1972), with the Crossmyloof rink improvising lighting with its own generator. And the losing finalists were a team from the Glasgow Young Curlers Club skipped by Maureen Horton. This competition pre-dated by twenty years the first 'official' women's world championship in 1979. (10x8in print, by Elmer Fromberg, Cameracraft, Clarkston Road, Glasgow.) 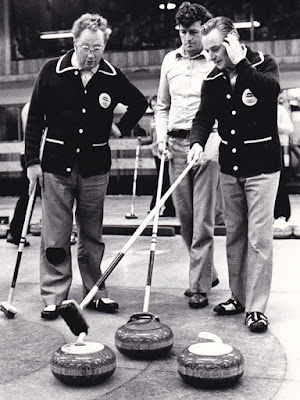 CIP-46. The caption written on the back of this photo says, "Robert Mirtle, Jim Asher and Eric Brown puzzling last shot of the tournament." So, which competition is it, where, and when? (6x8in print, by Blair Urquart.)

ADDED LATER: Thanks to Ali Asher and Harold Forrester for the information that the pic dates to 1976, and was from the first 'Inverness Invitation' competition, sponsored by Grouse Whisky. There is a short report in the January 1977 Scottish Curler magazine. Twenty invited teams from all over Scotland took part, but the final was between two 'Highland' rinks. Eric Brown, with Robert Mirtle, Jim Asher and Graeme Kerr, beat Billy MacLeod's Aviemore side. The magazine has a 'presention pic' of the winners. Back then 'action pics' of curling in Scotland in print were really quite rare. 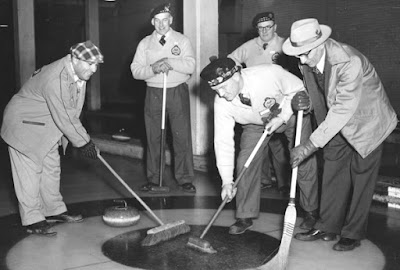 CIP-47. I have absolutely no idea what's going on in this pic. Suggestions please! (7x5in print, photographer unknown.) 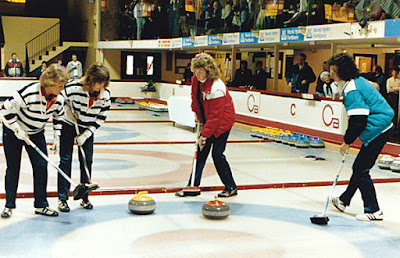 CIP-48. This is a scene from the final of the Clydesdale Bank Scottish Ladies' Championship at Perth in 1989. Christine Allison, on the right, has been directing her front end of Kimmie Brown and Carol Dawson (on 3rd player Margaret Scott's stone). Opposition skip Lorna Bain looks ready to sweep. Was it an attempted freeze that has curled too much? The Allison team won the championship that year. Lorna, with Julie Hepburn, Vicky Ross and Liz Moffat were runners-up. (7x5in colour print, by Louis Flood, Perth.) 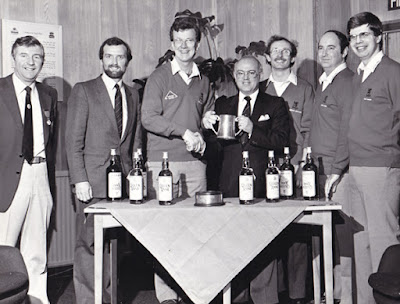 (Note to self - must keep a note of all the different 'alcohol sponsors' that come up in these twentieth century pix!)

Photos are as credited where the photographer is known. Check the archive (on the right) for previous Curling Image Project posts. Thanks to Alison Taylor for supplying missing names for the Ladies Worlds pic.
Posted by Bob Cowan at 10:20