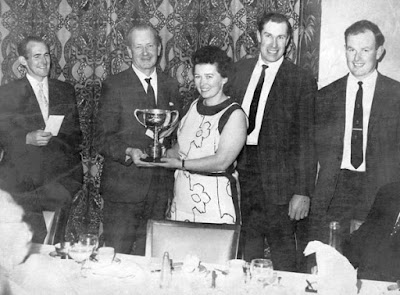 The Curling Image Project is taking a bit of a break, as I contemplate a house move over the next few months. The image above is a good place to start when considering the success, or otherwise, of the project.

But first a bit of history! It all began when in 2015 I learned about Sports Heritage Scotland, see here, and was intrigued by the posibilities of the various reminiscence projects that were being discussed, all to help patients with memory problems and dementia. Curling was one of the sports signed up to the Sports Heritage Scotland, with both the Royal Caledonian Curling Club and the Scottish Curling Trust among the original partners. I provided a number of old photographs to a fledgling Curling Memories Project, against the day that perhaps these might be useful.

Sorting through old photographs made me realise that perhaps I could myself provide a database of curling images for future use. I thought the best way to do this would be to post an image each day, building up a weekly collection of seven images in a Curling History Blog post, which could be viewed on a tablet or computer, or printed out. There are twenty-two weeks' worth of images now online, see here. Any individual week can be highlighted by clicking on the title of the post, and then printed.

The project needed a name, and so 'The Curling Image Project' was coined, somewhat grandly, but better than 'Bob's Old Photos'.

The positive on having these photos now on the blog is that they are there to use, in a permanent form, and I have been heartened by the comments that I have received. The photos themselves are varied in their content, and this is deliberate, given the underlying use to which they might be put.

I am sure that we all will know someone with Alzheimers, be it family or friend. It is just a horrible condition. It is especially bad for those who remember the sufferer when they were fully fit.

The photo above shows (L-R) John McFadzean, John Hutchison, Janet McMillan, John Wilson and Eric Johnston in 1971. The team had won the final of the 'big holiday competition' (now known of course as the Dalrymple Cup) where the winners of fourteen weekend competitions played off at the end of the season, with a Mediterranean Holiday to be won. Although the competition was to become a mixed event, in the early years it was open, explaining why in 1971 it was won by the team in the photograph.

Our team of young curlers from Glasgow were always very well received on our first forays to Stranraer's new rink. In 1971, I met Johnny McFadzean, playing lead for Hutch, and we hit it off from the start. I have the happiest memories of Johnny, May, and the children, at their farm (Airylick). In the mid 1970s, we curled together with our wives, and enjoyed holidays in Ibiza and Tenerife (thanks Hammy!). We hillwalked and we bothied. In the 1980s we walked the West Highland Way together, and then in 1983 hiked across Nepal to the Everest Base Camp area. We shared a love of the outdoors, of books, and of gardening.

Sadly, the Johnny I knew then is no more, a victim of that disease which causes sufferers to completely lose memory. I fortunately still have wonderful memories of Johnny and his family, and the adventures we had together. I wish he had too.

I trust I'll be able to return to The Curling Image Project in some months time.

(8x6 inch photo, by FH McCarlie, Stranraer. My email address is in the sidebar if you want to contact me.)
Posted by Bob Cowan at 16:01