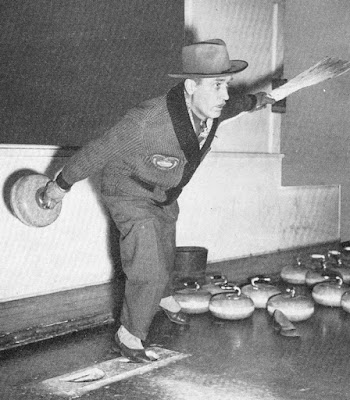 Ken Watson (above) was a native of Manitoba, Canada. He was a schoolteacher in Winnipeg for twenty years. His team won the Canadian Brier Championship three times, in 1936, 1942 and 1949. He should be remembered as one of curling's 'greatest'!

But this article is not about his curling career, but rather what he turned to when he retired from the game, especially the books that he wrote.

His first book about the sport was published by Copp Clark in 1950. There are two versions, a hardback and a paperback. The book sold over 150,000 copies and covered strategy, sweeping techniques and the psychology of team play, among other subjects. 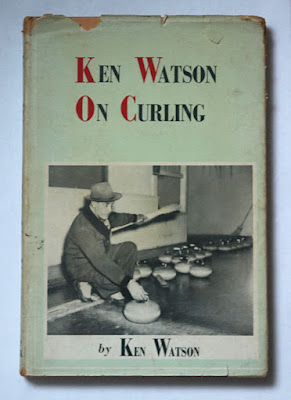 Here's one of my copies of his first book. This hardback above retains its dust jacket, but it is a bit tattered, and has obviously 'had a life', before I purchased it. It is special for me because it has the author's signature inside. 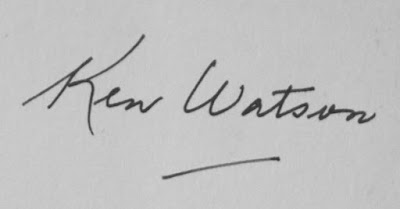 I never met Ken Watson, but he certainly influenced my curling career. Soon after I took to the ice in the early 1960s, I became aware that it had been Watson who had 'invented' the sliding delivery, which my school friends and I were trying to master at the Scottish Ice Rink, Crossmyloof, Glasgow. As my horizons in the sport grew, I learned that Watson had been involved in helping organise the first competitive international matches between Scotland and Canada, for the Scotch Cup. And the Scottish Curler magazine regularly published articles about our sport authored by 'Mr Curler', as Watson was often called.

There are five main chapters in Ken Watson on Curling: 1. The Fundamentals of Delivery; 2. The Sliding Delivery; 3. More Ways to Better Curling; 4. Strategy in Skipping; 5. The Psychology of Team Play.

Although the sport has moved on in many ways since 1950, the book remains a fascinating read. 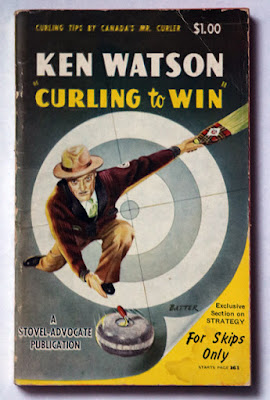 Curling to Win is the first of three paperbacks written by Watson in the years that followed. This 221 page book was printed and published by Stovel-Advocate Press, Winnipeg, in 1955. The book is a compilation of articles about the sport, mostly written for The Toronto Telegram. The paper's sports editor, R W Hewitson, says, "For two winters now The Toronto Telegram has carried Ken Watson's articles on curling. They have proved so popular The Telegram will carry a further series. Many of the curling fraternity have asked for these articles in book form. This long felt want has now been met. The articles in The Telegram, and those in the book, cover all phases of the game. The articles and the book are a must in any curling family."

There are seventy-eight articles in the book. Most are instructional, even to giving advice on dealing with 'crooked ice'! Although he enjoyed curling on perfect ice, Watson opined that "... it would tend to develop carefree delivery, less attentive sweeping for position, and lack-lustre skipping. Even curling brains can be lulled by the repetitive monotony of every rock following a preconceived pattern blueprinted by precise ice that harbours no secrets and therefore offers no challenge, either to a nimble mind or a smooth, unerring delivery."

Yes, Ken Watson could certainly be provocative. He enjoyed the challenge of reading ice that was 'twisted'. He concludes his article with, "Next time you play on crooked ice, accept the challenge that it offers and don't blame the icemaker. Thank him for making a better curler out of you." I doubt that many of today's competitive curlers would subscribe to this view!

I liked 'Love Thy Lead', and the chapter on 'Let the Kids Curl' is of interest as, when it was written, there were few, if any, school children curling in Scotland. There is an 'exclusive' section 'For Skips Only', sealed with a red sticker, which is 'dedicated to the skip and his unenviable role as the captain of his team'.

There are a number of photos, embedded in the text. 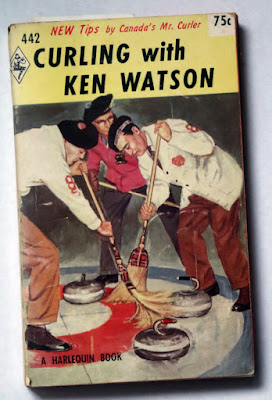 Curling with Ken Watson was published in 1958 by Harlequin Books, Winnipeg. This continued the format as a compilation of articles Watson had written for newspapers, these being syndicated across Canada. Don H Pilling, the Managing Editor of the Lethbridge Herald, writes, "Ken Watson's articles have proved to be one of the most popular features we have ever carried. He is a curling expert who writes with authority and knowledge."

New is this compilation were articles with advice for women curlers: 'For Ladies Only', 'Swing Milady - Swing!', 'Watch the Left Foot - Girls!', and 'More Hints for the Ladies'. His coverage of how to handle crooked ice is continued in a fascinating article entitled 'Hollows and Humps'. There is even a historical article about the 'Red Jackets', who were Toronto Curling Club teams from the 1860s and 70s.

Aside from his general articles, Curling with Ken Watson included articles that the author had written as a correspondent covering the Canadian Championship for the Macdonald Brier trophy at Moncton, New Brunswick, in 1956, the event in 1957 at Kingston, and at Victoria in 1958. These provided the excuse to include glossy photographs, such as those below, courtesy of Macdonald Tobacco Inc.

Although somewhat dark, the images do give a sense of the action. This one is captioned 'A tense moment during the Ontario-Manitoba playoff game of the Macdonald Brier in Moncton in 1956. Bill Walsh makes a superb draw to cut out two Ontario stones'. (The promotional film of the 1956 Brier has been digitised, see here, and the playoff game is covered in some detail.) 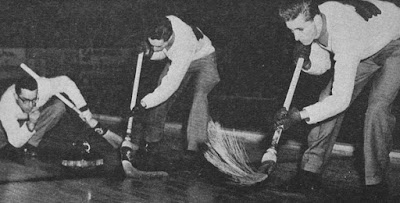 This image is from the 1958 Brier, and is captioned, 'A splendid action shot of the agile adolescents who captured the fancy of the fans at the Victoria Arena during the 1958 Brier.' This is the Terry Braunstein team representing Manitoba. The skip was nineteen years old, and the team the youngest to compete in the Canadian Championship. (See them in action in the 1958 promotional film here.) 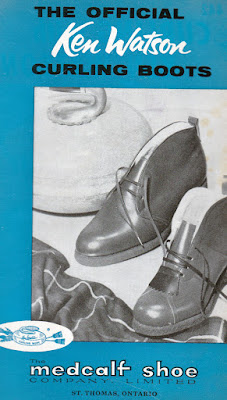 An early entry to the marketing world, Ken Watson allowed his name to be associated with a brand of curling shoes, available into the 1970s. Mens' and women's curling boots were made. This image appeared on the inside front cover of Curling with Ken Watson. 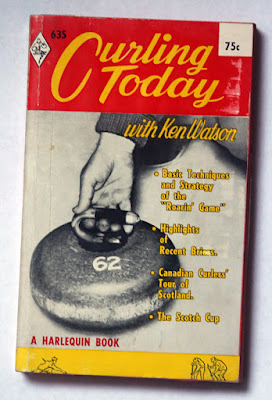 Curling Today with Ken Watson was also published by Harlequin in 1961, and runs to 224 pages. By this time, his curling articles were syndicated in more than fifty Canadian newspapers. This book in a compilation of many of these articles. I found his insights about curling in Scotland in 'A Skip's Dilemma in Bonnie Scotland', and 'Dusters and Dollies', particularly amusing. The author also experienced curling on outside ice for the first time at Lasswade. The book contains articles and comment about the Canadian Curlers Tour to Scotland in 1960, of which he was a member. It contains fascinating insight into the 1959 Brier at Quebec, the 1960 Brier at Fort William, and the 1961 Brier at Calgary. These were the first years that the Canadian Champions went on to compete against Scotland in the Scotch Cup.

Watson does not pull any punches in his comments about the one-sided nature of these first games in Scotland in 1959, and what the Scots would have to do to match the Canadians in the future. 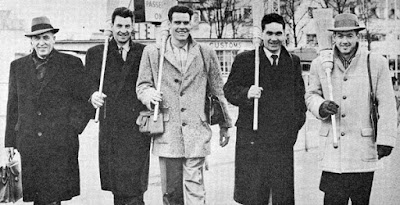 There are a good number of photographs in the book, courtesy of Macdonald Tobacco Inc, and the Scotch Whisky Association. Here is Ken Watson, on the left, arriving with the Ernie Richardson team at Prestwick Airport for the first Scotch Cup matches in March 1959. 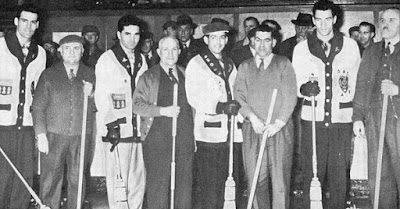 It should be remembered that the first Scotland v Canada matches for the Scotch Cup in 1959 were not organised by the governing bodies. Indeed, the Dominion Curling Association and the Royal Caledonian Curling Club only endorsed them later, after the first set of matches, although one sided, had been such a success. Ken Watson had been one of those who had made these games happen. He would have been forgiven had he praised his own involvement in Curling Today. Modestly, he does not.

Robin Welsh, the Editor of the Scottish Curler magazine, first reprinted a Watson article in his January 1955 issue, as the magazine entered its second year. He notes that the article had been sent to Scotland by Joe Alderson of Winnipeg, and had come into the editor's hands via Arthur Frame. The article was called 'Love thy Lead'. (This is one of the articles that was later included in Curling to Win.) 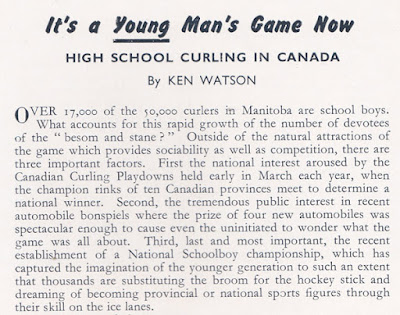 Robin must have contacted Watson and made some sort of an agreement to publish further articles. In November 1955, Vol 2, No 3, of the Scottish Curler contained an article, written by Ken Watson, about high school curling in Canada. That's the first paragraph above. The article must have resonated with the curling establishment here in Scotland, as efforts were soon being made to encourage schoolboys on to the ice at the Crossmyloof rink in Glasgow, and the Haymarket rink in Edinburgh. 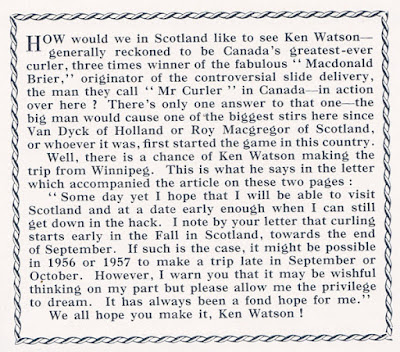 Robin Welsh added this editorial comment. It reveals that Watson hoped to come to Scotland. And in the years that followed he did so. It is not well recorded that Watson toured Scotland prior to the first Scotch Cup matches, visiting various ice rinks, and helping smooth out the many obstacles that faced those organising the international clashes. He worked particularly with the sponsor, the Scotch Whisky Association, and with Jock Waugh.

As previously mentioned, he was a member of the Canadian Tour Team in 1960.

If you wish to see Ken Watson in action, spend a few minutes with this YouTube video, entitled 'A Canadian Cameo', produced in 1952. At the beginning of the video, Watson demonstrates the inturn and outturn, and later on there are some shots from a game.

Ken Watson was a tireless promoter of our sport. He was the first recipient of the World Curling Federation's Elmer Freytag award in 1978. He died, age 81, in Winnipeg, in 1986. He should not be forgotten.

Photos are sourced as indicated, although the photographer(s) are not stated, other than for that at the top of the post, from Ken Watson On Curling, which is credited to Don Dunbar. Hopefully the content of the three paperbacks will be digitised. They contain an important record of the history of curling in the 1950s. Yes, many of the syndicated articles can be found in newpaper archives, but the books bring so many of these together.
Posted by Bob Cowan at 16:10

Murdoch Mysteries series 7 no 14 . Inspector Murdoch ,based in Toronto about 1900 invented the sliding game! Along with his many other inventions ! An amusing episode with a game seen and the Inspector sent off for bad language ! Graeme Adam