I once asked if anyone collected curling event programmes. No-one admitted to so doing. Such programmes are not my own focus, when it comes to collecting curling memorabilia. But in these Covid-19 lockdown months, I've finally got around to sorting out a box of old programmes that I've accumulated over the years. Printed programmes may be on their way out, in favour of web based material. But here are some thoughts on a few paper programmes in my 'collection'. Just domestic events, in this case. 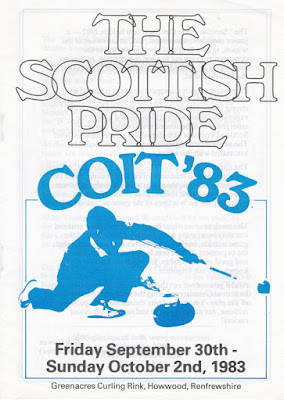 Here's an early programme, the second junior men's invitation at Greenacres. The event was sponsored by the Scottish Milk Marketing Board, 'Scottish Pride' being one of their brands. And of course 'coit' is an older word sometimes used to mean a curling stone. This was a simple programme, including the draw (a double knockout, with consolation event), but without the names of the competitors.

Can you identify the curling silhouette on the front? It is of course Mike Hay, whose team had won the Scottish Junior Championship the previous season. Although his side had competed at Greenacres in 1982, they did not finish on top, that honour going to Martin Turner (skip), Andrew Hemming, Douglas Wood and Andrew Beveridge. 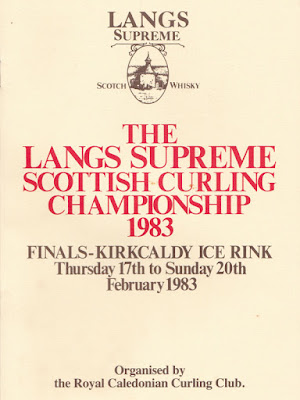 It is no surprise that I've kept this programme. Among the eight teams in the competition was that skipped by Graeme Adam with Ken Horton, Andrew McQuistin, and me, curling out of the Magnum rink in Irvine. We won the title and went on to play in the Silver Broom in Regina. This was the era when curling and Scotch went hand in hand. 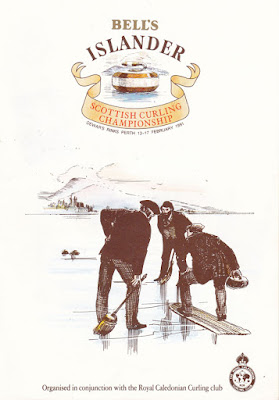 By 1991, the sponsor had changed, and the Scottish Championship was now the Bell's Islander Scottish Curling Championship. Bell's Islander (promoted as 'The Curler's Dram') was, in 1991, 'recently created'. The competition, involving ten teams, was held in the newly opened Dewar's Rinks, in Perth. I'm not sure who designed the programme cover, but the illustration, depicting the game outside, reflects a sport quite different from that taking place inside the Perth venue. But this was no doubt intentional, the notes on the inside cover saying 'It is particularly apt that Scotland's oldest sport should be linked with Scotland's oldest drink'! 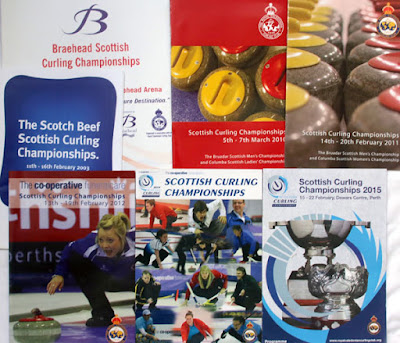 Over the years, there's been a variety of designs for the Scottish Championship programmes. For some years, a couple of pages were devoted to lists of past champions. 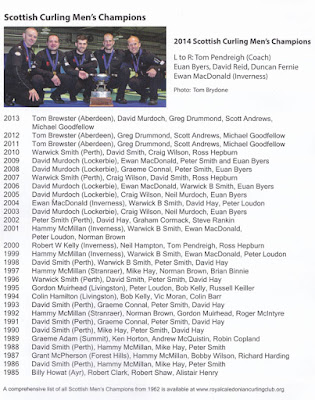 Those who had been champions prior to 1985 had been despatched into oblivion! Someone had decided that we were no longer important enough to be included in the 2015 programme. No, we were not dead, yet! We were very much alive, and previously had enjoyed finding our names, and those of our peers, on the lists of past winners. Now we had been cast aside, considered irrelevant just because of space constraints in a programme. The distress it caused should be a lesson to programme designers. Include ALL, or none, of past winners.

(I blame the fact that this still makes me angry on the effects of the current lockdown!) 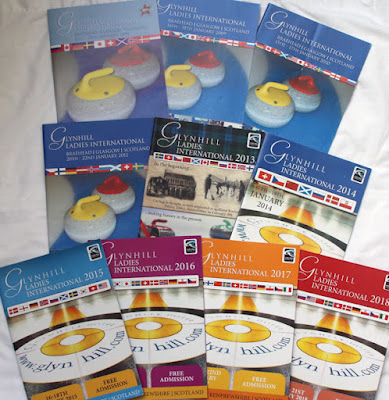 Much more consistent in design over the years, keeping the same font and style, have been the programmes for the Glynhill Ladies International. I have all of these except 2011. Anyone? What was I doing that year that I didn't get to Braehead? And now that the Braehead curling rink has closed for good, perhaps these programmes have a new significance. 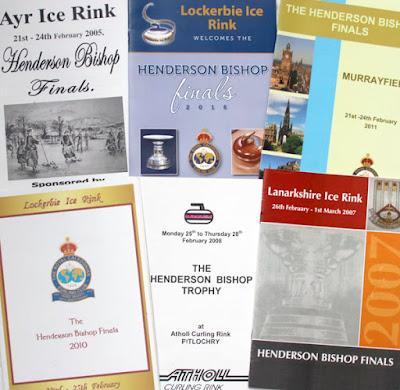 The Henderson Bishop Trophy programmes vary a lot from year to year, as the venue changes, as does the local organising committee. 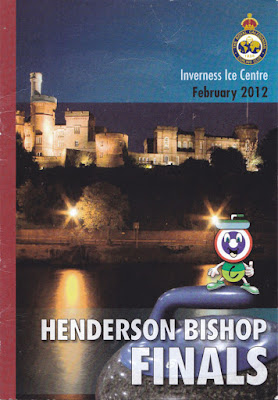 I've picked out this one Henderson Bishop programme. The competition finals were held at the Inverness rink, in February 2012. It's a bit nostalgic for me to remember this competition, as it was the last major event that I photographed, before 'retirement'. 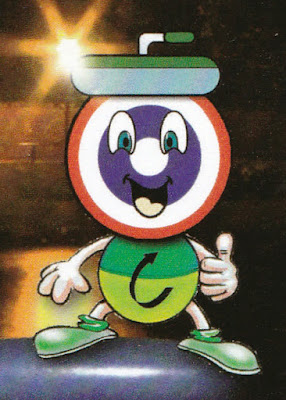 I remain puzzled by the cartoon character on the front cover of the Inverness Henderson Bishop programme. Someone will know the significance of this. Does he/she have a name? 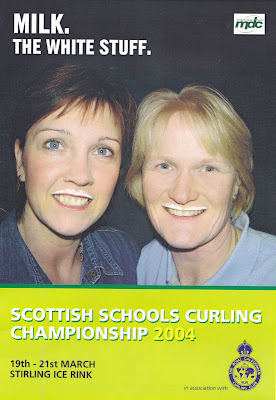 I will wind up this foray into old programmes with this unusual one, which has Jackie Lockhart and Rhona Martin, World and Olympic Champion skips in 2002, with white moustaches! The Scottish Schools Championship 2004 was sponsored by the Milk Development Council. There was a national campaign which had a number of celebrities with white moustaches. 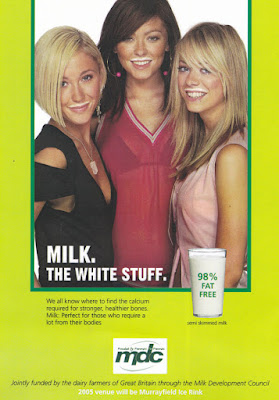 Atomic Kitten featured on the back page of the programme - just a little different from the product adverts that usually appear thereon. 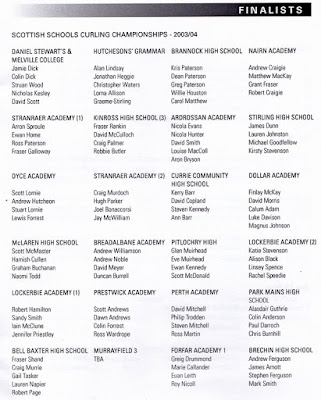 Here are the names of the competitors at Stirling in 2004. One always has to treat such a list with caution, as, on the day of the event, lineups may have changed, for any number of reasons since the programme was printed. But it would be an interesting exercise, to ask a question about retention in the sport, and find out just how many of the young curlers participating in the National Schools Championship in 2004 are still involved curling today. Most will be in their thirties now.

Who won the Schools back in 2004? That was Kerry Barr with her Currie Community High School team of David Copland, Steven Kennedy and Annie Barr. Kerry was the first female skip to win the National Schools title.

International programmes? That's another story, for another day.
Posted by Bob Cowan at 10:28