Did Carlo Pellegrini win an Olympic Gold in 1912 for a painting of a curling scene? 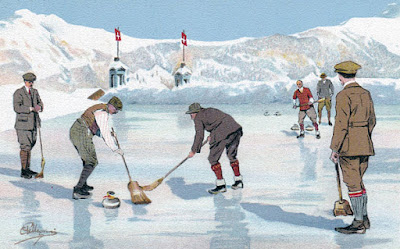 Carlo Pellegrini (1866-1937) provided the artwork for many postcards. Above is a favourite from my own postcard collection. It shows a game in progress on outside ice, in a snow covered landscape. It was published by Vouga and Cie, Geneva, as D10 of a series. It is postally unused and is not dated.

Some months ago I decided that Pellegrini's postcards might make an interesting and colourful post on the Curling History Blog. I set out to find more about the artist, and immediately became fascinated with what I discovered.

Firstly, he should not be confused with his father, also Carlo Pellegrini, the well known caricaturist known as 'Ape'. Carlo Pellegrini of postcard fame was born on October 26, 1866, in Albese con Cassano, in the Province of Como, Italy. He studied at the Brera Academy in Milan, and around 1900 moved to Switzerland. He painted in oils and tempura and was inspired by the winter landscapes and activities of the Engadine, in the south-east of the Swiss Alps. He provided the artwork for many postcards and posters. He died in Geneva in 1937 at the age of 70.

Did you know that there used to be art competitions at the Olympic Games? In 1912, the first of these was held in Stockholm as part of the Fifth Olympiad. In the paintings section of the art competition the Olympic Gold Medal was awarded to Carlo Pellegrini for his submission of 'Three connected friezes representing Winter Sports'.

On learning this, I immediately wondered if one of the 'friezes' showed a curling scene? Would that not be an exciting discovery! I searched the digital world for the artwork, initially with no success.

Information was available about the Olympic competition, and the Official Report was my first stop. 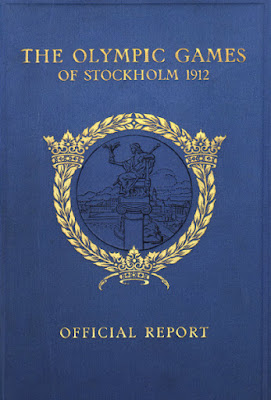 This can be downloaded from here.

Here's the record of Pellegrini's win as noted in the Official Report. Note that his name is misspelled, and his first initial is incorrect, although, as I discovered later, 'G' is his middle initial.

The Official Report has the information that the Stockholm Games included competitions in Architecture, Sculpture, Painting, Music, and Literature. The Jury only considered subjects not previously published, exhibited or performed, and having some direct connection with sport. And that the winner of each of the five competitions would be awarded the 'Gold Olympic Medal'. The exhibits selected were, as far as possible, to be published, exhibited or performed during the Olympic Games of 1912. Competitors had to notify their intention of entering for one or more of these competitions before January 15, 1912, and the exhibits themselves had to be in the hands of the jury before March 1, 1912. There were no limitations as to size or form for manuscripts, plans, drawings or canvasses, but sculptors were required to send in clay models, not exceeding eighty centimetres in height, length or width.

All the medallists' work was exhibited to the public in special premises at 10 Karlavagen, Stockholm.

It was at this point that I came across an article entitled 'Postcard and Poster Artist Carlo Pellegrini, Jr (1866-1937)' by Henry Gessler, which can be found here. This mentions the 'disappearance' of the Olympic paintings. Tantalisingly, the author says, "Recently a large litho (Vouga Series 211 #2), of one of them, has come to light."

It is due to the work of Richard Stanton that I've learned more about the Olympic Art Competitions, and Pellegrini's three friezes of winter sports. 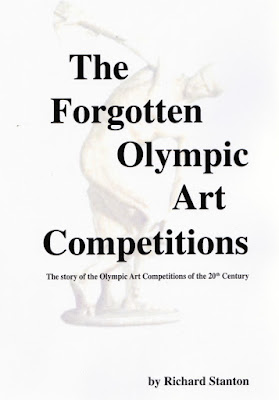 'The Forgotten Olympic Art Competitions', by Richard Stanton, was published in 2000 by Trafford, BC, Canada. It is the result of painstaking research, and is a remarkable work, containing just about everything you need to know about the Olympic Art Competitions in the twentieth century. It runs to 412 pages. Just how these competitions came to be included in the Olympics is a fascinating read. It had been a vision of Baron Pierre de Coubertin, who was responsible for re-establishing the modern Olympic Games in 1896, to include the fine arts alongside sports. He faced many obstacles, but it was at Stockholm that he realised his dream. Stanton charts the journey. Stockholm was a 'first step', and was only a partial success, the inclusion of a Concours d'Art failing to to receive the support of Swedish art associations. 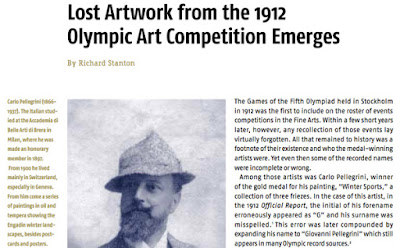 After his book was published Richard Stanton maintained an interest in Carlo Pellegrini and the 'lost friezes'. He made contact with Henry Gessler, and in 2016 wrote an article for the Journal of Olympic History titled, 'Lost Artwork from the 1912 Olympic Art Competition Emerges'. That's a screenshot of part of the first page above, and shows an image of Carlo Pellegrini. Read the whole article here. Stanton writes that two of the three friezes can now be identified. He reproduces one of them in the article. It is a skiing scene. I recognised this immediately.

On January 28, 2009, three chomolithographs went on sale at Christie's in London. All three had been published by Vouga and Cie, Geneva, the company already mentioned as associated with Pellegrini's postcards.

This lot sold for £1375. And it is this image that Stanton reproduces in his 2016 article with the evidence that it is a reproduction of one the Olympic paintings!

Stanton does not reproduce, nor describe, the second of the missing friezes that has come to light. But he does indicate that a reproduction was also sold by Christie's in the same 2009 sale as the chromolithograph described above. Two other Pellegrini lots were in that sale, and one IS a curling scene! Here it is:

In my opinion this is an accurate portrayal of a curling match on outside ice in Switzerland in the first decade of the twentieth century. Curling was popular in that country at that time, many resort hotels having their own curling rinks. To study 'Curling - Chess on Ice' in more detail I have divided the scene into three, but have not removed the yellow cast that is on the image on Christie's website from the 2009 sale. 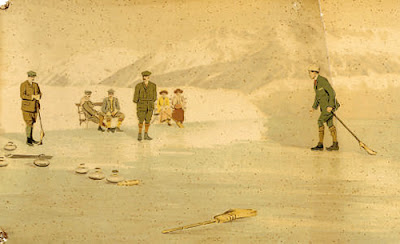 The left side of the artwork shows two players, both with brooms, four seated spectators, and one other standing figure, perhaps the umpire. There are six stones in view, and an apparently discarded corn broom. 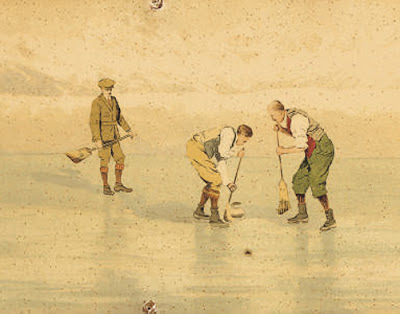 The middle of the scene shows two sweepers both using corn brooms. The curler on the left may be the player who has delivered the stone and followed it up, although it could be a member of the opposing team watching to see the result of the play. 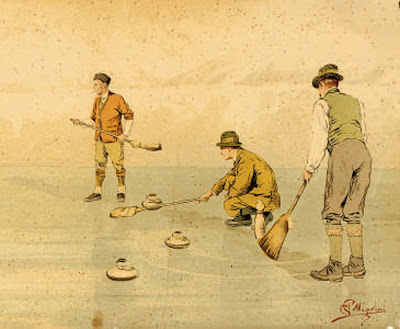 The right side of the scene shows the skip directing the play, the opposition skip and a member of the opposition team. A tee-marker (sometimes referred to as a 'dolly') marks the centre of circles scraped on the ice. The artist's signature is at the bottom right of the piece.

Overall, the condition of the artwork, with its mottled appearance, reflects its age and perhaps how well it had been stored. I wonder if the purchaser has had it restored? And who did buy it in 2009? Has it changed hands since? Does anyone reading this article recognise this artwork?

Unfortunately, I do NOT have confirmation that this is the image that appeared in one of the original Olympic paintings. I feel that it is likely to be so. Both the curling scene, and 'Winter Begins', are reproductions from the same Vouga and Cie Series 220, and are the same size, long and narrow. That's not to say that the original paintings would have been the same size as the reproductions.

The other Pellegrini in the Christie's sale in 2009 is shown below, again with the auction house description.

This sold for £1750. Note the size difference to that of the other lithographs.

Have the original Olympic paintings survived? Surely they would be known of if they had. Henry Gessler notes that Pellegrini's main publisher had been Vouga and Cie, of Geneva, 'until they had a disastrous fire, in which most of his originals were destroyed, probably including the Stockholm Gold Medal trio'. How sad, if that is indeed the case.

Stanton also writes that the diploma, which was awarded alongside Pellegrini's gold medal, is in the Olympic museum in Lausanne. 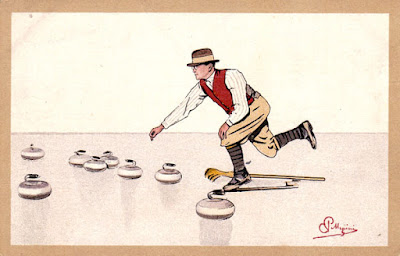 This original postcard was published by Vouga and Cie. It is postally unused. Not dated. No 43 in a series. A stylish delivery from a crampet, with a corn broom alongside. 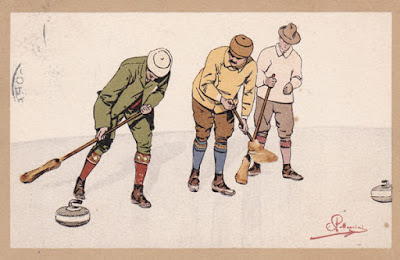 Another original, No 45 in the same series, showing sweepers in action. Postally used. The cancel is not clear, but could be 1911. This would fit in with the age of the stamp which was in use in the years 1909 to 1914. Sent from St Moritz to Hamburg. 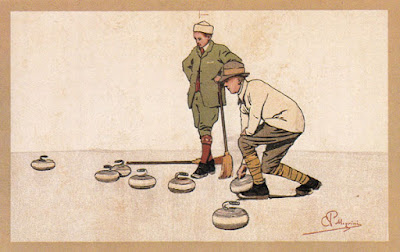 This is a Photoglob reproduction, No 3319 of 'Edition Photoglob SA, 8045 Zurich'. This has the following printed (in French) on the reverse. It is a letter from Baron de Coubertin to the artist. "Dear Mr Pellegrini. The King gave me on Monday at the distribution of the prizes the gold medal which is intended as laureat of the painting competition. I'll bring it back to you on my return if you like. Very friendly congratulations and sincerely yours. Pierre de Coubertin, International Olympic Committee V Stockholm 1912, Saltijobaden (Sweden) 7/20/12."  (Thanks to Google for the translation.) 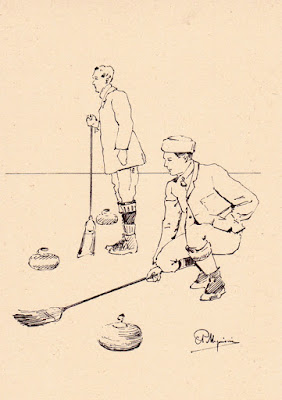 I have two other Pellegrini images in my postcard collection. His images were used on promotional postcards for the Palazzo del Ghiaccio, an ice centre in Milan. 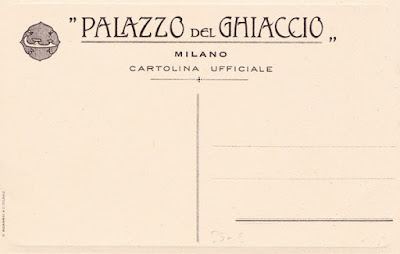 The reverse of the card. The rink opened in December 1923, see here, which suggests that Pellegrini was still working around this time. 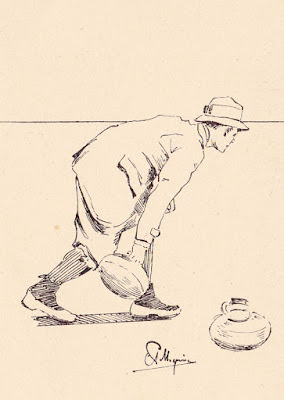 Here's another card from the same series which shows curling - a backswing during a crampet delivery. There's no evidence that curling was ever played in the Milan rink. Others in the same series of cards show different sports.

The search for more information on Pellegrini's three friezes showing winter sports goes on. I think we are close to being able to conclude that the sport of curling featured on one of them. I look forward to being able to say definitively that a painting of the sport of curling won an Olympic gold medal at Stockholm in 1912, twelve years before the sport itself featured in the first 'Winter Olympics' at Chamonix in 1924, see here. Updates will be posted here when more information comes to light.

Other than the images from the 2009 Christie's sale, which are from that company's website, all are from my own postcard collection, or as indicated. As noted above, the work of Richard Stanton has contributed greatly to my knowledge of Olympic Art Competitions. These were abolished after the London Games in 1948.
Posted by Bob Cowan at 09:50