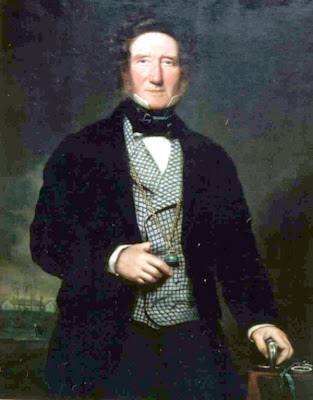 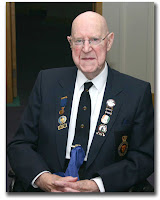 With the recent death of Bob Gardner, pictured at the Royal Club's AGM last year, the curling world lost a great philanthropist. His obituary is here.

Bob's generosity saw him gift a remarkable painting to the Royal Caledonian Curling Club in 2002. David Smith wrote about this in the October 2002 Scottish Curler magazine. This is what he wrote:

'In 1862 the curlers of Bathgate held a big dinner in honour of their president for the previous thirty three years or so, Thomas Durham Weir of Boghead. The large pond in his policies had afforded them curling for decades. The manner in which he was honoured was by the commissioning and presentation to him of his portrait, executed by William Smellie Watson, one of the best painters of his day.

As was the custom in the Victorian era the speeches were long, and they were recorded for posterity. The laird himself distributed them in the form of a small book, privately printed, and entitled, The Bathgate Curlers’ Dinner.

In August 2002 the part played in Scottish curling by another notable curler was marked by the presentation to the RCCC of this very portrait.

Bob Gardner, formerly of Falkirk CC and Council member in 1982-6, acquired the picture and decided to give it to the curlers of Scotland in memory of his late wife Chris.

Christina Anderson Gardner died earlier this year after a long and full life. She began curling in 1960 as a founder member of Falkirk Ladies Sixty CC and such were her keenness for the game and her natural abilities, on and off the ice, that it was inevitable that in 1973-4 she was elected President of the Ladies Branch of the Royal Caledonian Curling Club.

Chris worked tirelessly in the promotion of her favourite game. She and Bob, at their own expense, became ambassadors for curling all over the world, and in particular in its most distant parts. For example, in 1971 they went all the way to New Zealand with a small group of like-minded, curling-daft Scots and played the game there. They also visited Japan in order to promote the game. They were assiduous 'fans' of Scotland at a long series of world championships.

Chris’s greatest claim to fame, however, is that she was largely responsible for the institution of the World Ladies’ Curling Championship, which began in Perth in 1979.

The painting is a three quarter length portrait of a distinguished, middle-aged man. As he faces the painter one can see that his left hand rests upon a fine curling stone handle placed on a table beside a silver medal. In the bottom left corner one can discern curlers at play at Boghead. Round his neck and suspended from a massive gold chain is a large miniature curling stone, of green chalcedony with a gold handle.

Thomas Durham Weir was at the founding of the Grand Caledonian Curling Club. He was one of the group which drew up the first constitution. He was a vice-president for the season 1843-4. He was a keen exponent of the game, who, according to John Kerr, “was always at his best at the head of the [Bathgate] curlers, and with his enthusiastic ‘bravissimo’ he led them on to many a gallant victory.” He not only played in the Grand Match on Linlithgow Loch on 25 January 1848, but he made an impassioned and humorous speech in honour of 'Scotland’s ain grand game o’ curling' at the dinner which followed the historic event. When he died on 31 May 1869, 'universally loved and esteemed', Henry Shanks, the Bathgate poet, celebrated his memory in these lines:

How sad to remember, when frosty December,
Calls forth to the bonspiel her bands full of glee,
No more will he take his stand cheerful with broom in hand,
The pride of the rink, and the joy of the tee.

No more shall we hear again his ‘O be unerring, men!’
All too unerring hath fallen the blow;
No more shall his ringing cheer, trumpet-toned, high, and clear,
Shout o’er the victory, his ‘bravissimo.’

Blow no more over us, blustering Boreas,
Come no more south with thy snow-covered head:
Gone, and for aye, is he who would have welcomed thee;
The Saul of our curlers, our Durham is dead.

Well hast thou played thy part, manly and feeling heart;
How many will miss thee, now bid thee farewell.
Sleep on and sleep soundly. For ever and fondly
The Laird of Boghead in our memories shall dwell.

The curlers of Scotland have every reason to be grateful to Bob Gardner for this extremely generous gift, which at one fell swoop rekindles in us the memory of two notable curlers who both dedicated themselves to 'Scotland’s ain grand game o’ curling', and in their different ways did so much to promote its success.'

Bob Gardner's photo and that of the painting of Thomas Durham Weir are by Bob Cowan.
Posted by Bob Cowan at 22:01