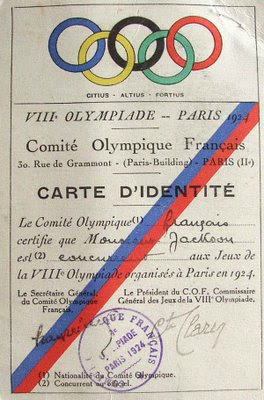 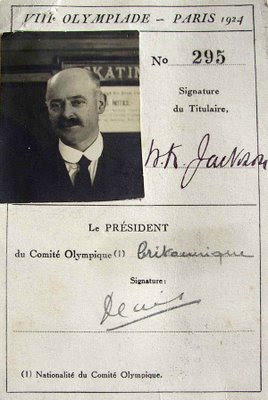 David B Smith writes:
Amongst the objects forming the Jackson Collection acquired recently by the RCCC Charitable Trust (see here) is an ephemeral document, the official identity card of Willie Jackson as a competitor in the Winter Olympic Games at Chamonix in 1924. Of course, the actual gold medals won by WK and his son Laurence were an important reason for acquiring the collection, but this small card very much adds to the feeling of what it was like to be a competitor.

Incidentally, among the objects I was given from the estate of Robin Welsh was a competitor’s badge from the same games, for Robin Welsh, senior, was also a gold medal curler in this rink; and this badge must have been his.

The photographs from Chamonix of the curlers in action are disappointing: none of them is very sharp. I have found one that shows WK holding the brush. Another shows two other members of the winning rink, Robin Welsh and TB Murray, in some sort of action on the ice, which was, of course, in the open air.

Jackson had been famous in curling Scotland before 1924. He was vice-president of the Royal Club in 1921-2. But the Olympic win undoubtedly added to his fame; and he added to his fame every year throughout the Twenties. He was again elected vice-president in 1931-32. Such was the regard in which he was held that he was elected President in 1933-4. In proposing his election Lord Sempill said that apart from farming he had been a justice of the peace and county councillor, a director of Edinburgh Ice Rink, and a member of the Royal Club Council for over twenty years.

Throughout the years Jackson won many, many trophies and great respect, but he also won the affection of everyone as the following poem by the Rev. A. Gordon Mitchell, chaplain of the RCCC, clearly shows. It first appeared in the Annual for 1933-4.

O Willie, Willie Jackson,
In your presiding year
Your legion of admirers
Acclaim you wi’ a cheer.
We’re prood to see ye winnin’
Where ye deserve to be.
We thocht frae the beginnin’
Ye’d reach the Curlin’ Tee.

It is a prood position,
As weel ye ken yoursel’,
Made famous by tradition
O’ them that filled it well;
Fu’ mony a belted Thanie
Was prood to win that chair,
An’ those that lo’e the stanie
Were gled to see them there.

A noble and a rare man
Ye’ve pruived yoursel’ fu’ weel,
Ye’ll mak a peerless chairman,
And, as ye play the spiel
To nane ava a second,
Sae owre us ye’ll preside,
By ane an’ a’ aye reckoned
The curlers’ joy and pride.

Three cheers for Willie Jackson,
The champion of the Rink:
There’s nane will grudge to gie them
That wields the kowe, I think.
Cheer till ye’re hairse and roopit!
And wuss that it may be
His stane may aye be soopit
To sit upon the tee.
Top: WK Jackson’s identity card, front and back. 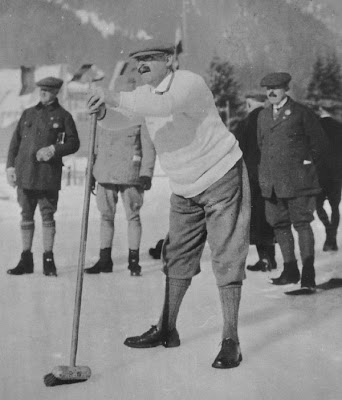 WK Jackson skipping at Chamonix at the Winter Olympics, 1924. 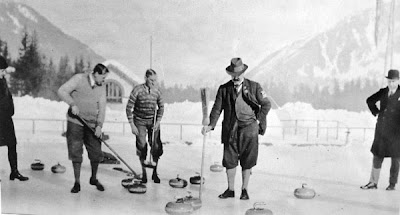 The Great Britain gold medal winning rink at play. Left is Robin Welsh. Next to him is TB Murray. 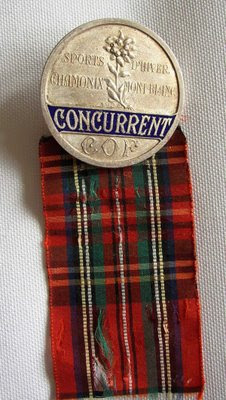 A competitor’s badge, probably that of Robin Welsh. 'Concurrent' is the French for 'competitor'.
Posted by Bob Cowan at 11:20