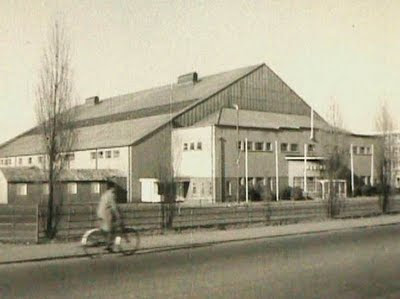 The Scotch Cup international series of matches in 1962 involved four countries. The first and second series of games in 1959 and 1960 had matched Canada and Scotland against each other. The USA became involved in 1961, and in 1962 a Swedish team took part for the first time. The competitors were:

The four teams played a double round robin, the first games at the Falkirk Rink and the second round at the Haymarket Rink, Edinburgh.

The Canadians were undefeated in six games, the USA lost twice to Canada, the Scots lost all their games against Canada and the USA, and the Swedes did not win a game in their first appearance in the Scotch Cup.

The Scotch Whisky Association produced a promotional 16mm cine film after the event. Leslie Ingram-Brown recently had this original film converted to DVD, and he very kindly gave me a copy for my archive. It runs beautifully on the big screen television. I already had a VHS tape, but this is so much better quality. I've edited the DVD content down to two YouTube clips, each less than ten minutes, concentrating on the curling action and discarding the social events and the trip to the Glenkinchie Distillery. It's in black and white of course, and a bit grainy. Commentary is from Doug Maxwell who was to become the executive director of the Air Canada Silver Broom World Curling Championship in 1968.

The first clip, of the Falkirk games, is here. And I bet you smile when the pipers lead the players on to the ice!

The second clip, of the Haymarket games, is here.

It is fascinating to watch our sport fifty years ago. Twelve end games! So many people smoking, even when playing and when sweeping! The old Scottish hack, and the crampit used just by Willie Young. It was the Richardsons who inspired me when I began to play in the early 60s, and I just love watching them even now, particularly with their corn brooms.

Have a look out for faces you might recognise in the crowd!

[IMPORTANT: These clips are on YouTube as 'Unlisted', ie, only those who know the links can view them. They are not searchable. If you wish to share these clips with others that might be interested, please link to this page which you are reading now (the address is:
http://curlinghistory.blogspot.com/2011/08/1962-scotch-cup.html)
rather than directly to the YouTube clips themselves. I think it important that anyone watching the clips knows where they came from, that they have been edited, and can read what is written above. Thanks. Bob Cowan]

The top image is of the Falkirk Rink, long since closed, and is a frame from the DVD.
Posted by Bob Cowan at 00:01

I'm struck by how few countries did that sort of international play not so long ago.

It got me thinking about the curling scene in the Olympics today. China. Japan. Korea. Russia. Brazilian men in the hunt. Turkish ladies, too. What would those early 1960's players think of all of this?

I've been mullng about how much of the "real" spirit of curling is in these new far-flung places such at at the Chinese players' school.

How did those early Scotland/Canada Goodwill tours and international matches really start and why? Any history of regular Goodwill tours or matches other than across the North Atlantic Ocean? Perhaps involving New Zealand?

What an amazing post. These videos are great. I am also in awe of all the smoking!

Curious as to why not embed the videos in the post? Then everything is right there on one page. Folks can view the clips after reading about them, then continue reading.

Also you can link your page in the description of the videos, and even put an annotation directly on the video so someone can link back to the blog post. I think that is just an easier way to get it out there and shared.

I'm glad you like the videos PD. And thank you for your suggestions. I've linked back to the History Blog page to the description below each YouTube video. As for embedding... my experience of this on Blogger has not been positive. I used to do it often, but the videos would regulary disappear in the archives. But the main reason is purely one of size. The videos are considerably wider on the YouTube site than the would be when embedded, and of course can be expanded to watch in full screen there.
Regards. Bob

Thanks for these very nice videos.
It is amazing to see how the game has changed. Most impressive is certainly the speed of the ice/stones. I would assume that a lot of today curlers would have major difficulties to play on such a slow ice.
Congratulation for you site which is a goldmine of curling history.

Thank you so much for this post and blog!! You have given me the opportunity to teach my son about the sport his grandfather, grand-uncle, great grandfather and great great grandfather competed in other than just looking through a book of newspaper articles and medals. You also gave us an extra special glimpse into a wonderful family memory!!
I am so grateful!! (Meg Kleffman Adornetto - Terry Kleffman’s Daughter)