Was Prince Albert a Curler? 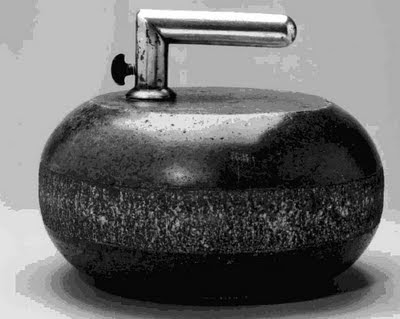 It is well known that the Grand Caledonian Curling Club in 1842 sought royal patronage from HRH Prince Albert and that the prince graciously condescended to bestow that honour upon the young club. The Annual for 1843 records the gift to the prince of a 'splendid pair of Curling Stones, made of the finest Ailsa-Craig granite, most beautifully finished and ornamented, the handles being formed of silver, and bearing an appropriate inscription'.

The presentation was made by the Earl of Mansfield, then president of the Grand Club, at his home of Scone Palace, 'and with a view to illustrate the explanations that were given to Her Majesty by Lord Mansfield, the polished oaken floor of the room was summarily converted into a ‘rink’, and the stones were sent ‘roaring’ along its smooth and even surface.' So impressed was the Queen that she next year granted the club the privilege and honour of using the term 'Royal' in its title.

I long had thought that that was likely to have been the only use ever made of these special stones. My efforts to trace the stones were unsuccessful until early in 2003 when, as I described in an article in October 2003 in the Scottish Curler, I discovered that the stones were in Frogmore House in Windsor Park. Why they were there no one was able to tell me.

My continuing researches recently unearthed a couple of articles which may give a clue. It now seems possible that Prince Albert actually used his presentation stones at Frogmore.

I found in the newspaper John Bull, of January 2, 1847, this exciting piece:

“At the conclusion of the presentation of Her Majesty’s new year’s gifts in the New Riding School, at the Royal Mews, the Queen, His Royal Highness Prince Albert, and a party of upwards of twenty, proceeded across the Home-park to Frogmore, and paid a visit to her Royal Highness the Duchess of Kent. The Prince Consort and the gentlemen of the Royal Household amused themselves for an hour and a half at the Scotch game of curling upon the lake, the ice being in a most excellent state for the enjoyment of the sport. The Royal party afterwards retired to the mansion, and partook of refreshment with the Duchess of Kent, and returned to the Castle at two o’clock.”

The next account appeared in the Glasgow Herald of January 4, the same year:

“The Court still remains at Windsor, and the Queen is engaged in the agreeable occupation of dispensing the hospitalities of the season… Directly after breakfast on Thursday morning, her Majesty, accompanied by the Duchess of Sutherland, and attended by all the ladies of her court, rode to Frogmore in the pony phaetons, and promenaded for several hours in the beautiful grounds surrounding that mansion; whilst His Royal Highness the Prince Consort, and all the gentlemen in his suite, amused themselves by skating and playing at ‘curling’ (as our Scottish neighbours call this fine game) on the ice of the lake…”

Whether the two accounts are speaking of the same game or two separate ones is not clear.

And Prince Albert seems to have passed on his enthusiasm to his second son Prince Alfred, for we see in The Scotsman of 29 February 1864:

“…On Saturday the party [H R H Prince Alfred, Earl of Home, Earl of Dunmore, Lord Henry Scott, MP., Lord Schomberg Ker, Hon. F. Charteris, Sir John Marjoribanks, Colonel Cathcart, &c.] at present sojourning at The Hirsel [the home of the Earl of Home near Coldstream] betook themselves to the loch, where two or three hours were spent in curling and skating…”

Top: A picture of one of the single-soled, common Ailsa stones presented by the Grand Caledonian Curling Club to HRH Prince Albert.

The maker’s hallmark is that of the firm of Robb and Whittet.

The photographs of the Prince’s stones are by courtesy of The Royal Collection, copyright 2003, Her Majesty Queen Elizabeth.