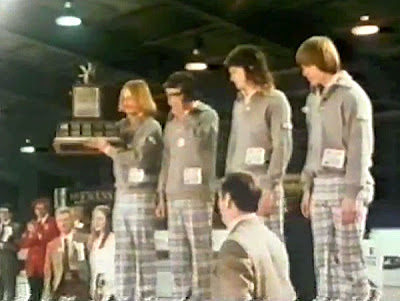 It is more than four years since David and I set up the Curling History Blog. One of the earliest posts, see here, was about the 1976 Uniroyal World Junior Men's Championship at Aviemore. The August 27, 2008, post had been stimulated by Bob Kelly lending me a VHS videotape that had been converted from the 16mm film which Uniroyal made for promotional purposes. I said at the time, "This thirty minute film record of the 1976 event is now on DVD. Perhaps one day (soon) it will be possible for all to see again on the web."

Well, as those who have followed this blog will know, I eventually learned how to post clips on YouTube, for example here is the link to clips of the 1962 Scotch Cup, and here is David Smith on Flog It in 2005.

Recently I was contacted by Viktoria Grahn, whose father Anders played in the Jan Ullsten team which was the runner-up to the Paul Gowsell Canadian rink in 1976. She was looking for a copy of the video for her dad! Viktoria's encouragement was what I needed to get the 1976 Uniroyal footage online. It's in two parts.

Part One is here: http://www.youtube.com/watch?v=5oPazqhKcug

The quality is not as good as it might be, reflecting the fact that the clips were not digitised directly from the 16mm film, but via a VHS tape. Perhaps in the future it may be possible to make a better copy directly from the original. Uniroyal made a promotional film of the event every year. Copies of these films must surely exist, and it would be great if these records of the early days of the World Junior Championship could be made available. It was junior men only back then of course. It was not until 1983 that European junior women had an international competition to play in, and not until 1988 that the first World Junior Women's Championship was held.

I love Bob Picken's commentary. He was the voice of curling in the 70s and 80s. Great to see and hear teams using the corn brooms. Anders Grahn wields a Rink Rat synthetic broom.

Gowsell and his team of Neil Houston, Glen Jackson and Kelly Stearne were exciting to watch! And of course, the footage is a visual record of the Aviemore ice rink which no longer exists.

Fascinating to see the shots of the crowd and of friends I recognise, some, sadly, no longer with us. Sobering to recognise myself! Here I am standing with David Horton and his father (always 'Mr Horton') who did so much to much to encourage us young curlers back in the day). David's younger brother Ken was third on the Scottish team with Bob Kelly (skip), Willie Jamieson and Keith Douglas. All the records of the competition are in the World Curling Federation's historical database here. 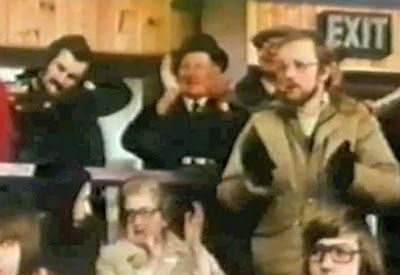 That's me, complete with beard, on the right! Happy days.

The top photo is a screenshot of the victorious Canadians with the Uniroyal trophy.

Thanks again to Bob Kelly for supplying the original VHS tape.
Posted by Bob Cowan at 08:44

I like the reference in the video to "very quick ice ", which was about 3 seconds slower than modern ice.