From at least the beginning of the nineteenth century the medal has been used in Scotland both as a trophy to be won at the curling and as a prize of victory.

When one hears the word 'medal' one instinctively thinks of something like the basic definition of the word to be found in the Oxford English Dictionary, 'a coin-shaped metal object, made especially for commemorative purposes. In these senses, the device may have an attached loop or hole for suspension'. And, indeed, most Scottish curling medals conform with this definition.

I was quite surprised, therefore, when I discovered a different tradition in Sweden.

Although the game was first played in Sweden in 1847 it was not until 1916 that a national association, the Swedish Curling Association (Svenska Curling Forbundet) was founded. In 1917 it began a national championship, and from then it produced plaques, or plaquettes, to serve the same purpose as the medal in Scotland.

These plaquettes are basically rectangular in design although there are some slight divergences from rectangularity in some cases. 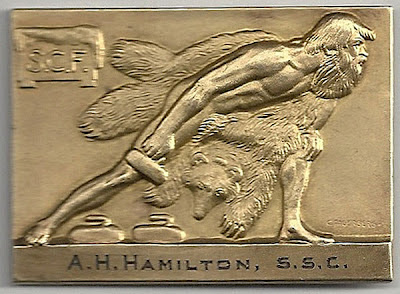 The first plaquette which I came across bears the oldest date. It is a silver-gilt rectangle, bearing on its obverse a most remarkable design, a depiction of a naked, bearded curler delivering a curling stone (above). His modesty is preserved by a bearskin casually thrown over him. The letters SCF show that this was an official production of the Association. There is, moreover, the signature of the Swedish sculptor who designed the piece, Carl Vilhelm Fagerberg.

Engraved on the obverse are: “A.H.HAMILTON, S.S.C.” and on the reverse “FROM SWEDISH CURLING TEAM DEC., 1923”. This was obviously a gift from the Swedish curlers who toured Scotland for the first time in 1923 to the Secretary of the Royal Caledonian Curling Club.

I have another example of this form of the plaquette, this time a prize. It is engraved: 'ST MORITZ CUP/ 1934 1PRIS'. I have seen silver examples and the latest addition to my collection is one in bronze which reads: 'HOTEL ANGLAIS' HEDERSPRIS 1932 3. PRIS'. A 'hederspris' was a presentation prize.

Fagerberg, 1878-1848, was a well-known sculptor many of whose larger works are to be found in Swedish cities. 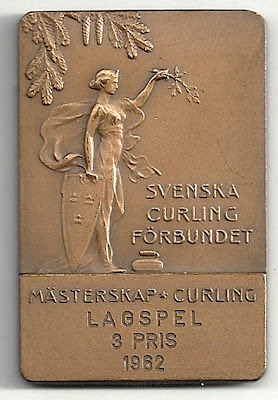 The next design I came upon again involved both the SCA and nakedness, this time in the form of a diaphanously clad female figure with bare feet, standing on the ice with a curling stone in front of her, below a conifer branch. That she has a shield bearing the emblem of Sweden, the three crowns, shows that this was Mother Svea, or Mother Sweden. The legend 'Svenska Curling Forbundet' is part of the struck design. My attempt to find the name of the artist who designed this was unsuccessful, but Lars Lagerqvist of the Myntkabinettet (The Swedish Coin and Medal Cabinet) informed me that this was the first design to be adopted by the SCF in 1917, just the year after its foundation.

(The dates of the three examples I possess are 1944, 1945 and 1962. It is not clear to me whether these were won in national or club competitions for no club name is engraved. Perhaps a Swedish reader might help in this matter.) 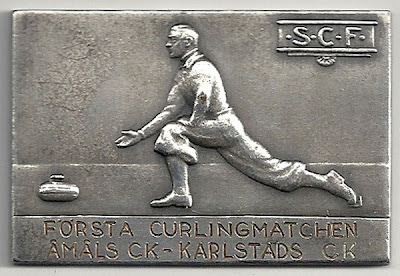 There is another plaquette issued by the SCA and bearing a figure of a plus-foured curler just after he has released his stone. Both of the examples in my collection appear to have been used by clubs. The older example is engraved 'Forsta Curlingmatchen Amals CK Karlstads CK', and it obviously records the first encounter between the named clubs; the second is dated 1969. 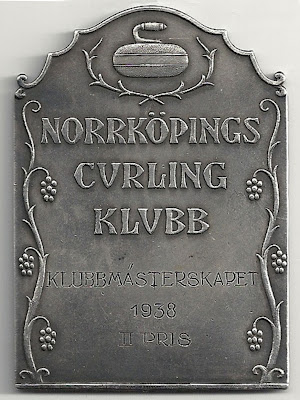 The remaining designs are all club plaquettes. One in silver, dated 1938, was the second prize in the club championship of Norrkopings Curling Klubb. 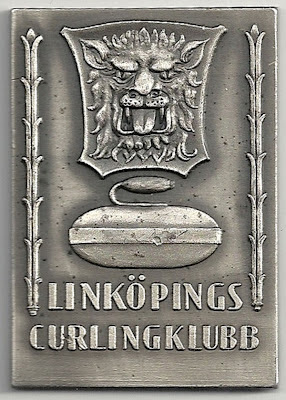 A second played the same role in the club championship of Linkopings Curlingklubb in 1952. 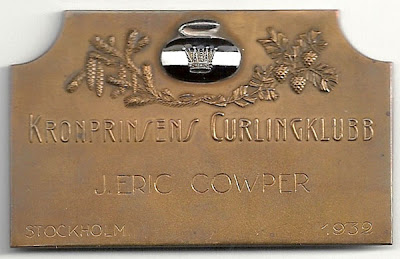 Two are of the same design and were produced in bronze, with the club insignia in black and white enamel, for the Kronprinsens Curlingklubb (The Crown Prince's Curling Club). Of these, one was a presentation to J. Eric Cowper, a Manchester Caledonian curler who was part of an RCCC team which toured Sweden in 1932; the other was a 3rd prize for a competition played in 1948. 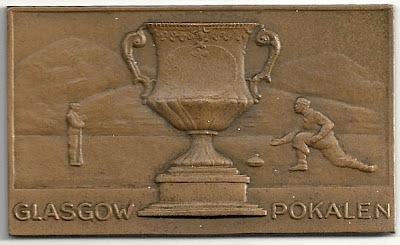 The last plaquette is the largest and is bronze but surrounded in mystery. It has no date, but the legend struck as part of the design, 'GLASGOW POKALEN' (The Glasgow Cup), indicates that it has some Scottish connection. In the design a large cup – presumably THE Glasgow Cup - predominates over a curler throwing a stone and a standing sweeper. My internet searches have failed to find a reference to Glasgow Pokalen.