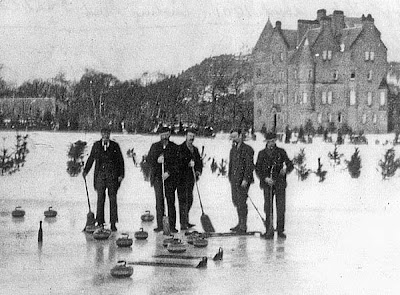 There cannot be many curlers who can point to an old photo from a hundred years ago and say, "That's my great, great grandfather!" Robin Brydone, a young curler from Perth, can do so. You see, the curlers in the photo above, which was taken around 1901, are named on the back as (L-R) J Davidson, G Jenner, J Liney, T McLauchlan and J Gordon. The middle figure is Joe Liney who is Robin's great, great grandfather. The building in the background is Fonab Castle, near Pitlochry.

Note that the curlers all have long handled brooms. Two crampits are side by side on the ice for both right and left-handed play. And on the left is a tee-marker, or 'dolly' (see here).

Lieutenant Colonel George Glas Sandeman bought the Port-na-Craig Estate in 1890, and set out to have a new home built there. Fonab Castle was completed in 1892. He was of the Sandeman family, the firm of George G Sandeman Sons and Company Limited, wine shippers and cotton merchants, having been established in London in 1790 by George Sandeman (1765-1841). From the beginning the founder specialised in wines from the Iberian Peninsula, notably port and sherry. Later the business expanded to include insurance and the export of British linen and cotton goods to the West Indies, Central America and Mexico, see here. It was a profitable business.

The Sandeman family had a property at Roche Court, Wiltshire. George Jenner was head gardener in the employ of the Sandeman family there. Joe Liney also worked on the estate. Joe married George's daughter Alice in 1890 in Wiltshire. Family knowledge says both George and Joe were given the opportunity to move the five hundred miles north to Scotland and work on the new estate. A story has been passed down that George Glas Sandeman particularly wanted Joe to move as he had been teaching one of his sons to bowl at cricket! Joe would have been in his late 20s when he moved to Pitlochry with his wife and family around 1893 or 94.

It is interesting that a curling pond was constructed in the grounds of the new house. The Brydone family history records the story that the trees beside the pond were planted by Joe and his father-in-law, see the photo above. George is also in this photograph. He's second from the left. 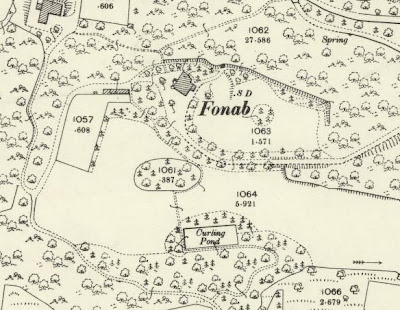 Most of the places where curling is known to have taken place can be found in the Historical Curling Places website. Tracing the history of these places can be done by looking consecutively at old maps, using all those that the National Library of Scotland has made available online, and coming forward in time. This is a great resource for the curling researcher in Scotland! The NLS maps website is here. As an example of what can be found, the screen above is of Fonab, with the curling pond, as shown on the OS 25 inch to the mile map from 1900. 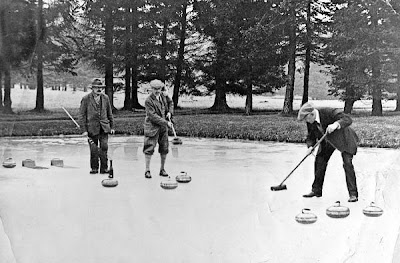 This is another photograph from the Brydone family archive. It is not dated, but is probably post-WW1. It is likely to be of the Fonab pond, and, if so, the trees have grown! The curlers are now using brushes, rather than brooms. Again two crampits are in use, as well as the tee-marker. The curler on the left is Joe Liney. The others are not identified. 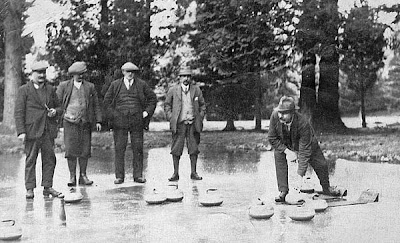 Joe Liney is on the hack in this photo. The four watching are not identified. Again, note the two crampits and the tee-marker. None of those in the photo is carrying a brush. It's almost as if Joe is demonstrating how a stone should be delivered. However, the presence of the stone in the bottom left corner of the photo suggests that the grouping has been set up for the benefit of the photographer!

Colonel and Mrs Kinglake Tower succeeded to the property soon after 1928, and made it their home until 1946 when it was sold to the North of Scotland Hydro-Electric Board, at which time the name reverted to Port-na-Craig House. After being on the 'buildings at risk' register for some years, it has recently been converted into a hotel which opened this year (2013), the Fonab Castle Hotel.

Modern roadworks seem to have obliterated any trace of the pond today.

Joe worked at Fonab Castle all his days and died in Pitlochry in 1943. His wife Alice outlived him and died in Pitlochry in 1956. They did not return to England. They had eleven children. One of them, Rose, who was born just before they moved to Scotland, married Archbald Brydone, who had a son, also Archibald, who fathered Tom Brydone, Robin's dad. Some reading this will know Tom who is often seen in the curling rinks around the country with his camera.

Tom tells me he didn't curl until after meeting his wife-to-be, Lesley, who was already playing the sport at Perth. 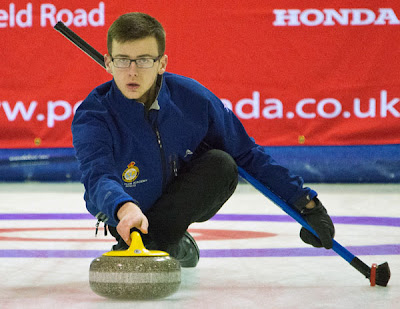 This is their son Robin, who's now sixteen, on the ice at the Dewar's Centre, Perth, last season. He has already made his mark as one of the country's top juniors. He is one of the youngest ever to have won the Royal Caledonian Curling Club's Rink Championship (photo here), and has even been on a team that has scored an eight-ender (see here). I am sure we'll be hearing more about Robin in the years ahead. After all, curling has been in his genes for five generations!