This is a general view of the scene at the Grand Match at Carsebreck on December 24, 1935, from the collection of David B Smith.

December 24, 1935, saw the last Grand Match ever played on the RCCC pond at Carsebreck. It was also the largest, with three hundred and twenty two rinks aside. The North beat the South by 5102 shots to 4206.

The Annual for 1936-7 reports, “As the skips passed the Secretary's office they passed in their cards, which were taken to Edinburgh for the count in the evening. Soon the players were in the trains and setting out on the homeward journey – as jolly and good-natured a company of sportsmen as one could meet in any country. It made little difference to them that rain was beginning to fall. The frost had held just long enough to provide them with a memorable day's sport – one to be discussed, perhaps, for other five years until a great frost comes again to freeze Carsebreck Loch...”

“There were not a few women curlers. One rink consisted of four sisters – the Misses Carnegie, from Colinsburgh, Fife, skipped by Miss Pat. They are well-known players, and their play is on a standard equal to that of many skilled men... An interested spectator of the bonspiel was Mr. Ernest Brown, M.P. For Leith, and Minister of Labour. It was his first visit to Carsebreck.”

The list of results shows that the Misses Carnegie played as Hercules Ladies, and lost 27-3 to a Craigielands team.

Amongst the Royal Club regulations for the Grand Match was:

The Challenge Trophy was commissioned by the Royal Club after the decision was taken at the annual meeting held in 1884 in Southport "to procure a Trophy, so that the energies of 'Keen Curlers' might be roused to friendly rivalry in Auld Scotland's 'Ain Game' for the honour of holding the Prize."

The reason for having the meeting in England was, of course, that Southport had a Glaciarium, on the artificial ice of which the curlers who came to the meeting were able to enjoy several games. 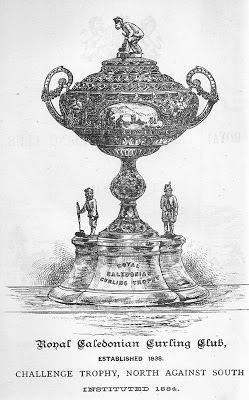 The magnificent, large silver cup was first shown to the members at the next AGM and illustrated as a frontispiece to the Annual for 1885-6. On the base of the trophy are two figures of curlers, one wearing Highland dress symbolising the North of Scotland, and the other the South. A quaint touch is that they are standing on a plate of glass through which some sphagnum moss is showing; the whole gives a nice impression of a sheet of black ice.

The club which had 'the highest average majority of Shots per Rink' in 1935 was Monzievaird and Strowan; their opponents, Duntocher CC, having been vanquished by scores of 46 to 2 and 24 to 11. The rink skipped by Major C.H. Graham Stirling, President of Monzievaird, having won by 44 shots, were entitled to be awarded, and 'to retain', the Gold Badges. 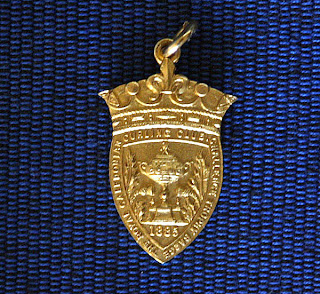 The reason for this posting is that one of these four gold badges was recently offered to and acquired by the RCCC Charitable Trust. It is of the design with which many curlers will be familiar, a crowned shield on the front of which is a representation of the Challenge Trophy. The Royal Club has also used the badge in gold and silver as a prize for at least the International Match and the RCCC Rink Championship. 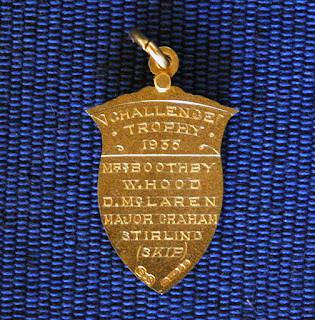 On the reverse is the following engraving:

Of these players Mrs Boothby was an occasional member of the club.

Not surprisingly, the two rinks who gained the Challenge Trophy had their photograph taken. Very surprisingly, I have discovered a copy of it in my collections and I reproduce it below. 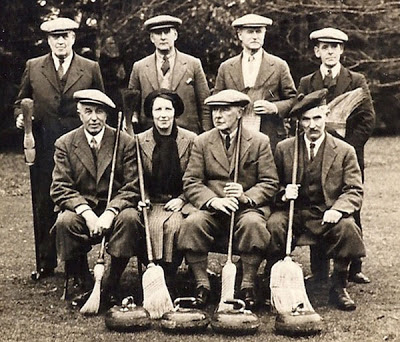 The two Monzievaird and Strowan rinks who won the Trophy; the badge-winning rink is seated in front. They are Mrs Boothby, W. Hood, D. McLaren, and Major Graham Stirling of Strowan. (From the collection of David B Smith).

Some curlers had travelled far to take their part in 'a whole nation at play'. There were two rinks from Aboyne on Deeside, and their preparation had included the making of a special teemarker. It is made of wood in the shape of a bottle, nicely painted. In addition to the names of one rink there is the legend: CARSEBRECK DEC. 24 1935. 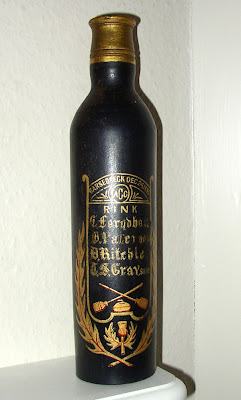 From the collection of David B Smith.

Illustrations are © of the author.
Posted by Bob Cowan at 19:14