Inspector of the Ice 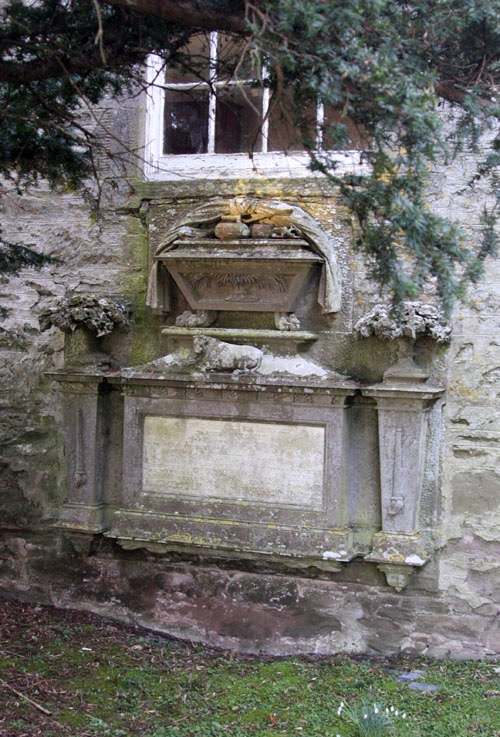 On the wall of Tibbermore Church near Perth is a monument to James Ritchie, who died in 1840. 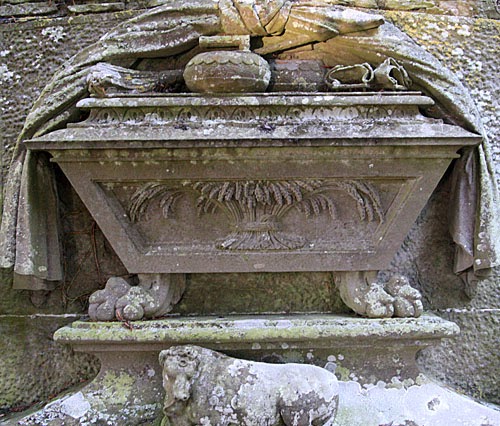 This monument is built into the west wall of the north wing of Tibbermore Church, a few miles to the west of Perth. On top of a sarcophagus are two curling stones, tramps, and a broom. John Ritchie, a local farmer, was a keen curler! His ornate headstone seems to be unique in depicting the sport of curling.

The monument also has a carving of Ritchie's prize winning bull.

Tibbermore Kirk is no longer is use, and has been in the care of the Scottish Redundant Churches Trust since 2001, see here.

See this video for views of the church and graveyard.

These are single-soled stones, with scalloped decoration above the striking band. There's a broom kowe behind. And on the right are a pair of tramps, also known as crampits, which were attached to the feet in the manner of crampons, to give secure footing, but which did much damage to the ice. David Smith discussed these in this post.

I photographed James Ritchie's memorial back in 2007, see here. Being on an outside wall, it is open to the weather. A large yew tree does give the carvings some protection, and someone is paying attention to the condition of the monument. In 2007, there was signs of damage to the rearmost of the two stones, and a crack could be seen in the scalloped decoration. This had undergone some restoration in the intervening years.

Who was James Ritchie? We know he farmed at Cairney (also spelled Cairnie on old maps), which is well to the south west of Tibbermore on the other side of the main road from Auchterarder to Perth.


The Annuals of the Grand Caledonian Curling Club (as the Royal Club was called in its early years) provide some more information. Ritchie belonged to the Cairney Curling Club which was one of twenty-eight clubs which provided returns to be printed in the first Annual, that for 1839. Here it is listed as the 'Carnie Club', with only five members' names, and no indication of who the office bearers were. The entry was more comprehensive the following year, and the spelling of the club name had changed! 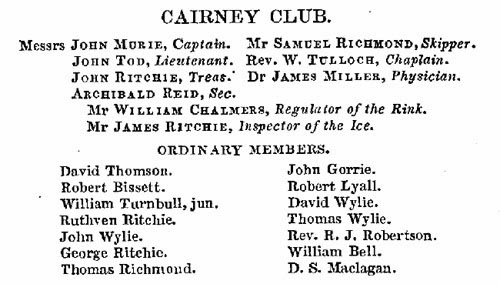 This is the club's entry in the Annual of the Grand Caledonian Curling Club for 1840. Twenty-three members are named. Rather than listing the office bearers as 'President' and 'Vice President', the Cairney Club has a 'Captain', 'Skipper, and 'Lieutenant'. I rather like the fact that the club had its own chaplain and its own doctor! I wonder what was involved in the position of 'Regulator of the Rink'.
James Ritchie was the 'Inspector of the Ice'.

The practice of designating the duties of office-bearers and members in this way was considered to be 'unnecessary' by the Annual editors, and this was pointed out in a 'Notice to Local Clubs' printed in the 1840 Annual on page 22.

As the 'Inspector of the Ice' it is likely that Ritchie's job was to monitor the ice of the local pond, and indicate when conditions were suitable for curling to take place. And that raises the question of where the members of the Cairney club did play. It is relevant to point out here that the earliest Constitution of the Grand Caledonian Curling Club, in the General Regulations section, says (3d), 'That Local Clubs to be admissible shall consist of at least eight members, have a designation, and stated sheet of ice for their operations, and be governed by office-bearers under a code of regulations'. (My emphasis) The requirement for affiliated clubs to have their own curling ice to play on remained in the Royal Club regulations until 1936, by which time most clubs were playing indoors. The Historical Curling Places website shows clubs' local ponds, as well as other venues where there is evidence that the sport was played.

The farms of Cairnie and Upper Cairnie are in Forteviot Parish. The curlers of the area, including James Ritchie, must have been well organised in the early years of the nineteenth century. According to the list of clubs in old Annuals, the Cairney Club itself was formed in 1832. Where did they play? Did they have a pond on Cairnie farmland which they called their own in 1838 when they decided to join the Grand Caledonian Club? The OS 6 inch map, Perthshire, Sheet CIX, 1st edition, surveyed in 1859 and published in 1866, shows a possible place, what seems to be a mill pond, just to the south west of Cairney Cottage. But there is no hard evidence to indicate that curling was ever played there. Present day 'curling pond hunters' have work to do!

Images © Bob Cowan, excepting that of the Cairney membership in 1840 which is from the Annual of the Grand Caledonian Curling Club of that year.
Posted by Bob Cowan at 16:24