The Mystery Woman on the Olympic Curling Rink in 1924 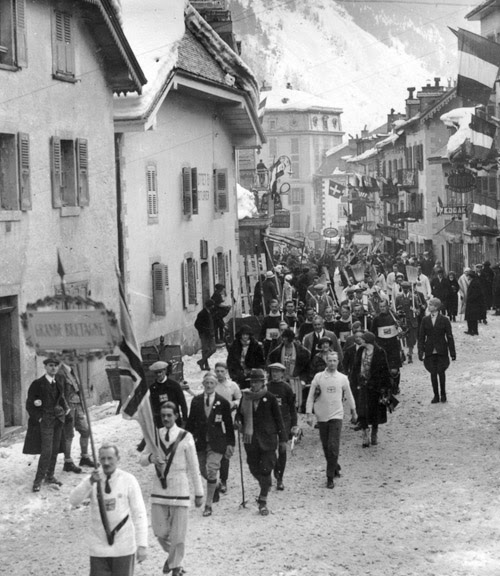 Ninety years ago, on January 25, 1924, the Great Britain team paraded through Chamonix on the first day of the the 'Semaine Internationale des Sports d'Hiver', the event that would retrospectively become the first Olympic Winter Games. That's the GB delegation in the photo above with athletes who would compete in ladies' and men's figure skating, pairs figure skating, ice hockey, bobsleigh, and curling. You can see the curlers, with corn brooms on their shoulders, in the rear of the group. There are eight of them - the Willie Jackson team, and four reserves.

I'd like to be able to identify the flagbearer.  The British Olympic Association's Official Report of the VIIIth Olympiad, compiled by F G L Fairlie, does not say, but from other photographs in that publication it would seem that two of the bobsleigh team are leading Team GB. I think that is Lieutenant W G Horton with the banner, and Lieutenant A D Crabbe with the flag, but confirmation is required.

Although the event was not called the ‘Olympic Winter Games’ at the time, it was organised under the patronage of the International Olympic Committee, and included many of the ceremonial aspects of the Olympic Games. In the parade on January 25, the teams were headed for the main ice arena, the Stade du Mont Blanc, where Camille Mandrillon took the Olympic Oath on behalf of the athletes, see here.

As I write this I'm looking forward to watching the Opening Ceremonies of the Games in Sochi. I imagine these will be quite different than ninety years ago! Read more about the first opening ceremony here, and watch a short video of the parade here. Spot the GB curlers walking past!

I have previously written in detail about the1924 curling competition, see here, this being won by a British team, four Scots - Willie Jackson (skip), Robin Welsh (3rd), Tom Murray (2nd) and Laurence Jackson (lead). The curling rink was to the side of the of the main arena, see below. 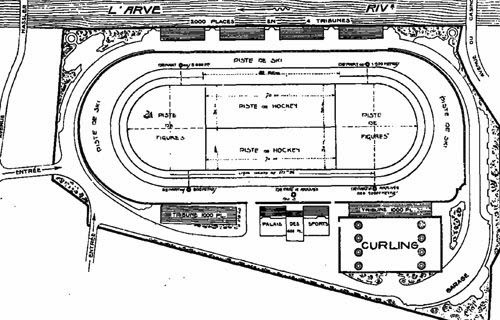 Just what did the curling rink look like? I have included shots of the action in previous posts, but these don't give a good impression of the rink and the surroundings. I recently acquired an original photograph from the time. This is a similar photo to that in the Spaarnestad collection in the Netherlands National Archives (here) which is dated January 27, the day before the first official match. 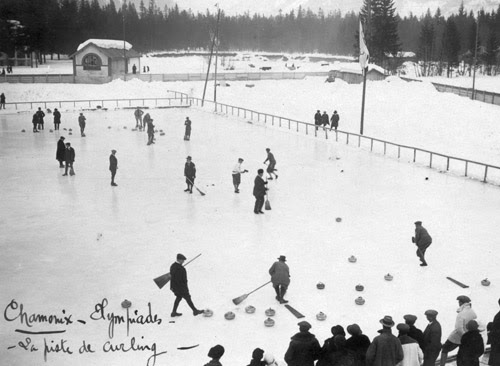 The photograph shows two games being played on 'La piste de curling'. It is possible to identify some of the players on the ice. I'm fairly sure that on the far sheet that's the GB team in action, with Laurence Jackson and Tom Murray ready to sweep a stone that has been played by their skip. They are playing against some of the Swedish curlers.

I do not believe that this was one of the medal matches. If the date of the photo in the Netherlands National Archives is correct, I thought it must be a practice session. The first official match of the curling competition was held on the morning of Monday, January 28, 1924. Sweden beat France, 18-10. The following day, Tuesday, January 29, 1924, Great Britain played Sweden and won 38-7. On Wednesday, January 30, 1924, GB played France, winning 46-4. And that was the competition over.

I speculated before, see here, that there could have been friendly games, after the main matches. Now there is evidence that the curling rink was put to good use before the main games took place. 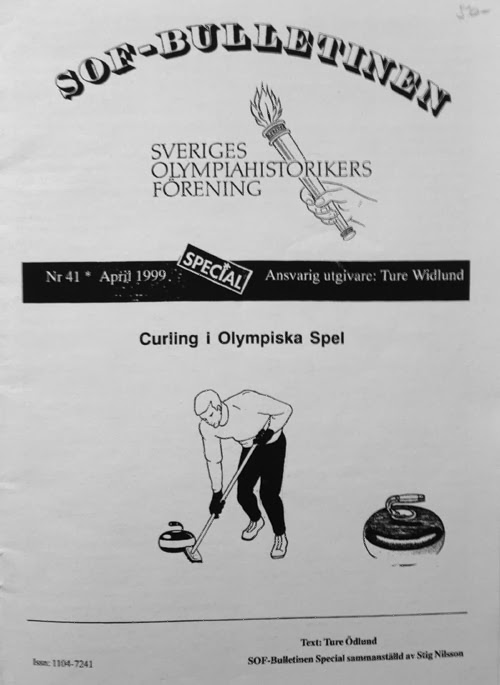 The evidence came in emails from Lars Ingels, who describes himself as a 'Swedish Olympic amateur historian'. He pointed me towards an article in the April 1999 SOF-bulletinen, the magazine of the Swedish Olympic Historians Association. It is a first hand account written by Ture Odlund, one of the members of the Swedish squad, recounting how they travelled to the games, and details of the medal games. Odlund played third in the team that was to lose the medal game against the Jackson side. I am indebted to Lars for bringing this article to my attention.

When the draw for the curling competition was made, a Swiss team was expected to take part, and the first games were to take place on Saturday, January 26. But the Swiss withdrew. A new draw was made and the competition proper began on the Monday, January 28. That meant that there were two free days between the opening parade and the first medal game. Ture Odlund indicates that in these days the Swedes and the Scots played three 'friendly' games, and the Swedes played a further two games against France! The teams would have got to know each other well before the medal games took place. 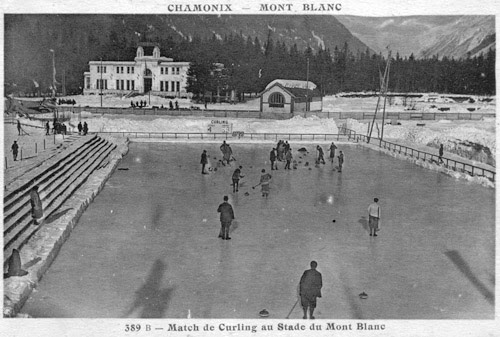 I recently obtained this postcard which is titled 'Match de Curling au Stade du Mont Blanc'. I wondered if the photo had been taken around the time of the Olympic curling competition. It was only when I was able to study it with a magnifying glass that I found that it was. The clue is on the snow lying on the roof of the small building in the rear of the view. The depth of the snow, and the way that it has broken off, is identical to that in the photo of 'La piste de Curling', posted above! It must have been taken around the same time, January 27. 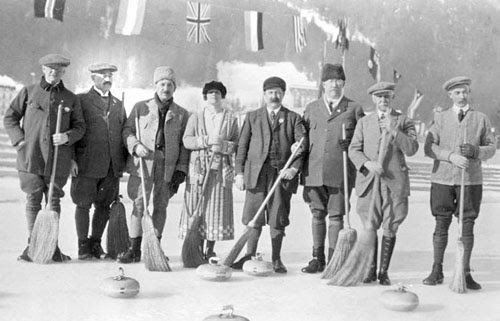 I've commented on this photo before, see here. It's from the IOC's archive of photos from 1924 (here). It is captioned thus, 'Chamonix 1924 - During the events. The Swedish team (SWE) and the team of Great Britain (GBR)'. This caption is quite wrong! None of the GB gold medal winning foursome are in the photo. And who is the mystery woman fourth from the left? Three of the British reserves are in the group. William Brown is on the right, next to Colonel Robertson-Aikman. Third from the right is Swedish skip, Johan Petter Ahlen and next to him is John McLeod. The other three of Ahlen's team, Kronlund, Wahlberg, and Pettersson, are on the left of the photo. So, four Swedish players, three GB reserves, and a woman. Who is she? 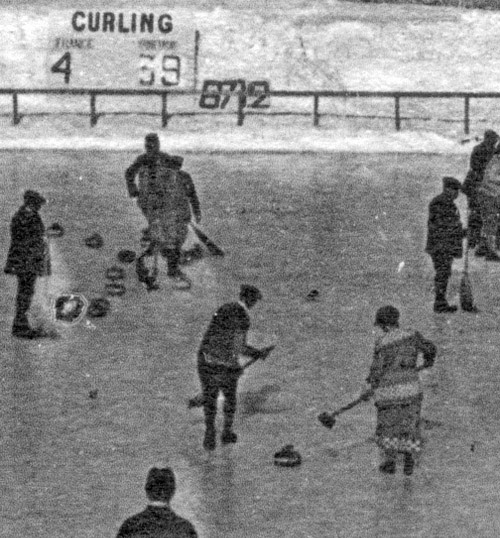 Looking at the detail of the Chamonix postcard, it's the same group of curlers on the ice that are in the IOC photograph, and on the right of this closeup, there's the mystery woman involved in the game. She's ready to sweep with Willie Bown, and that's Colonel Robertson-Aikman in the head. She's playing here with three Brits, but was she herself British? Or could she have been Swedish?

There's just another puzzle in this photo. The scoreboard at the back seems to read France 4 Britain 39. It doesn't apply to the game being played, but could, perhaps, be a left over from the medal game on the morning of Tuesday, January 29, when GB beat France 46-4, with the last end or two still to be added. If this is indeed the case, then these games are being played after the medal matches have all been completed. And that would make sense. 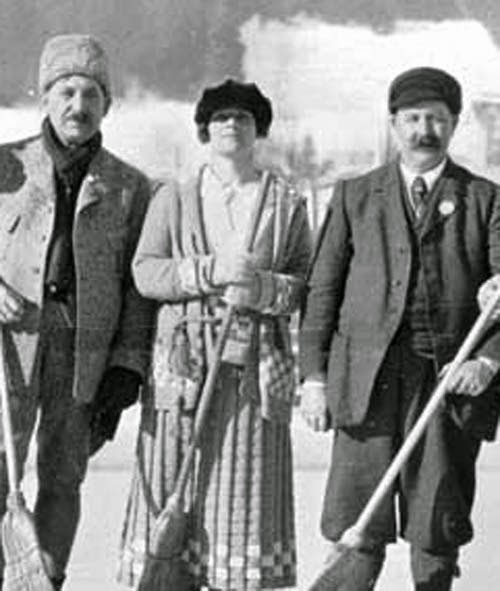 Can you identify the mystery woman? Here's a closeup from the group photo.

It would not be until 1988 that women curlers stepped on to Olympic ice officially, when curling was a demonstration sport in Calgary. No GB team though. See who played then, here.

There's one other image which I've come across recently. 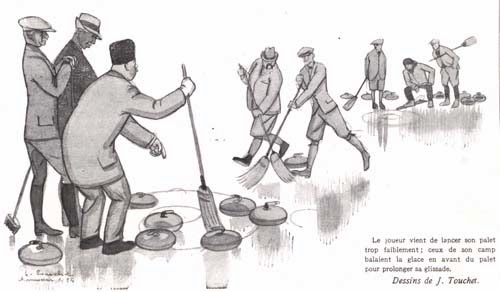 This is from a French publication, L'Illustration, from February 9, 1924. It is captioned 'Une partie de curling entre equipes anglaise et suedoise'. The insert words, bottom right, can be translated as, "The player has just launched his stone too slow and those in his team sweep the ice in front of the stone to extend its slide." Several players in the cartoon can be easily identified. That's certainly Sweden's skip, Johan Petter Ahlen, calling the shot in the head. But it is two of the British squad (identifiable by their plus-fours) that are doing the sweeping. I would guess that's supposed to be Tom Murray on the right, and either Robin Welsh or John McLeod on the left. I suppose that the illustrator has used artistic license in his composition intended to describe an aspect of the game, but it would be nice to think that the Swedes and the Brits did mix up their teams for a friendly game at some point in Chamonix all these years ago!

Thanks to Lars Ingels for help with this article. The top photo is from a scrapbook now in the care of Tom Murray's great grandaughter. The origins of the other images are as indicated.
Posted by Bob Cowan at 10:42