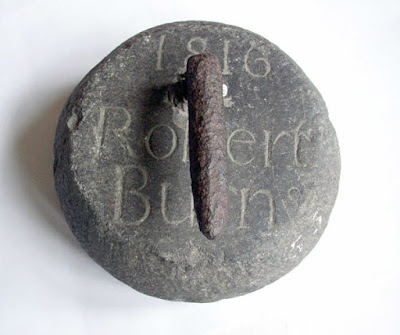 Robert Burns was born on January 25, 1759. This may have been his curling stone ... but probably not. It certainly dates from the eighteenth century, but the date carved into the stone does not make much sense. Burns died in 1796. However, the Bard would have played with a stone like this one, single-soled, roughly shaped, with an iron handle. The stone in the photograph remains something of an enigma.

Yes, Burns WAS a curler, despite what it might say in older books, and some respected websites that have not been updated.

It had long been suspected that Burns played the game. His works include two mentions. Firstly, the opening lines of The Vision read:

The sun had clos’d the winter day,
The Curlers quat their roaring play…

Then, in Tam Samson’s Elegy, the poet shows that he knew the game well, when he writes:

When Winter muffles up his cloak,
And binds the mire like a rock;
When to the loughs the curlers flock,
Wi' gleesome speed,
Wha will they station at the cock?
Tam Samson's dead!

He was the king o' a' the core,
To guard, or draw, or wick a bore,
Or up the rink like Jehu roar,
In time o' need;
But now he lags on Death's hog-score,
Tam Samson's dead!

The evidence that Burns had played curling was brought to the public's attention in April 2006, when David Smith wrote an article for the Scottish Curler magazine entitled, 'The Evidence that the Bard was a Curler'. Later that year the story was retold in the Burns Chronicle of Autumn 2006 (a publication of the Robert Burns World Federation, see here). And we put the information online in July 2008, here, one of the early stories in that first year of the Curling History Blog.

The evidence that Burns curled comes from the Burns Chronicle of 1934 which included letters between two friends of Burns, John Syme and Alexander Cunningham. In a letter dated from Barcailzie, Kirkcudbrightshire, dated January 5, 1789, Syme writes, "I have been once or twice in company with Burns, and admire him much…   I missed a meeting with him last Friday at Dumfries, where he played a Bonespeel with the Curlers there, and enlivened their Beef and Kail and Tody till the small hours of Saturday morning. I was engaged in that Bonespeel, but an unlooked for occurrence called me out of Town, to my great mortification…"

So, Robbie Burns had played in a curling bonespeel (bonspiel) early in the year 1789.

January 5, 1789, was a Monday, so if Syme's reference to 'last Friday' refers to that day in the previous week, the bonspiel in Dumfries must have been held on January 2, 1789. At that time Burns was living at Ellisland Farm, some six miles to the north west of Dumfries (see here). But I wonder where the bonspiel took place?

The Vision was completed in 1785, and Tam Samson's Elegy in 1786. Both these poems then were written before Burns had been seen curling. It is not too big an assumption that he had been a curler long before 1789.

Read more about Tam Samson's Elegy here, and listen to it being read by Eileen McCallum. There's more about The Vision here.


Ours is a game for Duke or Lord
Lairds, tenants, kinds and a’ that
Oor Pastors too, wha’ preach the word
Whiles ply the broom for a’ that.

The village of Beith in Ayrshire had three curling clubs in the middle of the nineteenth century. One of these was the 'Beith Robert Burns Curling Club', formed in 1855 and admitted to the Royal Club the following year. It would be interesting to know why this group of curlers chose to name their club after the Bard. By 1866 they had a patron, John Fullarton Patrick of Grangehill, and played on a pond on his estate. A list of the club's members appears in each Annual until that of 1884-85, when it seems the club folded. I wonder why. However, in 1890, a new club called the 'Beith Rabbie Burns Curling Club' was established, with some of the same members. At this time Beith had four curling clubs! The Rabbie Burns club continued to be listed in the Annuals up to 1913, although the name reverted back to the 'Beith Robert Burns Curling Club' in 1901. Like many of Scotland's curling clubs it did not survive the Great War.

Today many groups of curlers throughout the world celebrate Burns' birthday. The Ayr Curling Club, which acts as an umbrella club for the more than 50 clubs which use the Ayr rink in Scotland, traditionally holds a Burns Supper. Go here to see photos of the 2014 event at which David Smith addressed the haggis. 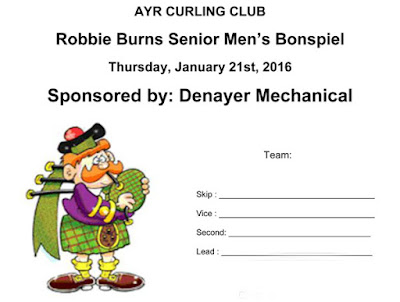 This was the sign-up sheet! I trust that the event went off successfully and that all involved had a great time. 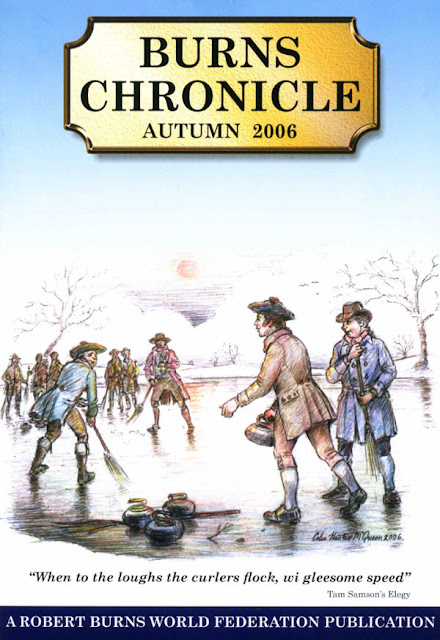 Above: The publishers of the Burns Chronicle commissioned from Colin Hunter McQueen, a cover illustration celebrating the sport, for the Autumn 2006 issue.

Top image is of a stone in the David B Smith collection, now in the care of the Scottish Curling Trust.
Posted by Bob Cowan at 09:10

Fantastic Bob, you make it so interesting.