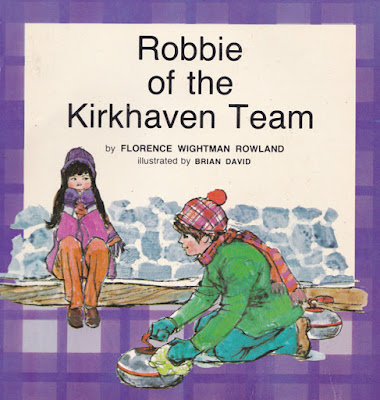 I have this little book in my curling library. 'Robbie of the Kirkhaven Team' was written by Florence Wightman Rowland, and illustrated by Brian David. It was published in 1973 by Ginn and Company and is a primary school book - Magic Circle Books Reading 360 series, Level 9, Unit 2 - written in a way to appeal to, say, an eight year old.

It looks as if my copy originated from the O'Hara Catholic School in Eugene Oregon, and came to Scotland by way of a bookshop in Reno, Nevada. 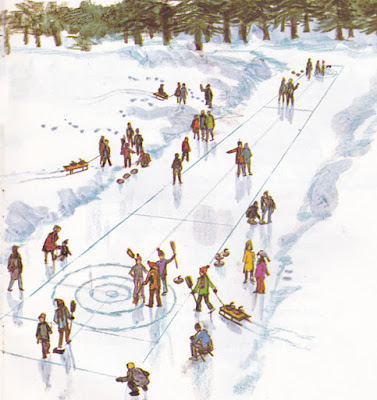 "Snow had fallen in the Scottish Highlands during the night. As soon as he awoke, Robbie jumped out of bed and ran to the window to look out. The moors and hills in the distance were white with snow. Above them, the sky was the color of a bluebell - not a cloud in sight. Robbie grinned. What a perfect day for a curling game!"

So reads the first paragraph. Did I say it was a fictional story?

Nine year old Robbie tells his Canadian cousin Katy, 7, all about curling, and he goes off to compete in a match on outside ice against a team from 'Glencove'. 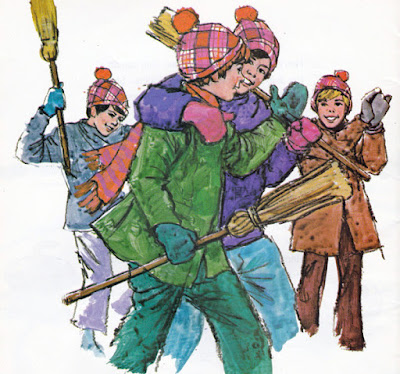 The story has a happy ending! 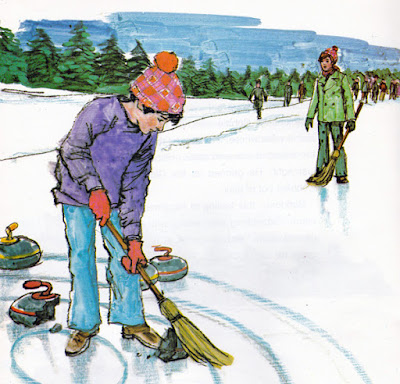 Spoiler Alert! An important twist in the story involves the breakage of a curling stone, as pictured above by Brian David, whose illustrations make this little book such a treasure.

That got me thinking. How old is the rule which governs a stone breaking during play? 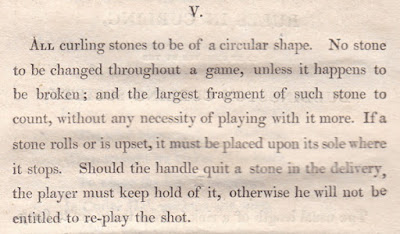 The above is from 'An Account of the Game of Curling', published in 1811. This book contains the first printed reference to curling's rules, as practised at the time by the Duddingston Curling Society of Edinburgh. There are only twelve rules written down, and these had 'received the approbation and sanction' of the club at a meeting on January 6, 1804. The second sentence of Rule 5 illustrates what should be done if a stone broke. If, after breakage, parts of the stone were still 'in play', then the 'largest fragment' should count when it came to assessing the score at the end of the end. And another stone could be used thereafter.

The inclusion of the rule, in the earliest printed set of rules, does suggest that breakage was not uncommon. How often did the rule have to be invoked, I wonder?

Of course, the stones being played with at the beginning of the nineteenth century, were not of Ailsa or Trefor granite, but were mostly of whinstone, that term used to describe any hard dark-coloured rock commonly found in many places in Scotland.

When the Grand Caledonian Curling Club was formed in 1838, it adopted the Duddingston rules. The first Annual for 1838-39 has this as Rule 9, "All Curling Stones shall be of a circular shape. No stone must be changed throughout the game, unless it happen to be broken, and then the largest fragment to count, without any necessity of playing with it more. If a stone rolls and stops upon its side or top, it shall not be counted, but put off the ice. Should the handle quit the stone in the delivery, the player must keep hold of it, otherwise he will not be entitled to replay the shot."

Although the wording is just a little different, the sense is the same.

There was a minor change from 1854, "No stone, or side of a stone, shall be changed after a game has been begun, nor during its continuance, unless it happen to be broken, and then the largest fragment to count, without any necessity for playing with it more."

Twenty years later, in 1874, the Constitution of the Royal Club and the Rules of Play underwent a considerable revision. The occurrence of a stone breaking now had its own separate entry in the Rules, "Should a Stone happen to be broken, the largest fragment shall be considered in the Game for that end — the player being entitled to use another Stone, or another pair, during the remainder of the Game."

The sense of this rule, and the reference to the 'largest fragment', has continued right up to the present day. For the 2015-16 season, the rules can be found on the Royal Club website here, and you can read at R2 (c), "If a stone is broken in play a replacement stone shall be placed where the largest fragment came to rest. The end in play, and the game, shall be completed using the replacement stone."

Curling Canada's Rules of Curling for General Play 2014-18 (see here) contain, "4. (4) If a stone is broken in play, a replacement stone shall be placed where the largest  fragment comes to rest. The inside edge of the replacement stone shall be placed in the same position as the inside edge of the largest fragment with the assistance of a measuring stick."

For many years, the World Curling Federation had a similarly worded rule in place should a stone break during an international event.

But fragments are no more! The World Federation now eschews any mention of 'fragments'! The most recent WCF Rules of Curling can be found here. WCF rule R2 (c) reads, "If a stone is broken in play, the teams use the 'Spirit of Curling' to decide where the stone(s) should be placed. If agreement cannot be reached, the end will be replayed." This wording can also be found in the Rules of Curling: Club and Bonspiel Use, from the USA Curling website here. 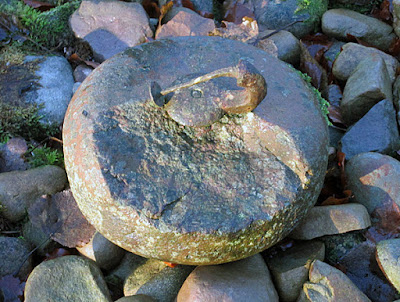 This double soled stone will be at least 100 years old, and remarkably still has the remains of a handle. Broken stones like this may find a use as garden 'ornaments', as above. 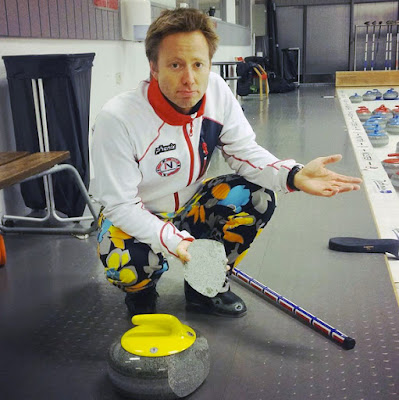 No-one likes to see modern curling stones in pieces, least of all the manufacturer. But breakages do occasionally happen. Norway's Torger Nergard with a big and a small 'fragment'! 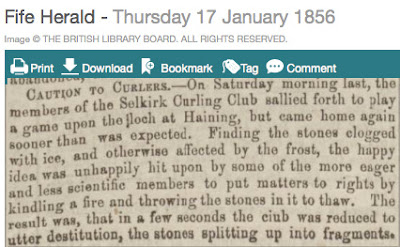 But the biggest danger to curling stones is heat! The Fife Herald in 1856 ran a story about an expensive lesson learned by Selkirk CC members back in 1856. Don't put your stones on the fire. 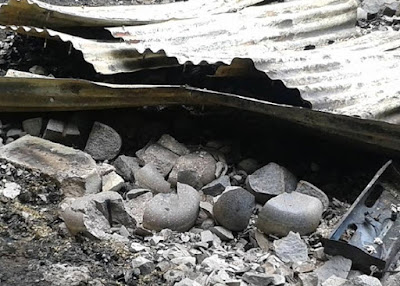 Sadly, vandalism has been the ruin of many stones. I know of two examples where a club's curling hut has been set ablaze, with the stones (and other contents) destroyed as a consequence. The photo above is the aftermath of vandalism at the Vale of Alford CC's curling house last year. It really is sad to see. The good news is that there is every hope that the house will be rebuilt, see here. 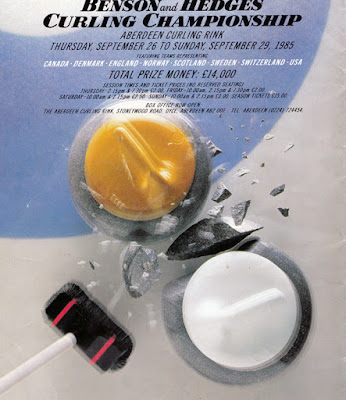 No discussion of breaking stones would be complete without mention of this advert for the Benson and Hedges Championship at Aberdeen in 1985. 'Exploding rocks' was certainly a novel idea for a promotional image. Back in 1985, pre-Photoshop, it would not have been easy to create such an image. I wonder how it was done.

Happy New Year, and may all your stones remain intact!

Robbie and the Kirkhaven Team photos are scans from the original book. The Duddingston rule is a scan from an original copy of 'An Account of the Game of Curling'.

The Fife Herald clipping is reproduced with kind permission of The British Newspaper Archive. The image is © The British Library Board. All Rights Reserved.

The Vale of Alford's photo is from the club's Facebook page here. The Benson and Hedges advert is from the author's archive. Other photos are © the author.