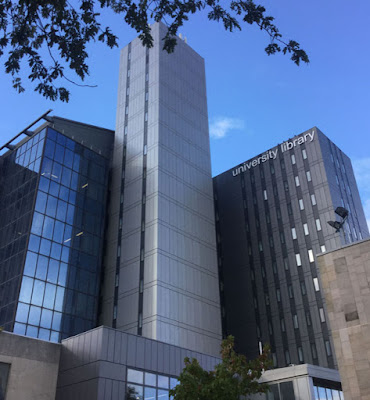 My curling history research has taken me to many interesting places in the past year - sites of old curling ponds, curling huts, museums, art galleries, archive centres and libraries. It was a pleasure recently to return to my alma mater, and the library of the University of Glasgow, where I spent much time in the 1960s and 1970s. The University's Special Collections are housed in the top floor of the building. Of particular curling interest are copies of 'The Muses Threnodie', see here. What caught my eye in the Special Collections catalogue, when searching for 'curling', was 'Rules and regulations of the Jedburgh Curling Club, adopted at a general meeting held by them January 25, 1838'.

These few pages from 1838, printed by W Easton, are bound together with other items. Initially I did not see them as unusual, but then I came to Rule XIII: 'Each player to come furnished with two stones, crampets and a besom.'

Bringing one's own stones and a besom (broom) to play with is easy to understand. But 'crampets'? Confusion arises as this term nowadays refers to the flat metal sheets that supply a foothold on outside ice, see here for a picture. It makes no sense that Jedburgh members would all have been required to bring such crampets to the ice. The explanation is that 'crampet' has an earlier meaning. In the late 18th and early 19th centuries, crampets were spikes that were attached to your boots or shoes to give a grip on the ice. Think of them as curling's 'crampons'!

The earliest reference to crampets that I can find is in the Caledonian Mercury of Saturday, February 8, 1772, when a curling party's curling stones and 'crampits' were lost when the ice they were playing on was washed away.

Another early reference, from 1773, calls them 'cramp-bits'. This is in a poem by James Graeme which can be found online here. Here's part of it:

The goals are marked out; the centre each
Of a large random circle; distance scores
Are drawn between, the dread of weakly arms.
Firm on his cramp-bits stands the steady youth,
Who leads the game: Low o'er the weighty stone
He bends incumbent, and with nicest eye
Surveys the further goal, and in his mind
Measures the distance; careful to bestow
Just force enough: then, balanc'd in his hand,
He flings it on direct; it glides along
Hoarse murmuring, while, plying hard before,
Fail many a besom sweeps away the snow,
Or icicle, that might obstruct its course.

To add to the confusion on names, crampets were also referred to as 'tramps'. 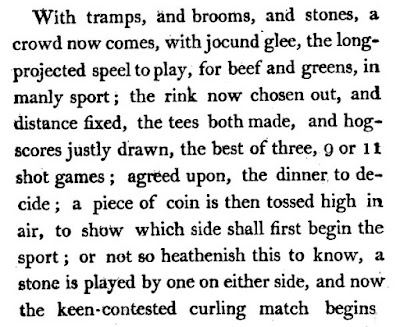 This description of curling is from The Winter Season by James Fisher, written in 1810. This is available as a free ebook, here. On the page where the above appears, the author has added a footnote. This says, "For the information of our southern neighbours who may not be acquainted with the game of curling, so much practised in many parts of Scotland, it may not be amiss to observe, that the tramps are made of iron to go upon the feet, something after the form of stirrup irons, with sharp prominences at the bottom to prevent the curler from sliding while engaged in play."

We can find another description of what crampets were like in The Era, of Sunday March 1, 1840, within an article about curling. "The players formerly used to wear crampits, to enable them to stand steadily when they threw their stones: these were flat pieces of iron, with four spikes below, bound to the sole of the shoe with a strap and buckle."

Note that this article says 'formerly used to wear'.  By 1838, when the Jedburgh CC printed their rules, crampets were no longer in use in other parts of the country.

In An Account of the Game of Curling, published in 1811, John Ramsay writes that, at Duddingston, "The use of crampits is now very much laid aside."

In 1830, in Memorabilia Curliana Mabenensia, Richard Brown writes, "Curling, where it is considered to be practised upon improved principles, has laid aside the use of tramps." But Brown goes on to defend their use in certain circumstances, and it can be assumed from this that they were still in use by members of the Lochmaben Curling Society at that time. Indeed, Lynne Longmore's Minutes of Note, see here, based on the earliest minutes of the Lochmaben Curling Society, has an appendix with that club's rules at November, 1829. These include, "Every player, to come furnished with crampets and a besom, must be ready to play when his turn comes; nor take more than a reasonable time to throw his stone."

At Largs, things were different, and the use of crampets was not countenanced. Indeed, John Cairnie is disparaging of their use elsewhere in the country, writing in his Essay on Curling and Artificial Pond Making, published in 1833, "We are sorry to say, that the almost barbarous custom of wearing crampets on the feet, in many places is still continued."

Jedburgh, apparently, was one such place maintaining the 'barbarous custom'! 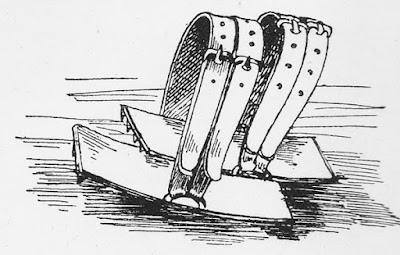 This sketch is from the Rev John Kerr's History of Curling, from 1890.

Kerr also refers to the painting, 'The Curlers', by Sir George Harvey, from 1835, where many of the players are wearing crampets. This painting is currently on display in the 'Playing for Scotland: The Making of Modern Sport' exhibition at the Scottish National Portrait Gallery in Edinburgh. Until recently you had to travel in person to Edinburgh to get close up to the painting. And I would encourage you still to do so, if you can!

However, the National Galleries' new website allows you to zoom into the painting online, and Harvey's detail leaps out from your computer screen, phone, or tablet, see here. 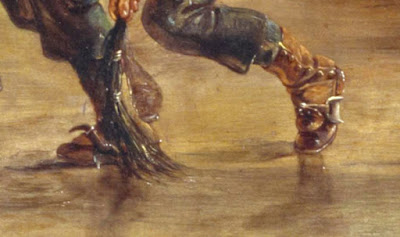 Here, the crampets are attached to the player's shoes and galoshes with straps. 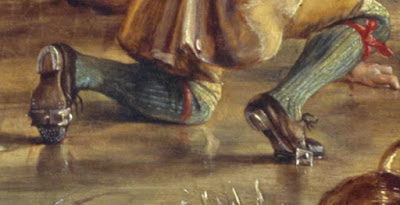 Here, the crampets appear to be attached with some sort of screw fitting, over well nailed shoes.

Do examine the painting for yourself, here, and see what the other players are wearing on their feet! 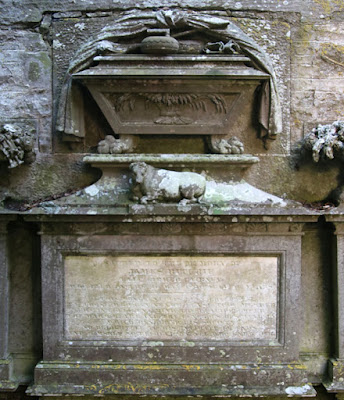 Another way to see what crampets were like, is to head to Tibbermore, near Perth, to look at this memorial on the church wall. 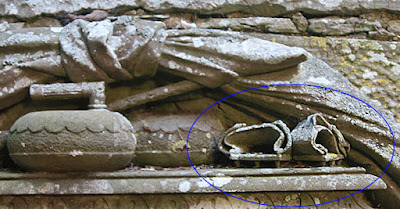 James Ritchie was a keen curler, see here. He died in 1840 and his memorial includes two decorated stones, a broom, and a pair of crampets, all carved in stone. One hundred and seventy-six years on, the monument may be a little weathered, but, remarkably, the spikes on the bottom of the crampets can still be seen. 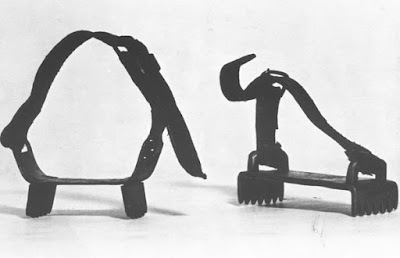 Considering how common crampets must have been, few examples have survived. Indeed, I do not know of any museum or private collection which contains examples. If you know where any are preserved, please let me know. The image above is of a pair which at one point belonged to David Smith, but latterly were missing, having been lent for display abroad. They are described in his 'Curling: an illustrated history' as having originally come from Lochmaben.

This article began with the observation that Jedburgh curlers in 1838 were required to appear on the ice with their own crampets. That year saw the formation of the Grand Caledonian Curling Club, and the first rules of that body did not include such a requirement. Indeed, a completely different way of establishing a secure stance on the ice while delivering a stone was recommended - more about which in a future article. Jedburgh Curling Club was admitted to the Royal Caledonian Curling Club in 1845, and we can assume that their requirement that every member had to take to the ice with crampets had, by then, been laid aside.

Crampets caused considerable damage to the ice. It is hard now to imagine how you could sweep whilst wearing such things. But of course, the early regulations for play only allowed sweeping from the far hog towards the tee - and so the players would line up on either side of the ice and ply just a couple of strokes as the stones passed, without moving their feet!

Crampets had advantages when throwing your stone. If there were guards in play, you could easily just move to the side, to get a better view of the target. That this was considered to be cheating, and to be discouraged, can be seen by the inclusion in the first rules of the Grand Caledonian Curling Club in 1838, "Each player to place his feet in such a manner as that, in delivering his stone, he shall bring it over the tee. A player stepping aside to take a brittle (or wick), or other shot, shall forfeit his stone for that end."

More about other forms of curling footwear, as well as foot-boards, foot irons, trickers and hacks, will be the subject of a future article!

The image of 'The Curlers' is © National Galleries of Scotland. The details are screenshots from the zoomed image on the website, here. Other photos are by Bob. Images have been scanned from books in Bob's library. Thanks go to the helpful staff at the University of Glasgow library, and to Imogen Gibbon, at the Scottish National Portrait Gallery, for discussions about 'The Curlers'.
Posted by Bob Cowan at 13:27