The Women Curlers of Buxton 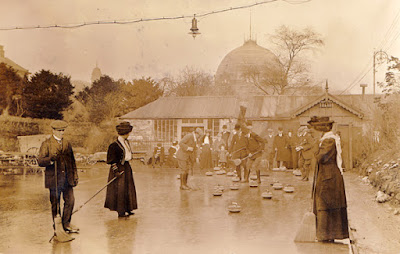 Since starting to write about curling's women pioneers at the end of the nineteenth and the beginning of the twentieth centuries, see here, here and here. I've been on the lookout for photographic evidence of when 'mixed' or 'open' curling became accepted. When did men and women begin to play together on curling rinks?

Such evidence can be found in the image above. There's a game in progress, with both men and women involved in the play. The venue? The rink is in the Pavilion Gardens in the Derbyshire town of Buxton, ENGLAND! Dating old photographs can be difficult, but when real photos have been printed as postcards, and these have been mailed, the postmark is helpful. The postcard from which the above image has been scanned was sent in April 1909, and so the action therein must date from before that date.

The photographer who took this image was Robert Forgie Hunter, who would have been twenty-seven or twenty-eight years old. Read about his life here, and here.

The Buxton Curling Club was formed in 1890 and became affiliated to the Royal Caledonian Curling Club in 1904. The club's first pond was in the policies of Wye House, the residence of their 'patron' FK Dickson. In the years that followed the Buxton Curling Club had two other deep-water ponds, before moving home in 1906 to the shallow-water, Cairnie-style pond shown in the image above.

The Royal Caledonian Curling Club Annual for 1907-08 describes it in glowing terms, "The pond is the property of the Buxton Gardens Company, and is probably the highest pond in Great Britain, being situated in the lovely and famous Pavilion Gardens, 1029 feet above sea-level. Certainly if it is surpassed by any other pond in altitude, which is not probable, it can be surpassed by none in the beauty and charm of its surroundings, for it lies amidst twenty acres of gardens which are intersected by the windings of the Derbyshire Wye, whose source is within half a mile of the pond; while all round the gardens themselves lie the hills of The Peak, reaching in places the height of 2000 feet above sea-level.

The pond itself is lit by electricity, and will accommodate three rinks at present, an increase of two more rinks being in contemplation. The Gardens Company built it themselves, employing none but their own men, under the supervision of their curator, Mr George Taylor, late curator of Princes Street Gardens, Edinburgh, and a member of the club. It has been built on the same principle as have those of the Braids and Watsonian Clubs; and Mr Taylor received much information from the Watsonian Club, from Col Peter Forrest of Haremyres (Braids Club), and from WJ Ewart of the Edinburgh Northern Club. The pond has this winter given entire satisfaction."

At September 15, 1907, the club had 84 regular members. Buxton was one of 38 English curling clubs at that time, all affiliated to the Royal Caledonian Curling Club, within the First English Province. (A separate English Curling Association was formed in 1971.)

Mrs Dickson was the wife of the club's patron, and was the sole woman in the club's roster in 1906 before the move to the new pond in the Pavilion Gardens.

At September 15, 1908, a Mrs JH Harrison and a Miss Cookson can be found amongst the 'occasional members'.

I have listed these eight women as some of them are undoubtedly those who appear in the top photo, and that above, taken on the same occasion. It is again from a postcard, sent on December 31, 1909. 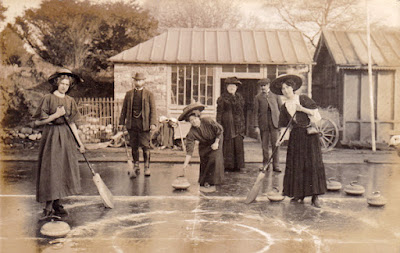 Here is a third, very clear image from a postcard sent on April 17, 1909, so dating before that time. It is not credited to Robert Hunter, so perhaps the curling women at Buxton caught the eye of other local photographers. The photo has been posed, and the circles recently scraped, perhaps prior to the beginning of a game.

Might it just be possible that someone can identify these women curlers? Of course, visitors to Buxton could become temporary members of the curling club for short periods, but I believe that those in the three photographs above are most likely to have been those listed in the club's returns in the Royal Club Annuals. As we know when the Pavilion Gardens pond was in use, and when the postcards were mailed, the photographs of the women curlers must have been taken in the winters of 1906-07, 1907-08, or 1908-09. 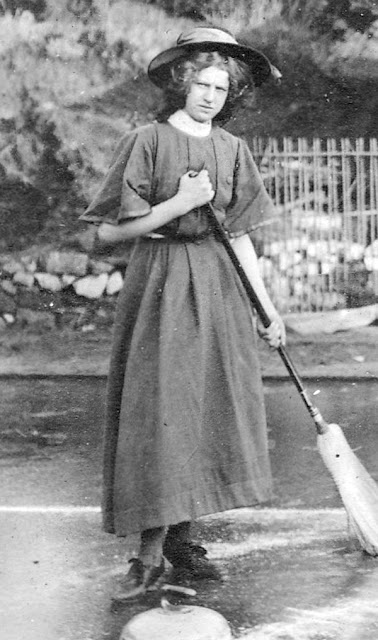 Here's an enhanced zoomed image of one of the players. Who is this woman?

Do the photographs tell us anything about the sport back then? The brooms are significant. One woman is holding her broom in an underhand grip, the other in an overhand grip. 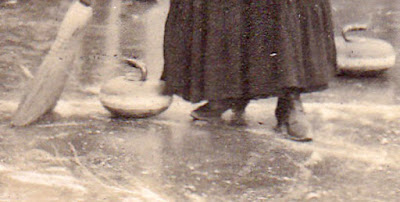 And here's a closeup of the boots being worn by the woman on the right of the picture. I wonder what grip these gave on the ice!

There are two more curling photographs in the Annual for 1907-08, showing play on the Pavilion Gardens pond, and captioned as having been taken on Boxing Day 1906. One is credited to 'Hunter, Buxton'. It is not too clear, but it does look as if there is at least one woman playing with the men in one of these photographs.

More on early women's curling in a future article.

The top photo is a postcard by 'RF Hunter Photographer, 4 Station Approach, Buxton, Derbyshire'. The middle photo is annotated, 'Hunter Series 19. Copyright. Publishers WH Smith and Son and RF Hunter, Photo Specialist, Buxton'. The curling image is one of three winter activities shown in the postcard. The other photos are of cross country skiing and sledging. The bottom photo is also from a postcard but has no photographer credit.

ADDED LATER (July 2019): Here is another image of two women curlers on the Pavilion Gardens rink at Buxton which appeared in the Illustrated Sporting and Dramatic News of Saturday, February 13, 1909, found thanks to the British Newspaper Archive. Unfortunately the ladies are not named. Again, their footware, seen clearly on the curler on the left, is a far cry for that of today! 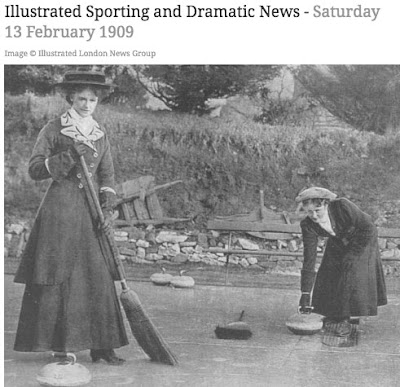 The photo is simply captioned, "Ladies curling at Buxton during the recent frost on the shallow pond in the Buxton gardens."
Posted by Bob Cowan at 16:57