'Soop it up!' : The Story of a Christmas Postcard 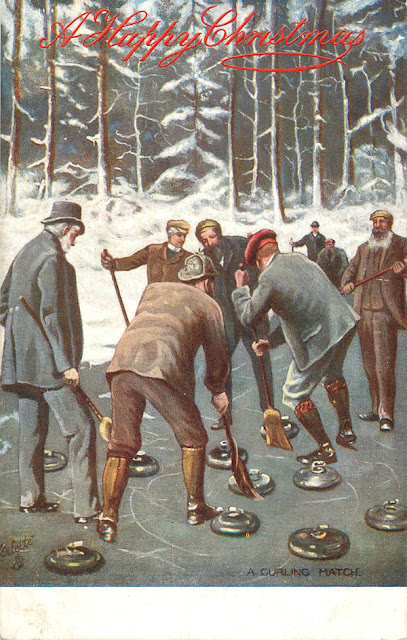 Yes, it's a Christmas greeting on an old postcard which depicts a curling scene.

I enjoy collecting postcards which show our sport of curling - I suspect that makes me a 'curling deltiologist' - and I know I'm not the only one! I've written about my hobby before, see here.

Sending postcards was most popular in the early years of the twentieth century, and lots of cards survive from that era. Collecting postcards is a hobby that appeals to many, for all sorts of reasons, see here. 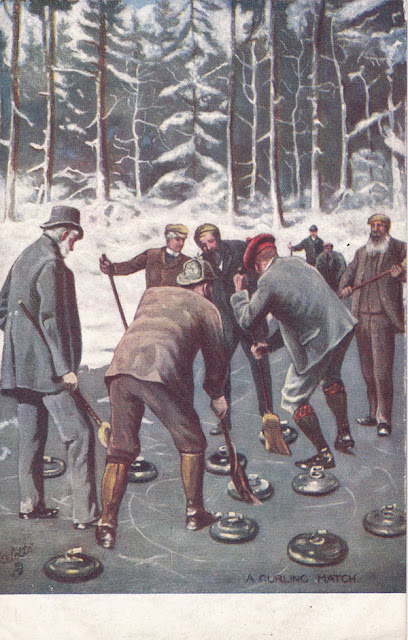 I have the same curling postcard, without the 'A Happy Christmas' greeting. 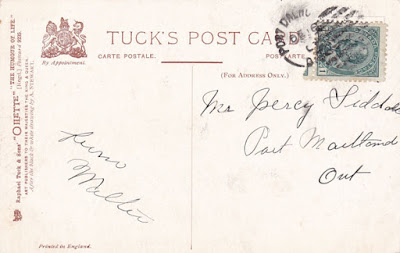 The postcard is a Raphael Tuck and Sons 'Oilette'. 'Oilettes' were a type of card produced by Tuck from around 1903, with a facsimile of an artist's work. The history of the Tuck company is here.

The curling card is one of six in series number 9235, 'The Humour of Life'. The other cards in this series are 'A Member of the Goose Club', 'Hurrah! For the Holidays', 'Misfortunes Never Come Singly', 'The Hamper He Got', and 'The Wrong Hamper'. The set was printed in England, and sold in Britain and the USA. The reverse of my card above has a Canada stamp, and was sent within that country, so perhaps it was also sold in Canada. The postmark is smudged, and I cannot decipher when it was sent. Apparently this card set was being used in December 1906, see here.

The back of the card has this note, 'After the black and white drawing by A. Stewart'. 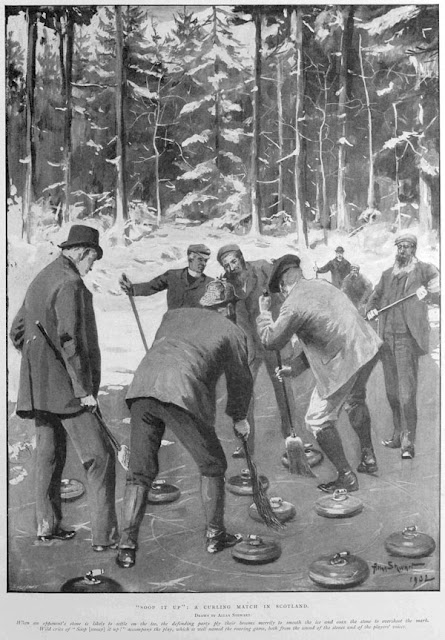 The 'A. Stewart' is the Scottish artist Allan Stewart (1865–1951), well known for his military paintings. The original on which the Tuck postcard is based can be found in the Illustrated London News of Saturday, January 10, 1903, where it is captioned "Soop it up! A Curling Match in Scotland. Drawn by Allan Stewart. When an opponent's stone is likely to settle on the tee, the defending party ply their brooms merrily to smooth the ice and coax the stone to overshoot the mark. Wild cries of "Soop (sweep) it up!" accompany the play, which is well named the roaring game, both from the sound of the stones and of the players' voices."

This explanation seems to show how little the person who wrote the caption knew about the sport. It would indeed make for an interesting game if the opposition was allowed to sweep in front of the tee and coax your stone to travel too far!

However, the caption doesn't detract from Stewart's lively depiction of the game. Tuck's Oilette is a close reproduction of the original, although Allan Stewart's signature has been removed. The original is a black and white drawing, and the colour has been added for the postcard.

The illustration in the Illustrated London News occupies the whole of page 20 of that issue which ran to 37 pages. There is no information about the curling drawing, or the scene on which it was based, in the newspaper, other than the caption. Was the drawing commissioned especially for the paper? 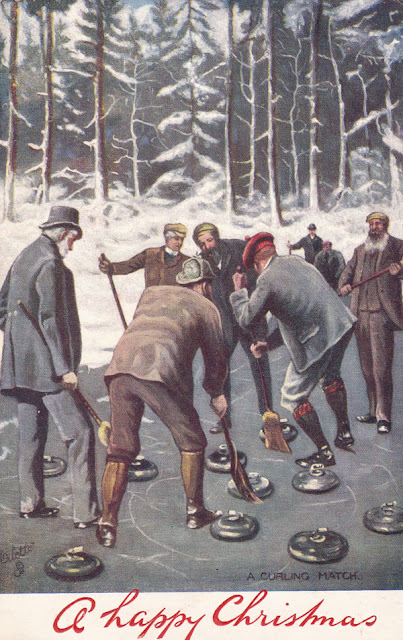 Here's another version of the postcard, with 'A happy Christmas' printed on the white rectangle at the bottom. As this space appears on the postcard without the greeting, see above, I surmise it is there simply to marry the scale of Stewart's original drawing with the standard dimensions of the postcard.

I wrote an article about 'The Curling Christmas Card' three years ago, see here. That included the image of another seasonal postcard. I closed that article with "David and I wish all followers of the Curling History blog, and indeed all curlers everywhere, 'Merry Christmas and a Happy New Year'."

David is no longer with us, but I will repeat that sentiment here. And add, 'May you ply your brooms merrily!'