'Summer Ice' is a traditional game played on a long, narrow table, with a marked target at each end. There is a channel round the table to catch any wayward stones. The rules of the game are very similar to those of curling.

Until recently, the above was the extent of my knowledge about summer ice. I had read it described as 'a most mysterious and unique version of curling'. I always associated it with villages to the north of Glasgow. I had never seen it played.

Earlier this year I came across a painting by Jemima Wedderburn, belonging to the National Galleries of Scotland, and this set me off to find more about summer ice. 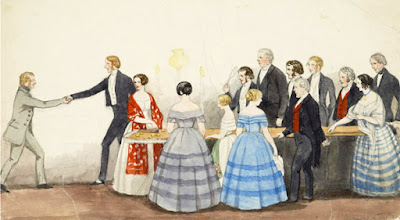 Although not currently on show, Jemima Wedderburn's painting can be examined in detail here. It is described: 'Summer ice. Sir Philip Eggerton arriving late, received by the Earl of Selkirk'. Lady Katherine Douglas, Isabella Blackburn, Jemima Wedderburn (the artist herself), Helen Blackburn, Mr Carnegie, and Colonel Oswald, are named in the painting. The occasion can be dated to Saturday, December 4, 1846.

Jemima Wedderburn was brought up by her mother, her father having died just before she was born. Her uncle was Sir George Clerk, an enthusiastic curler, a member of Penicuik Curling Club. Jemima was living at Penicuik House in 1847 and recorded 'The First Grand Match', see here. Given Sir George Clerk's enthusiasm for real curling, it is not surprising that there was a table top version of the game in Penicuik House.

Born in 1823, Jemima would have been only twenty-three years old when she painted 'Summer Ice' in 1846, one of her earliest works. Jemima went on to marry Hugh Blackburn, whom she had known since childhood, in 1849. She became an accomplished painter and illustrator, and many of her paintings can be found by searching for Jemima Blackburn, nee Wedderburn (see here). 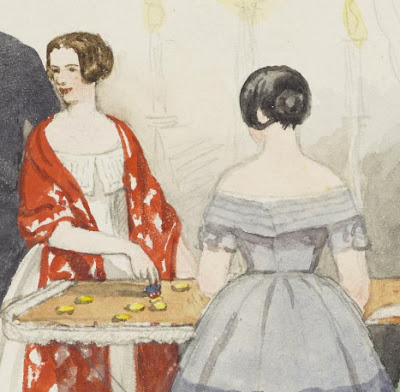 Looking closely at the painting, the 'summer ice' in the description looks very like what we would consider now to be a game along the lines of table shuffelboard.

Curlers have always been on the look out for substitutes for curling, given that ice was not always available for play outside.

Back in 2009, David Smith described the wonderful curling-related references that could be found in old newspapers, see here. In the Glasgow Herald of October 28, 1850, he had found an advert by Andrew Galloway of 105 Hope Street, Glasgow, which proclaimed, “The subscriber begs to announce that he has lately introduced an EXCELLENT SUBSTITUTE for ICE, whereby the NATIONAL GAME of CURLING may be enjoyed within doors."

Galloway's tables were reviewed in the Glasgow Sentinel of November 2, 1850. The article notes that earlier table curling games had not been too successful, saying, "Few of these substitutes have yet realised expectation." However, it continues, "The most successful effort that we have yet seen has been made by Mr Galloway, in Hope Street, who has contrived a table, which will enable the curlers to enjoy themselves, in all weathers equally as if they had the glossy surface of a curling pond to act upon. The table is a long plank of mahogany, beautifully smoothed and polished, with the 'tee' and the 'hog-score' carefully defined; and the stones (which are made of cast iron) are polished to correspond with the surface on which they glide."

The article goes on to describe that the stones are prevented from falling off the sides of the table by a surrounding 'hollow', obviating what has been seen as a defect in previous attempts to provide 'summer ice'.

Galloway's adverts proclaim, "The style in which the apparatus is finished is such as to render it an ornamental piece of furniture, suitable for any mansion."

Mansion houses were not the only places that had summer ice tables. The Crichton Royal mental hospital in Dumfries had one, according to the yearly report by its medical superintendent Dr Browne, as reported in the Dundee Courier of May 4, 1853. 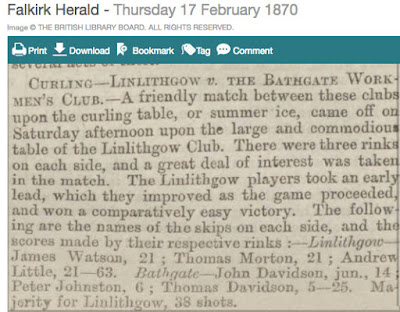 In 1870, summer ice was popular in Linlithgow and Bathgate. 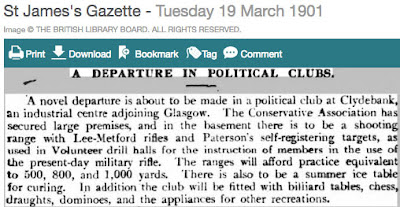 By the beginning of the twentieth century, summer ice tables were in use in many different places, and in many towns and villages throughout Scotland. The Conservative Association in Clydebank is just one example, from 1901, above.

The first mention of summer ice in villages to the north of Glasgow that I can find is to Aberfoyle in 1896, where it was being played in the 'Reading Room'. The sport received patronage from Lady Cayzer of Gartmore House who donated a trophy to the recreation clubs of the district for summer ice competition. The Stirling Observer on April 4, 1914, records the 'Summer Ice Club At Home', at Gartmore, an evening of entertainment, the highlight of which was the presentation of the Lady Cayzer Cup, won back from Aberfoyle that season 'after a most exciting contest', the deciding match having taken place at the neutral venue of Buchlyvie. To each of the four winners of the Lady Cayzer Cup, her ladyship gifted 'a beautiful case of silver tea spoons'.

Agnes Cayzer was wife of Sir Charles Cayzer, see here, the Glasgow ship owner, who died in 1916. She herself died in November 1919. In the years which followed, the Cup which bears her name became the premier summer ice competition of clubs in the district. A minute book, still in the possession of the Buchlyvie summer ice players, records the following clubs playing for the Lady Cayzer Cup in the 1930s: Buchlyvie, Kippen, Drumlean, Killearn, Balfron, Gartmore, Renagaur, Aberfoyle, and Brig o' Turk. As many as fourteen clubs have played at various times.

In 1939, the Stirling Observer of December 7, records that the Buchlyvie Summer Ice club met on Tuesday, Thursday and Saturday evenings. 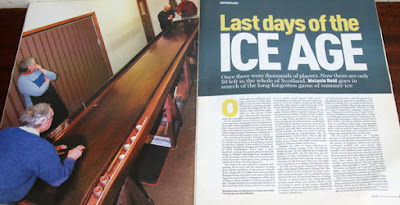 In 2002, Melanie Reid wrote a feature about summer ice in The Herald magazine, entitled 'Last days of the Ice Age'. Read this online here. This is a wonderful article, beautifully written, a must read! It examines the history of summer ice, its relationship to shuffelboard, and records Melanie's conversations with David Smith, The Sheriff, about it. Through her words, I can just hear David waxing lyrical on the topic!

According to the Killearn Courier in 2006 only Aberfoyle, Buchlyvie, Gartmore and Kippen were playing summer ice in that year. The last AGM of the Forth and Endrick Summer Ice League was held on November 6, 2012, with only three clubs expressing interest, Aberfoyle having dropped out.

And sixteen years on from Melanie Reid's article, I was to discover that summer ice is still being enjoyed, although only Buchlyvie is continuing the tradition of regular play.

Last Wednesday evening I was invited to visit the village hall in Buchlyvie, to see the game for myself. 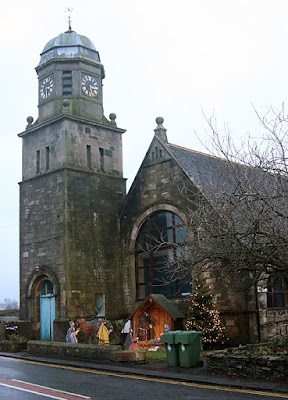 Buchlyvie is situated some fifteen miles west of the city of Stirling. The village hall was built in 1884, and today is home for many activities, including the playing of summer ice!

Eileen Mayhew was my contact. She suggested I arrive at the hall in time to see the preparations for the evening's play. One of the first jobs to be carried out was to warm the stones! Here they are over the radiator. Just as in curling, there are eight stones for each side, two per player. 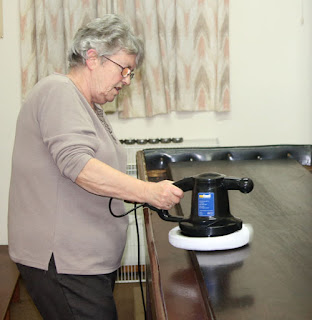 Silicone polish is used on the table these days, and there's a little modern help with the job that used to have to be carried out by hand. Eileen soon had everything ready for the arrival of the other players. 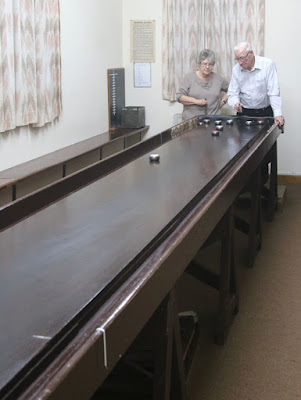 A fire in 1984 resulted in the loss of Buchlyvie's original summer ice table. What is played on now is the table that used to be at Balfron. The playing surface itself is a single plank of wood some 22 feet in length. The table has a room to itself in the village hall. 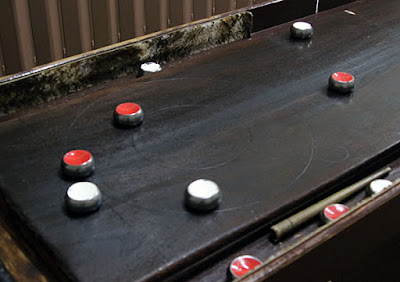 If you look closely you can see that the table is marked out with the house, and also smaller circles to assist the playing of 'points'. Note too the 'ditch' to catch the stones that fly off the playing area. 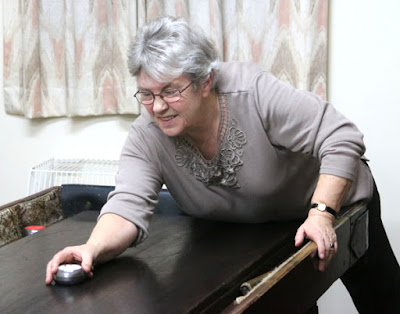 Eileen lines up her shot. 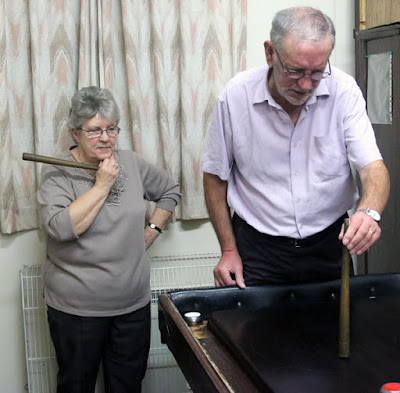 The 'stick' is used to give direction. 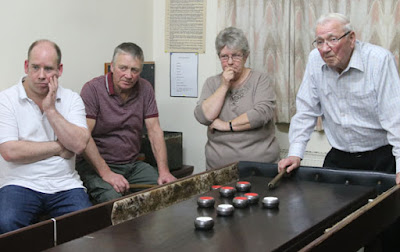 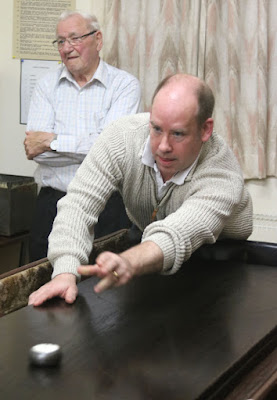 Stones must be played down the middle of the table, the points markings assisting with that. 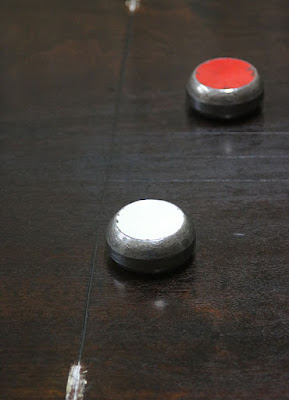 Just over the hog! 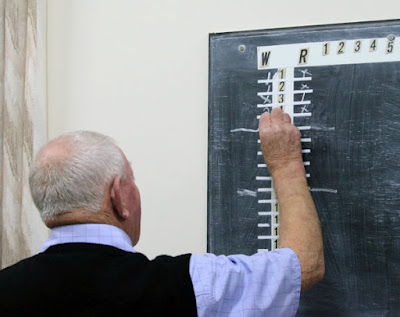 Keeping score.  Fifteen ends were played in the game. This was played with great skill, and with lots of enthusiasm! 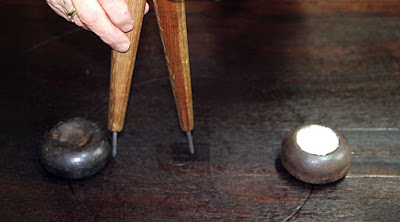 No measures were needed in the game I watched. Had one been needed it would have been carried out with dividers, as shown here with two older stones. 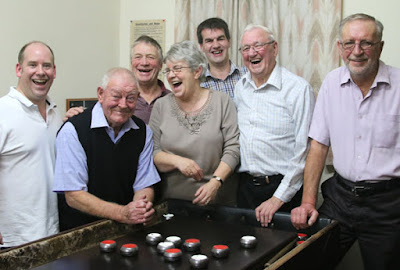 And here are the regular summer ice players at Buchlyvie. L-R: Richard, Alistair, Fergus, Eileen, Jimmy, Billy and Tam. Just seven of them now, but ..... magnificent!

So, what does the future hold for summer ice?

Thanks to Eileen and the other members of the club for their warm welcome last week. Photos are by Bob. The Jemima Wedderburn painting images are © National Galleries of Scotland. The newspaper clippings are © British Library Board, via the British Newspaper Archive. The hard copy of Melanie Reid's article is in the possession of Eileen Mayhew who was present when Melanie visited Buchlyvie in 2002. My special thanks go to Judy Mackenzie, without whose help this article would not have been possible.

This brought back such happy memories for me. I played summer ice when I lived in Buchlyvie and was the Secretary of the Club for a number of years. So glad to see it still being played.

I was so delighted to be passed your blog by the Gartmore summer icers, and read your kind words about my article. Because I live near Gartmore, I was always very proud of that piece, and it brought back great memories of Eric Billett & co. Happily, I found the weblink to the Herald article:
http://www.heraldscotland.com/news/12130228.Last_days_of_the__ice_age_Once_there_were_thousands_of_players__Now_there_are_only_50_left_in_the_whole_of_Scotland__Melanie_Reid_goes_in_search_of_the_long_forgotten_game_of_summer_ice/

When I was a wee boy I used to play summer ice when I went to visit my aunt and uncle in Stronachlachar. Stronaclachar had a summer ice table.

I remember someone saying when i was a youngster that summer ice was played on a leaded table. This was when I was below 10 i am now 63 can anyone clarify this.