Curlers have always liked to sing. Not necessarily on the ice of course, but at post-match festivities, and club dinners. Or on friendship tours, and at international competitions. At the 2004 Ford World Curling Championships in Gavle, Sweden, alternative lyrics to ABBA's 'Thank You For The Music' made an appearance: 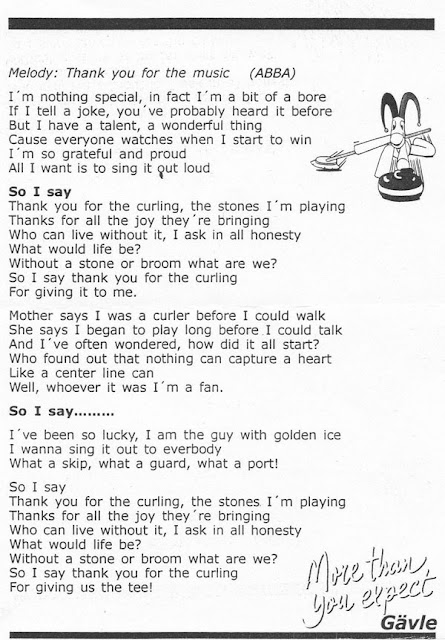 Thank you for the curling, indeed! Beware the ear worm, but the ABBA original is here, and a karaoke track is here, if you want to sing the curling lyrics, above!

Yes, curlers have always like to sing. If proof were needed of this statement, one only has to consult the Curlers' Library, where the very first printed publication about the sport is Songs for the Curling-Club held at Canonmills. By a Member. This little 16-page booklet was published in Edinburgh in 1792. So, the history of curling songs spans more than 200 years!

In the days before the Internet, and the various social media platforms, the spread of curling songs was on the printed page, and the best vehicle for this was the Royal Caledonian Curling Club Annual. In the 1845-46 Annual, for example, one finds, under Miscellaneous, a section containing six curling songs, where lyrics have been written to accompany well known tunes of the time. 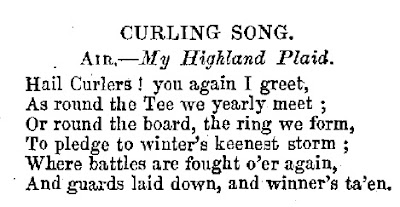 Here's just the first verse (of four) from one song submitted by 'A Keen, Keen Curler' from Chryston. 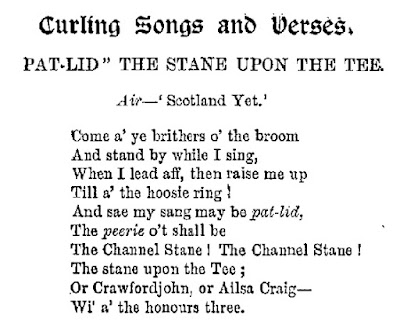 Fifty years on, the Annual for 1895-96 has a large selection of curling songs, now spread over 15 pages. The above is the first of three verses of 'Patlid: The Stane Upon the Tee'.

In the month (January 2018) that a Canadian side has arrived in Scotland to contest the Strathcona Cup, it would seem to be appropriate to reprint verses written by R Menzies Fergusson, the Chaplain of the Airthrey Castle Curling Club, recording the first such Tour, when Scots curlers visited Canada and the USA in the winter of 1902-03. D Bentley Murray, a member of the Airthey Castle CC, had been one of the tour party.

Here are Fergusson's verses on 'The Curlin' Scots in Canada', from the Royal Club Annual of 1903-04:

Upon the broad Atlantic
They got an awfu' blast.
It sent them nearly frantic
To reach the land at last.

And when they got transported
Frae boat to Halifax,
Their faces were contorted,
Their knees seemed made o' wax.

But sleep and aqua vitae
Soon put them on their. feet,
And a' were keen to meet ae
Wee rink that they micht beat.

When on the ice they planted
Their feet and threw a stane,
They fain would ha'e levanted,
And left the game alane.

They got an awfu' dressin'
Frae Nova Scotian men,
But lickin' wadna lessen,
Their hopes to win again.

Then Captain Kerr uprisin',
Declared they'd no be beat,
Though this was maist surprisin',
And so resumed his seat.

They chose their skips, selectin'
With caution and wi' care,
Resolved that by reflectin'
They'd try the game ance mair.

They drew, they wick'd, they curled in,
They cracked an egg to lie;
But aye the foe cam' birlin',
And counted shots forbye.

Wi practice and wi' patience
They managed whiles to score;
Enjoyed the handsome rations,
And drank the best, galore.

But when the leddies sported
Their cowes upon the rink,
The lads seemed a' transported
Wi' love, instead o' drink.

And up the howe cam' jumpin'
Each Tam o' Shanter'd loon,
And oot the hoose gaed bumpin'
The shots they had sent down.

They lost their heids, and endin',
The game was lost as weel ;
Maybe their hearts need mendin',
For hame they canna steal.

The hack was gey confusin',
As crampit men aloo',
But by and by tho' losin',
They won a game or two.

The ice was keen and brittle,
Far keener than at hame;
The play was unco kittle,
'Twas hard to win a game.

Guid men they were and michty,
The twal' stane bank they'd turn ;
At soopin' they were michty,
And played each rink a kurn.

Wi Doctor Kirk and Gibson,
Twa Provosts and a Prain,
Murray, Husband, Henderson,
And ithers in their train.

Braid Scots was what they shouted,
'Ca' cannie, up the howe,'
And then the foe was routed
At soopin' wi' the cowe.

At nicht wi sang and clatter,
They spent the time in glee;
Their friends across the watter
They drank in brews o' tea (?)

'Whit wey,' speers wee MacGreegor,
'Did oor chaps no' win a',
When playin' wi' sic veegor
On ice without the snaw?'

'Wheesht ! Wheesht ! Ye little deevil;
Yer better no' to ken
They just were far over ceevil
To thae Canadian men.'

'They gaed a'e Sabbath jauntin',
To see a waterfa',
When they'd been better chantin'
A Psalm, or maybe twa.'

The Scots were always feted
Where'er they chanced to be,
And some were nearly mated
Wi' leedies at the tee.

Now since their trip is ended,
And hame they've come ance mair,
We hope their play has 'tended
Good fellowship to share.

Note that the games against the Canadian women do get a mention (verses eleven to thirteen). More about these games here. And the team's controversial visit to see the Niagara Falls on a Sunday is not ignored!

The practice of printing curling songs, and poems, in Royal Club Annuals had died away by the 1950s. But, for the researcher, the collection of such material (many hundreds of songs) over more than a hundred years, must surely be worth academic study, if only for showing how the vocabulary associated with the sport has changed over the years. 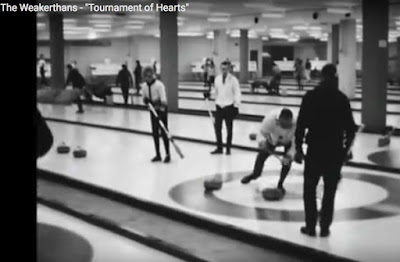 Original songs about curling can be found online today, and in many cases are now accompanied by video. My favourites? The Number 1 best curling song of all time, in my opinion, is 'Tournament of Hearts' by The Weakerthans. Listen to that, with the video, here. From the 'Reunion Tour' album, released in 2007, John K Samson on vocals. 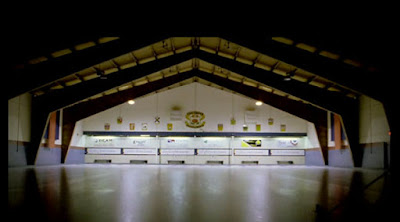 Number 2 of my favourites, because of the curling connection, is 'Silver Road' by Sarah Harmer and the Tragically Hip, from the soundtrack of the wonderful Men With Brooms film. This dates from 2002, and is online here.

Rounding off my top three is Alexander Morrison's renditions of 'The Silver Broom' and 'The Grand Bonspiel', composed by Alan Cairney, Kelty Records, 1985. The description of the 7" vinyl recording is here. No longer available to listen to online, as far as I am aware.

Added later: 'Curl' by Jonathan Coulton (here); 'It's a shore thing', produced by Rod Palson for the 2003 Nokia Brier (listen here). The Douglas Curling Club apparently has its own song (thanks Robin Scott). The ice rink at Lockerbie has a number of curling songs (thanks to Andrew Dalgleish for passing these on), and Airleywight Ladies CC has a booklet of songs (thanks to Dot Moran for the info). 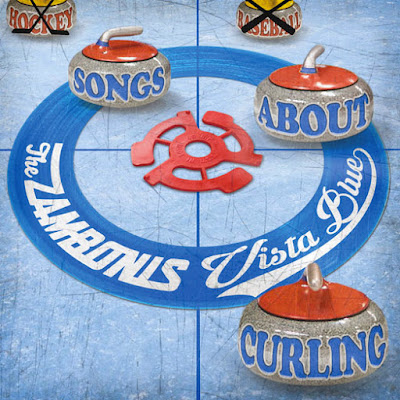 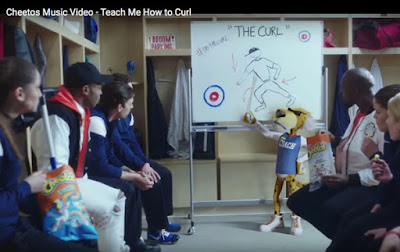 But coming right up to date is the music video 'Teach Me How To Curl', here, where Cheetos snacks, a Frito-Lay North America product, promotes the US Olympic curling teams in the run up to the 2018 Games. That's Chester Cheetah explaining things in the screenshot from the video above!

Just wonderful, and great fun! Thank you for the music (video)! #DoTheCurl 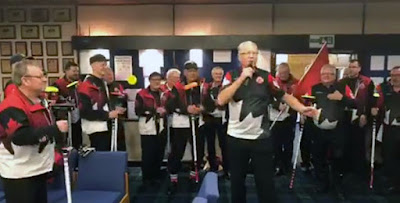 The visiting Canadian Strathcona Cup team with their version of 'We will rock you', January 12, 2018, at the Lanarkshire Ice Rink, listen here!

Thanks to Christine and Hugh Stewart for the Gavle lyrics to Abba's 'Thank you for the music', which provided the seed for this article. I do not know the provenance of these alternative lyrics, as yet. Other images are scans of Royal Caledonian Curling Club Annuals in my archive, or are screenshots of online videos. And thanks to those who have forwarded links to other curling songs, see 'Added later' above.
Posted by Bob Cowan at 15:09