The Battle of Carthula: Was this the first international curling match? 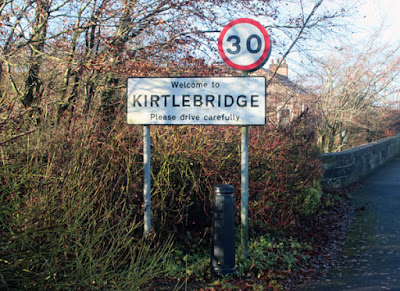 There is a rather odd reference to a bonspiel between Scottish and English curlers, said to have occurred in 1795 at Kirtlebridge. I wondered if this actually took place, so I set out to examine the evidence.

The match is referred to in History of Curling and Fifty Years of the Royal Caledonian Curling Club by the Reverend John Kerr, published in 1890. But it appeared in print much earlier than that. 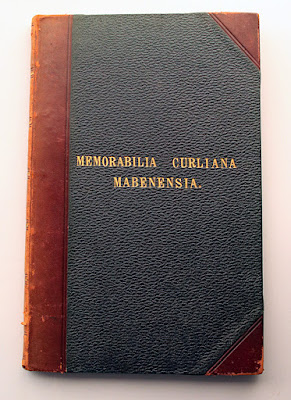 An account of 'The Battle of Carthula' can be found in Memorabilia Curliana Mabenensia, published anonymously in 1830 but now known to have been written by Richard Broun. Broun was born in Lochmaben in 1801, so he would have been in his twenties when writing 'Memorabilia'. In 1829-30 he was Secretary of the Lochmaben Curling Society. His father Sir James Broun was the Seventh Baronet of Colstoun, and at the time the President of the Lochmaben Curling Society.

The reference to the Scotland v England encounter can be found in Chapter 12, 'Poetical'. This states,
"The following Ossianic description of a celebrated Bonspiel, played at Kirtle Bridge, in the year 1795, is by Dr Clapperton, of antiquarian memory, Lochmaben; and was found among the MSS of the late WDWH Somerville, Esq of Whitecroft."

This is how part of the text looks in Memorabilia Curliana Mabenensia.

Ossianic simply means that Clapperton's work is in the style of the of epic poems published by the Scottish poet James Macpherson from 1760. Dr Clapperton was probably the Robert Clapperton who studied medicine at Edinburgh and Paris, and married Elizabeth Campbell at Elgin. The couple eventually settled in Lochmaben. Robert Clapperton was the grandfather of Hugh Clapperton, the African explorer. In A Sailor in the Sahara: The Life and Travels in Africa of Hugh Clapperton, Commander RN, published in 2007, Jamie Bruce Lockhart writes abouts Hugh's grandfather, "A highly respected doctor, family patriarch, and prominent member of the local well-to-do gentry, Robert Clapperton was a man of parts - amateur expert in minerology, compulsive collector of objects of natural history, and tireless investigator of Roman remains and early churches in the district, with a passion for local history and traditional ballads."

A 'passion for traditional ballads' sits well with Dr Clapperton having collected, or even written himself, the 'Battle of Carthula'. There is no evidence that I can see that Robert was a curler, but other members of the Clapperton family were - Hugh Clapperton became a member of the Lochmaben Curling Society in 1780, and Alex Clapperton in 1876, according to the minute book of the society, as transcribed by Lynne Longmore in Minutes of Note, 2012.

It remains conjecture how the poem ended up in the possession of William David Wightman Henderson Somerville, the Deputy Lieutenant of Dumfries and Galloway. He died in the 1820s, with considerable debts, these being subject to legal actions still unresolved in 1841. Just where these manuscripts are now, I do not know.

Here's the full text of the poem.

"Terrible was the day when we met on the face of the deep - when the sons of the Arctic pole glided along, like the vernal bird, when he skims the surface and dips his pinions in the slow-running river.

We passed over CARTHULA with a stride - the waters congealed under us, and the rocks trembled at our approach. Criffel and Burnswark fled before us, like the ship from the distant land before the blast of the boisterous west. The Tennis-hill leaped, like the bounding roe, over Whita, that lay as lies the hill of the mole under the belly of the wing-footed greyhound.

The Hart stood aghast, the spectators were wrapped in silence when the leaders advanced, like the roar of the mountain stream. Great was the strife of the heroes, and loud the clang of their arms, until the gloomy south dropped apace, and covered us with the mist of the Solway. Then it was that we spoke the words of peace, and retired to the Den of the Lion where the feast was spread - the feast of joy and mirth. The Druid of Patrick's-cell sat by the flame of the Flow, whilst the car-borne Knight of Springkell accosts the Chief of Tarras. 'The actions of my youthful years' (says he) recoil on my memory with joy; when I tossed the flying ball against the sons of mighty England, my hand returned victorious, and gladness dwelt on the face of my father. 'I too (says the chief) have been in battle against the sons of the south. Three days we fought on the face of the deep. On the fourth, the Sassenachs fled, the banks of Esk rang with joy, and we too had our fame.'

The King of the Ice sat by the exhilarating bowl, and pushed round the sparkling glass, whilst a chieftain hoary with years recounts the tales of other times. 'Often have I been famed in the fight' (says he), and my arm was strong in the battle; but my years have rushed upon me like a torrent, and I'm now numbered with the aged.' The grey-headed bard touched the tuneful string, and sent the melody of other times to our ears.

Great were your actions, O ye heroes! and mighty the deeds of the days of old. Here shall your sons meet; here, shall they say, met our fathers. O that our actions were as theirs - and that our deeds were recorded in the song, and should our grey-hairs go with joy to the house of silence.

We feasted, we drank, and we sang, and spent the night in joy."

The poem is accompanied by several explanatory footnotes. These could have been added by the poet, although perhaps they were inserted by the author of Memorabilia. These state that:

(1) 'Carthula - The river of Kirtle, then frozen; it rises at the troch of Kirtle and falls into the Solway Firth at Lochmaben Stone.'

(3) The Den of the Lion was a public house in Kirtlebridge.

(4) The 'Druid of Patrick's-cell' was the Reverend Craig, minister of Kirkpatrick-Fleming.

(5) The 'car-borne Knight of Sprinkell' was Sir William Maxwell of Springkell, 'who, when young, about the year 1747, with some others from the Scotch side, won a cricket match near the Greenbed or Roslin Nurse, betwixt Esk and Sark, where the best players in the north of England were beat.'

(6) the 'Chief of Tarras' was 'John Maxwell, Esq, of Broomholm, who was one of a bonspiel played by the borderers of both nations for three days at Liddlefoot, where, if the English had gained, bonfires were to have been lighted all over Cumberland.'

(7) The 'King of the Ice' was Patrick Smith of Craigshaws.

(8) The 'chieftain, hoary with years' was William Irving of Allerbeck.

The location of Kirtlebridge makes good sense for a curling match between players from both sides of the border from which it is but a few miles distant. It was on the main route north into Scotland from Carlisle. Today, the A74(M) runs to the east of the village, and the West Coast Main Line takes the railway just to the west.

Curling was certainly being played with 'channel-stones' in the eighteenth century, and it was not unusual for these to have names, see here.

The names mentioned in the story are those of real people, but whether they actually ever curled is a good question.

The Kirtlebridge match was said to have taken place in 1795. That there is mention of an even earlier Scotland v England bonspiel at 'Liddle-foot', over three days, makes me wonder if the whole thing is a fiction, and a made-up story. It is implied that there was a population of curlers just over the border in England, in Cumberland, at the time. I'm unaware of any evidence for this.

There are doubts about other information in the poem. Yes, William Maxwell of Springkell was real enough, but did he actually take part in a cricket match in 1747? The earliest recorded cricket in Scotland was in September 1785, according to the Cricket Scotland website here. 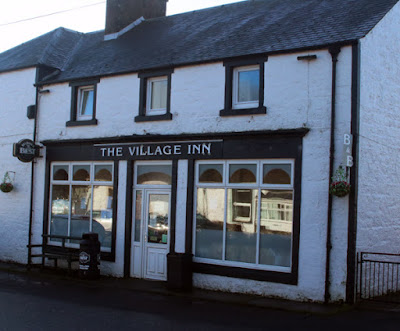 I remain sceptical of the story. But the fact that the participants of the Kirtlebridge match in 1795 are said to have feasted, drank, sang, and 'spent the night in joy' in a local hostelry, perhaps even the one in the village today (above), has a resonance with what I know of the history of our sport. It would be great to have corroborating evidence that this early 'international' match really did take place!

So, was Kirtlebridge the location of an international match between Scottish and English curlers? Fact or fiction? YOU decide!

Postscript: The English men beat Scotland at the Four Nations at the North West Castle rink, Stranraer, January 20-21, 2018. No bonfires were lit to celebrate this victory, as far as I am aware!