Curling in the Footsteps of History: The Empress of Ireland 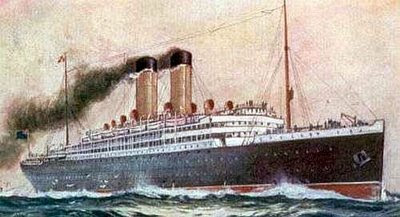 When the tourists travelled to Scotland, they did so on the Empress of Ireland, a new trans-Atlantic steamer built in Fairfield’s yard on the River Clyde in 1906 and launched in Govan, Glasgow, on Saturday 27th January that year.

The Empress of Ireland was a large and well-appointed ship of some 14000 tons, 550 feet long and with a breadth of 66 feet. It is not recorded in which class the Canadian curlers travelled, but suffice to say that, as was common at the time, she offered first, second and third class accommodation, the latter situated deep in the bowels of the ship.

A mere five years after her voyage carrying the Canadian curlers to their great Scottish adventure, the same Empress of Ireland had departed Quebec and was on her way down the St Lawrence river towards the open sea and her ultimate destination, Liverpool. The weather was alternatively fair and foggy. It was 2.00am in the morning of 29th May 1914. She had just dropped off the pilot at Farther Point, and was still close to the shore line. Her Master, Captain Henry Kendall spied a collier, the Storstad, laden to her Plimsoll line with coal on an inbound path up the river towards Montreal and also sailing close to the shore.

In Captain Kendall’s judgement, the collier was some eight miles distant, so he ordered his ship to starboard and to the centre of the river. Immediately after making the move, both ships were swallowed by an incoming fog bank – this, mind you, in pre-radar days and in confined waters. Captain Kendall fretted about the lack of visibility so decided to put his engines astern to take the way off his ship, this action taken in accordance with the Rules of the Road at Sea when maneouvering in the company of other ships. When he ordered the engines astern, he sounded three blasts on the ship's siren. (1 blast indicates a ship is turning to starboard; 2 blasts indicate a ship is turning to port, and 3 blasts indicate a ship is going astern).

The Empress slowed almost to a complete stop, but still had some forward way on. Suddenly, out of the murk, two masthead lights appeared to starboard. Storstad was heading straight for the Empress. Captain Kendall quickly ordered a sharp alteration of course to starboard, but alas it was too late to save his ship.

The sharp bows of the Norwegian ship sliced into the Empress amidships between her two funnels. The fully loaded Storstad punched into the Empress below her waterline, entering her for about 25 feet, and opening up a gaping hole some 14 feet wide. Water rushed into the starboard side, and Empress of Ireland quickly took on a list to starboard. Open port holes which should have been closed at sea, allowed the ingress of even more water. The damage precluded the closing of water tight doors, compounding the problems the ship faced. Within 10 minutes the liner lay on her side, some passengers who had managed to escape perched on her hull. One passenger commented, “It was like sitting on the beach, and watching the tide come in.”

There was only time to lower four of the lifeboats. Many of the passengers were trapped below in the lower decks, unable to escape in time.

Within 14 minutes the Empress was gone and she lies to this day 150 feet below the surface on the muddy bottom of the Saint Lawrence River. 1,012 souls perished that night. Strangely, for in those days, the Captain traditionally went down with his ship, Captain Kendall was one of the survivors and, on being hauled aboard the Storstad, was heard to mutter in a masterpiece of understatement, “You have sunk my ship.”

He was exonerated of all blame and later survived a torpedoing in the Great War.
Posted by Bob Cowan at 17:15

I've finished it all now, Copey and I see no reason to change my judgment that it's great piece of work.

Any chance of printing it for any of the tourists who wish to take it back to Canada.

Here, here David. Just love the phrase - ' sundry adjournments to the bar ' - must tell the wife that's what I'll be doing on Saturday night !!

Who knew you could find very interesting maritime history posts in a blog about curling :)))
Many thanks.. I created a link to your work straight away.