The Prince of Wales's Stones

When David McFarlane, president of Scottish Central Province of the RCCC, asked me during the recent Ramada Perth Masters whether Central Province was the oldest I had to confess that I had not the slightest idea. Moreover, I said, since provinces were permissive when they began and did not form part of the organisation of the Royal Club, that is, groups of clubs could form one if they wished, and organise themselves, there was very little in the Annuals about the early history of provinces.

Anyway, the query set me off on a search through many an early Annual, and I found a number of items of interest which had escaped me in the past.

We all know that the first royal connection with the RCCC occurred when Prince Albert agreed in 1842 to be the club’s patron; and that permission to change the name from Grand to Royal followed the next year.

The agreement of Prince Albert was marked by the presentation to him of a silver-handled pair of curling stones. My rediscovery of the stones after a long search and a description of them are to be found in my article in the Scottish Curler of October 2003.

On the death of the first patron the club solicited the patronage of his son, Prince Edward, the Prince of Wales, and this was readily granted. This honour to the Club was also marked by the presentation of a pair of curling stones.

The Scotsman of 7 February 1863 reported the stones thus:
“…At the same meeting [last AGM] it was resolved to present His Royal Highness with a pair of curling stones, and it was remitted to the Secretary, Mr Cassels, to take steps accordingly. The stones will be forwarded in a few days, and are at present lying at the shop of Messrs Mackay, Cunningham, & Co., goldsmiths to the Queen, Princes’ Street. They are made of green serpentine, found near Crieff, Perthshire, and generally known to curlers by the name of Muthill stone. The handles, the wood of which is of oak from Linlithgow Palace, are richly mounted in silver. The plates which screw on to the stones are elaborately chased with thistles, forming shields in the centres which bear the following inscription:-“Presented by the Royal Caledonian Curling Club to H.R.H. the Prince of Wales, Patron, 1863”. The handles are wreathed with thistles, engraved, and the mountings on each end of the wooden part have a wreath of oak-leaves and acorns executed in the same style. They have been beautifully designed and executed by Mackay, Cunningham, &Co.”

When I was looking for the 1842 stones, which many royal functionaries were unable to find in any of Her Majesty’s palaces, castles and houses, I was eventually told that a pair of presentation stones had been traced at Sandringham, the Queen’s English summer residence. When I sought to have them photographed I was told that they had been transferred to Balmoral, and when I was next passing the Queen’s summer residence in Scotland I found the 1863 stones in the factor’s office, where they were in use as a pair of bookends supporting some large volumes sitting on a window sill. I was disappointed that I had not found the stones of 1842 but I was pleased to see a pair of considerable grandeur. 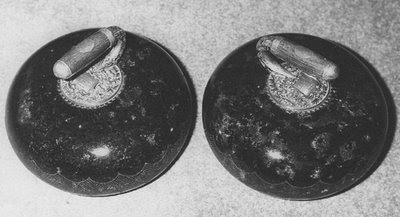 So significant were the stones that an illustration of them appeared in the Illustrated London News of 8 April 1863. Her Majesty graciously allowed this pair to be borrowed and displayed at the exhibition, held in Kelvingrove Museum and Art Gallery, Glasgow, when the Silver Broom Men's World Curling Championship was being played in the Kelvin Hall, in 1985. 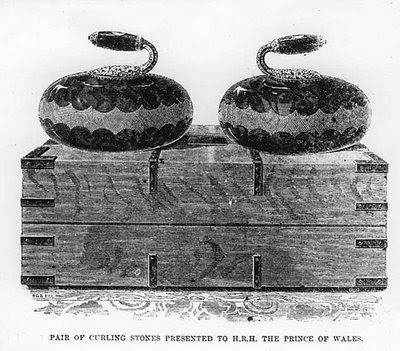 The discovery which prompted this article appears in an abstract of the RCCC Treasurer’s Account for 1862-3. It was the bill for the 1863 stones.

This was a very large sum to expend on curling stones.

Almost contemporary with this pair are the earliest surviving financial records of curling stone manufacture. Andrew Cowan made stones at Barbieston near Drongan in Ayrshire, and his account book survives for the period from 1865 until about 1889.

Stones were generally sold by him by the pair without handles. The price depended on the sort of stone and the degree of finish. About the cheapest price was twenty four shillings for a pair of Burnock Water. One can get some idea of what that price represents when one sees elsewhere in Cowan’s account book that he paid workers two shillings per day. The price of his cheapest stones, therefore, was the equivalent of the wages of a working man earned in two weeks of six days. Curling stones have always cost a fairly hefty price – but they did last for ever.

Below is an account from Cowan’s book for stones with handles sold not long after the making of the Prince of Wales’s stones.

(For the benefit of those not familiar with pounds, shillings and pence, before decimalisation in 1971 there were twenty shillings per pound. The shilling was subdivided into twelve pennies. Thirty-three shillings (33/-) was one pound thirteen shillings.) In 1876 a special pair of handles of silver and buffalo horn sold by Cowan cost One pound sixteen shillings.

From the above figures it will be very apparent that the stones presented to the Prince of Wales were very expensive indeed.

Captions:
1. Photograph of the Prince of Wales’s stones.
2. Drawing of the stones from The Illustrated London News.
Posted by Bob Cowan at 21:02

curious, from the curling stone ledger, and any known information... how would the various granites rank in cost? Crieff must have been a very beautiful (and expensive?) granite to be used for the Prince of Wales presentation stones...

You might find this chapter from 1890 of interest:
http://www.electricscotland.com/history/curling/chapter10.htm

I was interested to read this as I was born & brought up in Crieff and my father’s family is from Muthill. My grandfather Robert McRobbie, his father and uncle were all master masons. The McRobbies employed stonemasons and owned several quarries including the local Lucas quarry. The family produced curling stones of Perthshire Serpentine as well as dressed stone for buildings and viaducts. As my grandfather was born in 1866, the previous generations would have produced stones at an earlier date to the dates you quote. I wonder if your records show where the stones for the Prince were obtained ?

Thank you for this. We have been looking for information about where Crieff Serpentine stones were made, for this site - https://sites.google.com/view/historicalcurlingplaces/curling-stone-places

We don't have the information on where the Prince's stones were made. It would be great to find out that they were made by your ancestor!

Do PM me if you have further information.