Curling in the Footsteps of History: Part 3 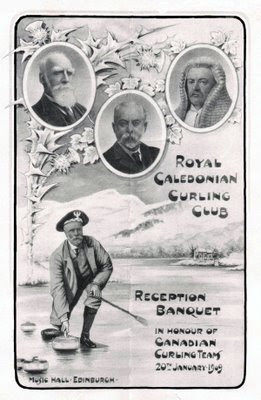 The 20th January was described in contemporary reports as “the red-letter day of the great tour”, for on that day the National Reception was given for the Tourists in the Music Hall, now the Assembly Rooms in George Street, Edinburgh.

The evening started at 5.00pm and, so as the tourists could gird their loins for the marathon ahead, they were given the day off and used the time to send telegrams back to their families in Canada, as well as taking the chance to visit “Auld Reekie” as normal tourists, as opposed to members of a VIP group.

The company numbered some five hundred and the evening was chaired by Lord Strathcona, the President of the Royal Caledonian Curling Club. Suffice to say that there were seven Lords of the Realm present at the evening, as well as the Solicitor-General of Scotland, a number of past-Provosts of Edinburgh, the Moderator of the Church of Scotland and the Reverend J Kerr, the Captain of the Scottish 1903 touring team. Prime Minister A J Balfour sent a telegram of greeting in which he greatly regretted his inability to attend the function.

The toast list was common for the time. Where a curling dinner today contents itself with a guest speaker to toast the health of the club to which a member of the club tends to give a whimsical response, the number of speeches that far-off day was nine. Each of the speakers spoke at some length and the main themes were a warm welcome to the Canadians, the special relationship between Canada and Scotland, the Empire and the Armed Forces.

Looking back, it is strange that the major banquet of the tour was in the first week - before any curling stone had been thrown in anger! A grand night seems to have been had by one and all, mind you and that is all that is important to record. 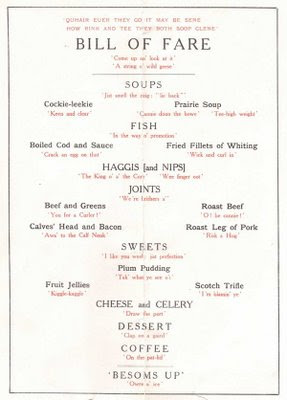 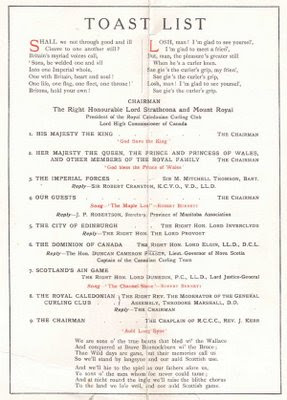 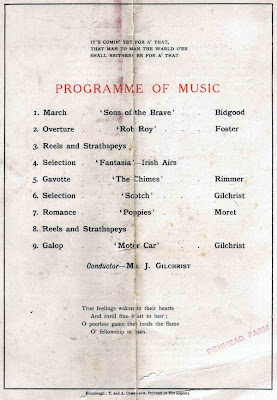 CHAPTER NINE – JACK FROST DOES NOT PLAY BALL, BUT GLASGOW RISES TO THE OCCASION!

Down through the years, Glasgow has proved herself equal to the challenge that curlers set her. Successful World and World Junior Championships bear testament. Perhaps the first time though, that Glasgow came to curlers’ rescue was in 1909. The Canadian tourists arrived through in Scotland’s largest city on Thursday 21st January. As the RCCC’s report put it in the 1910 Annual, “Other communities in Scotland might arrange to entertain the strangers at their festive boards; but Glasgow, knowing the National weather, had a notion that it would see much of them in the next three or four weeks. In St Mungo’s hand was the magnet that would attract them to the west, and hold them there.”

And the magnet? The newly-built Scottish Ice Rink had been completed in the suburb of Crossmyloof on the south side of the city. By the time the Canadians came to visit, it was already into its second season of business, having opened its doors for the first time in October 1907. Sadly there is no rink on the site anymore. Instead, shoppers walk the aisles of a Morrisons superstore, where before curlers toiled and brushed.

When the Canadians arrived at Queen Street station on George Square in the centre of the city, suffice it to say that they were met by the usual pomp and circumstance to which by now they must have become accustomed. An archway of brushes was formed by the welcoming curlers; pipers led the procession to the square and the party made their way to the North British Hotel beside the station for welcoming refreshments. Speeches of welcome were given and received and pins exchanged with the local dignitaries.

Friday 22nd January was the much-awaited day when the Canadians officially took to the ice for the first time. A series of trial matches was played against local clubs on both the Friday and Saturday and, in fact, let it be reported that the locals gave a good account of themselves – indeed they were up on aggregate, although the games were not “test” matches and therefore did not count in the overall competition. On the close of the first day’s play, the team were entertained to a grand dinner in the city’s St Enoch hotel, a railway hotel beside the station of the same name.

Much was made of the fact that the local rinks won because they were familiar, indeed comfortable with the ice conditions at Crossmyloof. Many ventured at the time that it would have been a useful exercise if the Scottish test teams had practised on the artificial ice before the official test matches later on in the tour.

On the Sunday morning, the party worshipped at Glasgow Cathedral. After the service, the visitors were shown round the Cathedral – a singular honour as it happens. Each of the tour party was presented with a copy of the sermon given by the Reverend Dr Cooper, Professor of Church History at Glasgow University.

Although some members of the 1903 Scottish team were unable to take part, most of them travelled to Glasgow on Monday 25th January so that the two teams could meet together in friendly competition. This time, the Canadians got into their stride – perhaps the practice sessions at the end of the previous week had helped them become acclimatised – and in beating their Scottish counterparts, gave a good account of themselves. The RCCC annual reports as follows, “Each Scot gave a neat memento to his Canadian opponent when they met on the rink, and a pleasant interlude for luncheon, with sundry adjournments to the bar to see if Riddell’s blend was up to the mark, made up a most delightful day.”

That evening, the memory of Scotland’s National Bard, Robert Burns, was celebrated at a dinner at the Windsor Hotel and a lusty rendition of “Auld Lang Syne” brought one of the most enjoyable evenings of the tour to a close.
Posted by Bob Cowan at 17:20