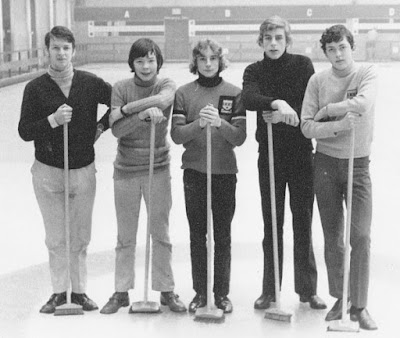 CIP-64. Back to school again today. This is a George Heriot's school team, at the Lanarkshire Ice Rink, Hamilton, in 1972. The young curlers in the photo are L-R: Bob Martin, Ronnie Brock, Mark Smith (skip), James Cowan and Graham Tait. I could not make sense of this at all, until Lindsay Scotland worked it out for me, confirming his thoughts with Ronnie Brock. Bob was not a player on the team, but had been last year's skip, and was the 1972 'coach'! The other four finished runners-up to Brian Alderman's Hutchesons' Grammar side at Hamilton in 1972, then won the title the following year when the National Schools Finals were at Crossmyloof. I eventually discovered that the photo was published in the January 1972 Scottish Curler, where the Heriot's team were described as 'strong and attractive'! (8.5x6.5in print, photographer not known.) 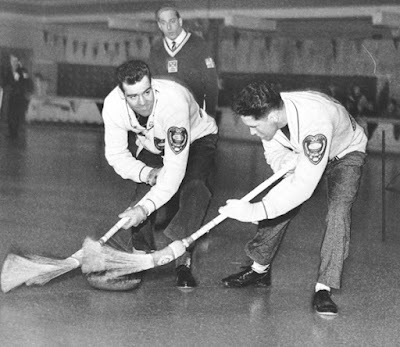 CIP-65. I just love these old photos of the brooms in action. Especially when they feature the Richardson rink. Here are Wes Richardson and Sam Richardson hard at work in a Scotch Cup match in 1962, against Sweden, in the Haymarket rink, Edinburgh. Note the difference in grips. Sam has an 'overhand' grip, Wes is sweeping 'underhand'. (10x8in print, by W Taylor, The Scotsman newspaper.) 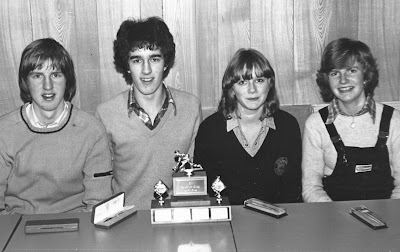 CIP-66. Another 'when we were young' pic! L-R: Martin Turner (skip, 18), David Ansell (18), Susan McLean (16), and Katie Wood (14). The photo was published in the March 1980 Scottish Curler, with the caption, "This young rink raised many eyebrows at Gogar Park Curling Club where they won a weekend competition for the Beard-Wick Trophy with a series of high-class performances." (8x6in print, photographer not stated.) 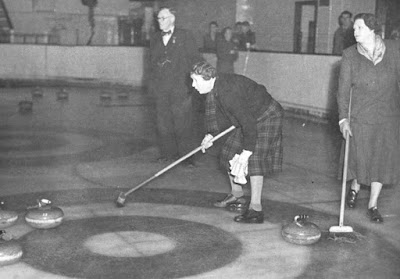 CIP-67. I'm not 100% sure where, nor when, this was taken. It must be at the Falkirk Rink as it's by a Falkirk photographer, in the 1950s. It could well be the final of the British Ladies Open Championship at Falkirk in 1954. If that is the case, it is Mrs Irene Cleland who is the skip directing play with a glove in her right hand. Note the duster on the ice at the front of the house, and another under the brush of the runners-up skip, Mrs Nan Briggs, at the back of the head. What exactly is the gentleman doing at the side of the house? (6x4.5in print by Thomas L Rennie, Falkirk.) 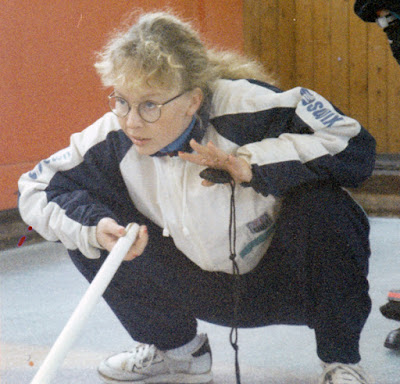 CIP-68. One of curling's great characters, Norway's Dordi Nordby had a competitive playing career that covered three decades, see here. She played in three Olympics, eighteen World Curling Championships, and twenty-three European Curling Championships. She skipped her team to the World Championship title in 1990 and 1991. The photo is not dated but would appear to be early in Dordi's career, 1980s I would guess. (4x5in colour print, by Erwin Sautter.) 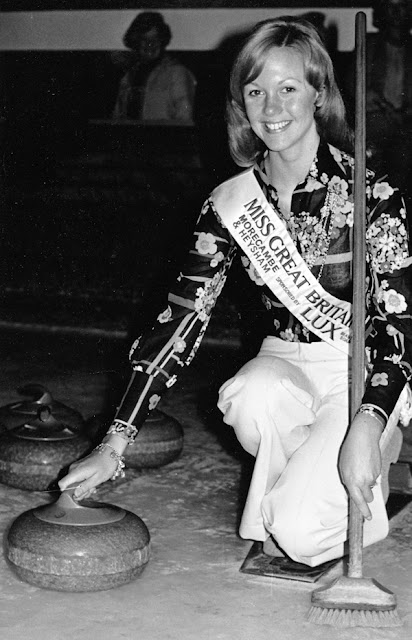 CIP-69. Miss Great Britain in a promotional shot at the Aviemore Ice Rink in 1973. Gay Spink had won the title the previous week at Morecambe, and this seems to have been one of her first 'duties', visiting the Aviemore Centre for three days, during which she got close to the ice in the rink for this shot. I wonder if she got to throw a stone? (5.5x9.5in print, by Pavel Latny, Aviemore.) 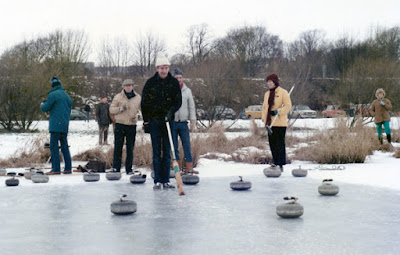 CIP-70. The venue I think is the pond at the Peesweep (Lapwing Lodge), on Glennifer Braes, south of Paisley. This looks like the Carmunnock and Rutherglen CC, or the Reform CC, but when? (I wasn't there, so that suggests sometime in the 1990s.) That's certainly Bob Kelly with a very fetching woolly hat, giving the ice with a corn broom. Anyone else recognise themselves? (6x4in colour print, photographer not stated.)

ADDED LATER: I got this one completely wrong. The curling is taking place on Castle Semple Loch, Lochwinnoch, in the 1980s. The photographer was Brian Alderman. Michael Burton is partially obscured behind Bob Kelly, and Helen Burton is on the right.

Thanks to Lindsay Scotland and Ronnie Brock for help deciphering CIP-64. Photos are as credited where the photographer is known. Check the archive (on the right) for previous Curling Image Project posts.