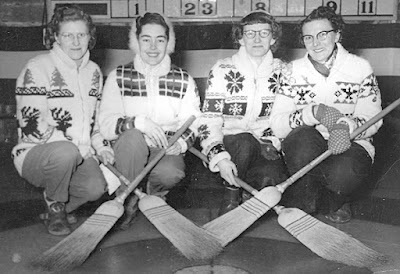 CIP-71. Hand knitted Cowichan sweaters were once a fashion statement on the curling rink. On the back of the photo it says 'Bennett Rink', but the individuals are not named. Does anyone know who they are and where they are from? The style of their brooms suggest that the photo dates from the 1950s. Certainly, Mary Maxim patterns for such jumpers were first published in 1954. Of course the real reason that I'm posting this photo online today is to give me an excuse to give the link to John K Samson's heartfelt tribute to the knitted curling jumper, which you will find here. Music Rocks Curling Tips 111 makes me smile every time! It was produced to promote a charity curling event back in 2013. More recently, this article in the Calgary Herald would suggest that knitted jumpers are making a comeback! In which case my own collection of knitting patterns for such sweaters, see here, may well take on a second life! (7x5in print, photographer not known.) 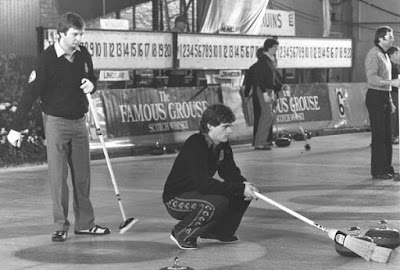 CIP-72. Kerry Burtnyk is directing play, with Graeme Adam behind, in the Famous Grouse Ayr International in 1983. The Burtnyk team were 6-5 ahead of Adam in the 3rd/4th playoff, but lost a four. Graeme's team was Ken Horton, Andrew McQuistin and Dick Adams. Burtnyk was skipping Rick Folk's team (Ron Mills, Tom Wilson, Jim Wilson) at the event. The Ayr competition, together with the Skol Edinburgh International were the main televised events, apart from Scottish Championships, in the early 1980s. (7x5in print, photographer unknown.) 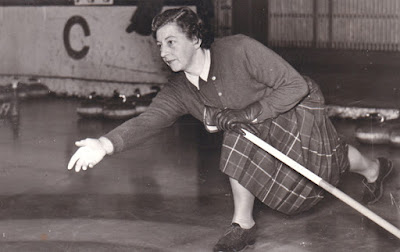 CIP-73. This photo of Janie Love (Mrs Tom Love) featured in the February 1954 issue of the Scottish Curler. This image accompanied a second article in a series entitled 'Women on the Ice'. The article indicates that Mrs Love had begun curling in 1936, and by 1954 was 'in the top bracket of lady curlers in Scotland' with her name already on number of trophies. In 1954 she was the President of Perth Ladies CC with 33 regular members and 16 occasional. (6x3.5in print, Star Photos, Perth) 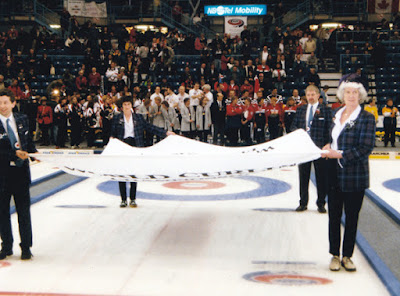 CIP-74. This photo is from the closing ceremony of the World Curling Championships in St John, New Brunswick, in 1999. Representatives of the local organising committee for the 2000 World Championships at Braehead have just received the World Championship banner into their safe keeping. Holding it at the back is Kirsty Letton and Ian Gillespie. Holding the front are Mark Callan and Judy Mackenzie. The photo was published in the October 1999 Scottish Curler. (7x5in colour print, photographer not stated.) 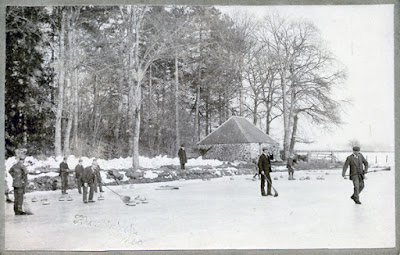 CIP-75. This is a 'cabinet card' from my collection. Cabinet cards are photographs mounted on stiff pieces of cardboard. The earliest cabinet cards date from the 1860s. Their popularity had waned by the turn of the century, as the photographic postcard became popular. This card probably dates from around 1900, and has the photographer's name (Macintosh, Kelso) stamped on the front. But where is this curling pond, with what looks like a curling house in the background? (6.5x4.25in)

ADDED LATER. Robert Walker has kindly supplied the information that the photo shows the Newton Don house curling pond (just north of Kelso), located the east side of Newton Don Bridge at the gates on the Kelso to Stichill road. The feed for the pond comes from the Stichill burn via sluice pit which controls the flow either into the pond or bypass to the River Eden. Repairs to the waterway stopped in 1963 when the plans to build Border Ice Rink started to become a reality. The hut was built by the Kelso Club to store the stones but the hut was vandalised and the stones thrown into the pond around 1963, some of which were found a number of years later when it was being cleaned out. 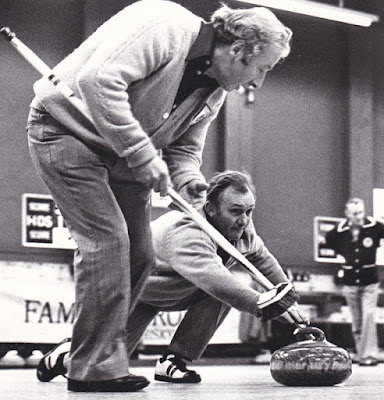 CIP-76. Delivering the stone is Hammy McMillan Snr, with William Findlay ready to sweep. The photo is of play in the Famous Grouse Inverness Invitational, but which year? It was Hammy who built the Stranraer curling rink attached to the North West Castle Hotel back in the early 1970s. His son and grandson, both also called Hammy, have made their marks in Scottish and International curling. (6x6.5in print by Blair Urquhart.) 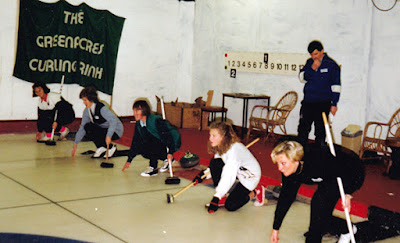 CIP-77. The quality of this photo is not great, but it shows a beginners' class in the two sheet annex at Greenacres in the mid-1980s. These were the days when the first objective of learning to curl was to be able to slide without a stone! It could not have been easy for the beginners back then. Note how some of the students are playing from 'temporary' wooden hacks propped against the back edge of the rink. These were made by the Greenacres owner John Stevenson. This was a clever idea, as it cut down on students having to stand around in the cold waiting for their turn on the centre hack, and John did not have to drill extra holes in the ice for additional hacks. Anyone recognise anyone? (6x4in print, photographer unknown.)

Photos are as credited where the photographer is known. Check the archive (on the right) for previous Curling Image Project posts.
Posted by Bob Cowan at 09:08