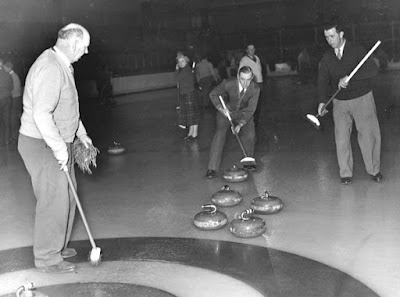 CIP-78. This is a scene from the final of the Royal Caledonian Curling Club's Rink Championship at Perth, in 1956. On the left is Tom Morris, with a duster in his hand! The sweepers are G Lorimer and J Christie. If you look closely you can see that some of the stones carry pompoms for identification. The image appeared in the September 1956 Scottish Curler magazine. According to the Annual for 1956-57, Morris's Perth CC team, which also included J R McEwan, were beaten 10-7 by Glendoick (K Melville (skip), J Smith, W Clark, and W D McEwan). (8.5x6.5in print, by Star Photos, Photography House, 75 Kinnoull Street, Perth.) 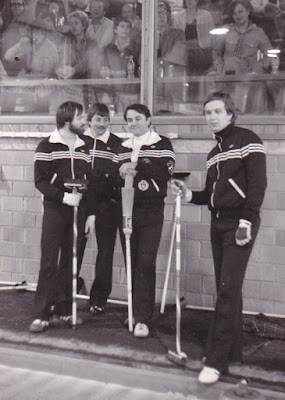 CIP-79. Some Swiss curling history today. Otto Danieli and his team of Roland Schneider, Rolf Gautschi, and Ueli Mülli were the surprise but popular winners of the Air Canada Silver Broom at Perth in 1975, having beaten Canada in the semi-final and the USA in the final. This 1979 photo shows Otto still playing competitively four years later with a new team. Otto is third from left in the photo, with the corn broom. Unfortunately, I don't have the names of the others in this Zurich Crystal CC foursome. Anyone? (4x6in print by Erwin Sautter.) 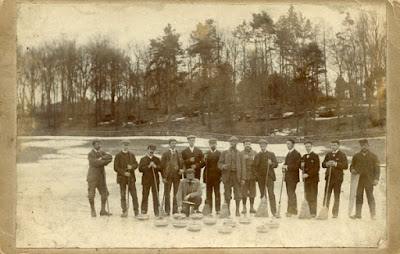 CIP-80. Here's another cabinet card from my collection. A group of fourteen curlers has posed for the photo. Note that the curler on the right is carrying a crampit. There's no indication on the card of where or when this was taken, or who is depicted in the photo. Often the photographer is named on such cards, but not in this case. However if you compare this photo with the image of the header on the Curling History Blog, it is the same group of curlers, although in a different lineup. Check it out! Assuming that the Royal Commission on the Ancient and Historical Monuments of Scotland has the correct attribution for their image, then CIP-80 is another photo of curlers at St Fort house, Fife, in 1895! (6.5x4.25in) 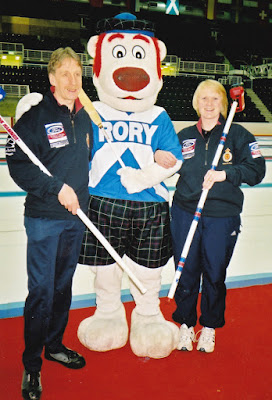 CIP-81. We haven't had an event mascot yet, so here is Rory, from the World Championships at Braehead in 2000, with the two Scottish skips at the event, Bob Kelly and Rhona Howie. The question is, of course, who was inside the costume? Can the real Rory now be revealed? I'm also wondering what was the first big curling event to have a mascot? (4x6in print, photographer not stated.) 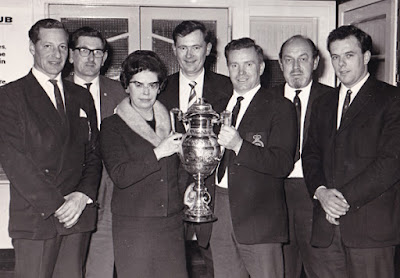 CIP-82. What a beautiful trophy! Mollie Kinnaird is presenting the National Open Curling Championship trophy to Bill Muirhead. Others in the picture are L-R: George Haggart, T Horne (Kirkcaldy rink manager), A Young, J Thom (Chairman of the Board at Kirkcaldy, and Derek Scott. Muirhead's rink had beaten the Harry Colville side 15-7 in the final. What year? (8x5.5in print, by David Ireland, Kirkcaldy)

ADDED LATER: Lynne Stevenson has provided the information that this was her grandfather's trophy! He won it outright for Heavy Horses and took the horse off the top and donated it to Kirkcaldy Ice Rink as the Kinnaird Trophy for the National Open Curling Championship. It got very damaged over the years and was returned to the family. Her cousin Bill in Australia has it now. 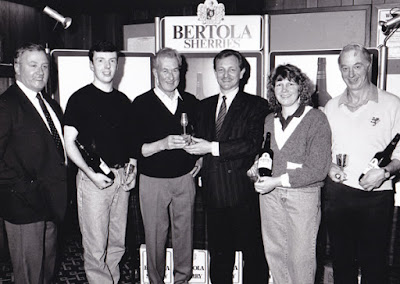 CIP-83. There are many large impressive curling trophies out there, but this is not one of them! Size isn't everything, of course. Still, we can add another alcohol sponsor to the list, ie Bertola Sherry. Baxter Wilson, third from left, receives the Bertola Sherry Knockout Curling Tournament trophy, played for by members of Atholl Province at Pitlochry in 1991. Dennis Marmion (national accounts manager for Peter Thomson Agencies) is presenting. Others in the photo are James Dykes (sales merchandiser for Peter Thomson Agencies), Rory MacDonald, Jane Fernie and Douglas Beedie. (8x6in print, by Richard Allan, Photographer, Stanley, Perth.) 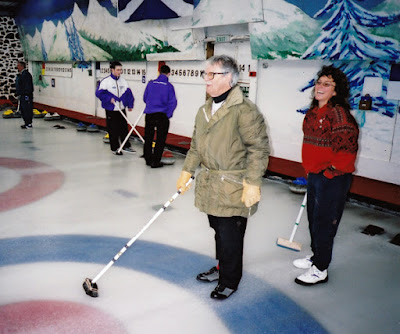 CIP-84. Here is the great Erwin Sautter from Switzerland, many of whose photos feature in the Curling Image Project. Erwin was one of the first international curling friends I made on the press bench at the 1980 Silver Broom. Indeed the photo is of the Brass Whisk, the bonspiel for members of the press corps who attended in large numbers the major international championships back in the day. Erwin is skipping against Christina Lestander. The venue is of course Greenacres. The year 2000. I wonder who won? (6x4in print, photographer not stated.)

Thanks to Lynne Stevenson for extra information of CIP-82. Photos are as credited where the photographer is known. Check the archive (on the right) for previous Curling Image Project posts.
Posted by Bob Cowan at 08:43