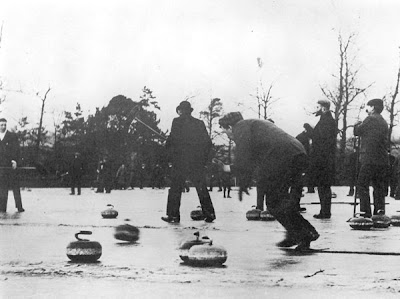 Top photo: A clear case of the kiggle-caggles. New Farm Loch, Kilmarnock, beginning of the twentieth century, from the author's collection.
Posted by David Smith at 12:57 2 comments:

In November 2006 the Scottish Curler printed an article by David Smith about the attempt of the RCCC in 1850 to institute a uniform for its members. This had been prompted by his finding a button which had been produced as part of that uniform.

The article read:
"At a meeting of the Representative Committee of the Royal Club held on July 25, 1849, a Mr Piper exhibited a pattern of a curling coat, with designs for buttons for the same, and as a result, the matter of a Royal Club uniform was remitted to a Committee.

The Committee set to work at once, and by August 22 decided that there should be a club uniform 'consisting of Coat, Vest, and Trowsers, made of Tweed Cloth of one pattern and quality, and strongly recommended the full suit, and at all events, that each member should provide himself with the coat.

The Meeting also resolved, that the groundwork of the cloth shall be as nearly as possible of a Granite colour, checked with blue and green bars, the blue being the royal colour, and the green emblematic of the broom.

The Meeting further resolved, that the price of the cloth shall not exceed 5s. per yard, but in the meantime directed Mr Piper to procure pattern cloths, at the lowest possible price per yard; also to give an estimate for the making and mounting, likewise an estimate of a full dress button, per set, - the button as fixed on at the General Meeting.'

John Piper, who appears as member of Edinburgh Operative Curling Club, instituted in 1849, and as member and Representative Member of Waverley, instituted in 1848, in the RCCC Annual for 1850, and whose warehouse was then at 37 South Bridge, Edinburgh, lost no time in complying with these directions for on 30 August the committee met again and '…In compliance with the directions of last Meeting of Committee, Mr Piper laid before the Meeting, four pieces of Scotch Tweeds, of the same pattern as approved of by last Meeting, and of different qualities, No. 1, 3s, 9d. per yard. No. 2, 4s. per yard. No. 3, 4s, 6d. per yard. No. 4, 4s. 6d. per yard, and the Meeting having carefully examined these pieces, selected No. 4 thereof, and resolved that it shall be the sample cloth for the Uniform of the Royal Club, and directed that it be registered in the name of the Clothier to the Royal Caledonian Curling Club, to be hereafter appointed.'

Piper’s charges for making the various garments and supplying sets of buttons were approved and he was formally appointed Clothier to the Club.

Piper made sure the curling public was aware of his appointment as clothier by putting a prominent advertisement in The Scotsman of November 14, in which he stated that he was 'now prepared to execute orders for the UNIFORM. For the convenience of those visiting Edinburgh, he will have at all times a number of Suits ready-made of various sizes. CURLERS ATTENDING HALLOW-FAIR are particularly requested to call and inspect it…'

Ten days later the advert contained this additional exhortation:
'CURLERS
Whether wanting the Uniform or not
Are particularly requested to call and inspect it.'

Piper’s enthusiasm does not appear to have been matched by the members’. There is no depiction of any curler wearing the uniform. Indeed, at the annual meeting of July 26, 1853, Mr J.O. Dalgleish observed that the uniform had only been partially in use and moved successfully that the subject be reopened. A new committee was appointed but the matter seems to have gone no further.

Despite the fact that he bought for himself the very recently painted picture of the Grand Match at Linlithgow by Charles Lees, and, properly proud that he was the owner of this magnificent and inestimably important painting, made this part of his advertisement in November 1853, John Piper’s name no longer appears as member of any club after the Annual for 1856; and there is no further mention of the uniform in the Club’s Annuals. The reason may well be what the online catalogue of the National Archives of Scotland shows, namely that on November 10, 1855, John Piper, Edinburgh, Tailor clothier, was made bankrupt; and that he was discharged from bankruptcy in April 1859. Quite a come down for the 'Master clothier, employing 42 men' shown in the Census Return of 1851 as living with his wife, four daughters and a servant at 5 St John’s Place, Edinburgh.

This may explain why, although I have been searching out, and collecting, curling material for about forty years, it was not until September 2006, that I saw for the first time one of the buttons that Piper had had designed for the Royal Club. The button was for sale in an internet auction, and my excitement at this very rare find can perhaps be imagined by other collectors.

I was successful in bidding for it. The picture (above) shows the result - a fairly large copper button, 1.125 inches in diameter, containing, within a border of Caledonian thistles, all the other insignia necessary for a Royal Caledonian Curling Club - crossed broom-kowes, framing a pair of curling stones, above which is a very un-Scottish-looking crown, and below which is a very complex and difficult to read monogram, RCCC.

On the reverse the words JOHN PIPER SOUTH BRIDGE ST. EDINBURGH encircle the registered design mark which records that the design was registered in 1849. Piper produced two sizes of button of which this is the larger. It is a pity that this one is unfinished, for the Royal Club specified that the buttons would be ‘all best treble gilt’."

David continues this story for the Curling History blog: "Curiously, just after publication, a keen member of The British Button Society, Rex Butler, contacted the Royal Club to find out about a button which he had come across when cataloguing a collection of buttons in Birmingham Museum. He had correctly deduced that the cipher at the bottom of the button was 'RCCC' with the same letters reversed and superimposed. That was a very clever deduction for the cipher did not resemble much to me when I first saw it. The Royal Club passed on his email to me. I sent him a copy of my article. In an exchange of emails we each expressed astonishment to the other that both of us had come across a single example of the button almost simultaneously.

Recently Rex Butler has been again in touch, this time directly with me. He told me that The British Button Society, of which he is the membership secretary, had been invited by a firm of button-makers in Halesowen to inspect a number of old dies for buttons which they had come across; and to give advice as to their identification and preservation.

Some of the dies were indexed in a large book and when he was looking through this an entry for the Royal Caledonian Curling Club of May 25, 1962, caught his eye. The entry gave the die number, M740, and button sizes as 36” and 27”, that is, of 36 and 27 'lines' respectively, the line being one fortieth of an inch. He found the dies and photographed them, and some of his pictures accompany this posting.

In a later email Rex explained in detail the whole process of manufacture of dies and buttons. These dies were for the making of horn or nylon buttons. One fact surprised me: 'horn' includes hoofs of cattle.

I have in my collection six of the smaller size of button from these dies. They are dark bluish or black. They are the only examples of this button that I have ever seen. Is there any Royal Club member, or descendant of one, who has any such buttons?

There does not appear to be any particular event for which the buttons would have been created. I have looked in vain for any mention of buttons in the minutes of Annual General Meetings as published in Annuals around the appropriate time. The date of the order (1962) does not seem to coincide with any incoming or outgoing tour to or from Canada and the United States." 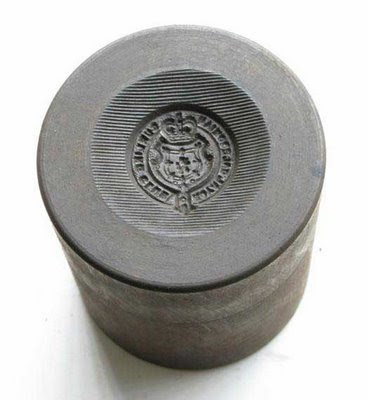 Rex Butler explains how the dies are made and used. "The method of making the dies for these one-piece moulded buttons is for the die sinker to make a female master die (above). Usually, a lead or other soft material impression is taken from this, and sent to the customer for approval. If approved, a male master die is made from the female, after hardening the latter. The male is made by shaping a metal bar to an approximate contour that will fit the female (usually, a concave female, so a convex-ended bar for the male), heating the male bar so as to soften the metal, and then forcing it into the female, using a powerful press. The result is a mirror image of the female die, as you can see from the photo below. The male is then hardened, to prolong its life. Once this is done, it is used to make the female production dies from which the buttons will be made (bottom photo)." 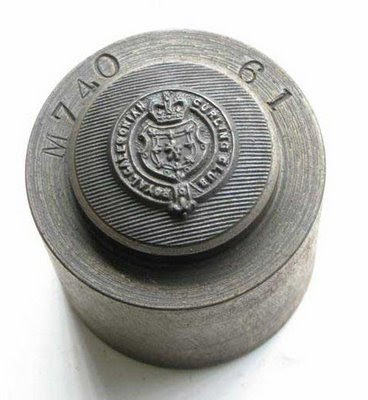 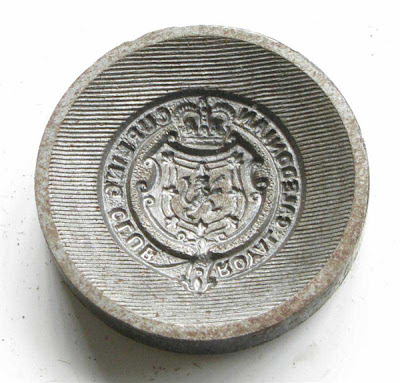 These photographs are courtesy of Rex Butler. Find out more about buttons here.
Posted by Bob Cowan at 19:50 1 comment: