What a pleasure it is to read in a newspaper of a by-gone age a piece which was intended to be read as literature. The following essay appeared in The Glasgow Herald of Tuesday, January 17, 1871. There is still a railway station near Ravenscraig above Gourock (at Branchton) but the suburbs of Greenock have crept up the hill, and it is no longer a solitary place. The inspiring view across the Firth of Clyde is still there, however, and one can see the Holy Loch and Glen Lean and Glen Massan and the Kilmun Hills. The article is called 'The Ravenscraig Curling Pond' although this is not accurate, and the pond appears to be the rectangular curling pond shown in the Ordnance Survey maps of the area, and to be No. 2320 in the Historical Curling Places list, see here. I am grateful to Bob Cowan for help in identifying the pond. The Gourock Curling Club's website indicates that this pond was opened in January 1867.

The author of the article is not named, other than as a 'Correspondent on the Ice'.

“The Ravenscraig Station, upon the Wemyss Bay Railway, is a solitary place. It lies among heathery wastes, where the whaup finds a refuge. Not a long way from the station the Ravenscraig Curling Pond is sheltered among leafless trees, and screened from the snowdrift that comes over the braes. The pond is a pleasant place in the summer time; the brood of the wild duck find shelter about it. In the winter time the curler knows it is the earliest frozen pond on the sea coast. The naked larch and the black fir form its background; while a brick cottage, lit in the low sunshine, casts rainbow shadows into the ice. In the mist of the winter day the mist the crisp snow has made the whole land beautiful. The brown uplands beyond the Copper Mines are flaked with snow that tempers their blackness. Beyond the heights of Gourock stretch the Argyllshire ranges – the flanks of Glen Lean and Glen Massan, dusky mountains across which the snow has been driving. Against the clear sky the snow shows but faintly – it magnifies by its delicate devices the Kilmun hills. The ravines of Ardentinny Glen melt in a wilderness of snowdrift, across which the sun scatters a tender light. The mouth of the Holy Loch reflects the cloudless sky. It is hardly possible to witness a brighter landscape than this glimpse, with its broken foreground, that light from the placid sea, and that shadowy mountain-land. Ravenscraig Curling Pond is environed by wintry aspects the artist prefers to the hues of the summer. The frosts of the past days had pardoned the ice; the entrance fee of a sovereign had given me a claim to the pond. The pond was the gift of the Lord of the Manor, and so far has been completed. A screen of laurel would add to its look. The club is famous for good players and for the victories they have won. When I reached the pond these had all gone to a great “bonspiel” somewhere. Those left behind were doubtful. The snow had covered the ice; with a snow-rake a rink was cleared, but constant sweeping did not keep the ice bright from the fall. The air was wonderfully silent – the snow folded out the bleakness of the fields.

Curling stones were brought from the club house, skips were chosen, and sides were picked. The skips knew the game: they stood beside the tee, swept away the snow, and gave the green hands very sage advices. One skip or captain of the rink was a very stout man, who used few words, and was evidently accustomed to being obeyed; the other skip was more voluble and eager in his way. The advices referred to “guards”, “hoggers”, “wicks”, and other terms incomprehensible to those who had never thrown a stone before. I was hopeless of knowing what was to be done. A dictionary would have given little insight. The play commenced. When my turn came the skip on my rink shouted in a voice of thunder, “Send it up all your might”. I lifted the curling-stone to a level with my haunch, threw it forward with all the force I could spare, and struck the ice that left a star more brilliant than the Star of India. The curling-stone went whirling along the ice, drove every one out of its way, crossed the opposite tee full speed, and shot up the snow-covered bank. A shout of dismay followed my shot. I had nearly broken the ice. Another such shot and I would ruin the rink. The skip came over to me with a face full of concern. If I had attempted a burglary he could not have looked more severe. “Never lift your stone more than six inches above the ice,” he said, “and push it rather than throw it.” I discovered that the advice contained one secret of curling. My next caution was a mysterious hint not to send my stone “through the house”. The club house stood opposite the end of the rink, and I believed the suggestion was a joke about driving my stone through it. I smiled at the jest, and hurled up the second stone swifter than the first. It swept across the tee, and up the bank like the ricochet of a cannon shot. The skip sprang out of its way and asked what I had for breakfast. I frankly explained, and discovered he was jesting at the strength I wasted. My turn came again. I had not gained much knowledge by listening to the jargon. Our burly skip cried, “A guard! A guard! We have four stones in the house”, and indicated with his broom that I should play gently towards it. I threw the stone with less vigour. A stout burgh commissioner, the skip, an excited Irishman, and three or four besides, frantically jumped in front of the stone, swept the snow away, and shouted, “Sweep him, sweep him, sweep him up, he’s a bonny, bonny guard.” Suddenly the other side cried “A hogger! A hogger!” and the stone was ignominiously pushed aside.

The next player’s stone landed in some dangerous spot, and I was asked “to lift it firm”. I hurled the curling-stone swiftly, struck some other stone, rebounded from several stones, and knocked all our own winners out of the ring. “You’ve cleared out the premises,” the skip cried; “I couldn’t have done it quicker myself.” This mischief seemed worse than going through the house, but I patiently waited for light and encouragement. Once more the skip cried, “A canny, canny draw on here,” holding his broom in front of the stones.I looked at the brush and then at the stone, and threw it. “Bonny laid”, someone cried as the stone glided along, struck a stone wide of the mark, drove two of the opposite stones away from the mark, and landed on the centre of the tee. “A pot-lidder !” “A pot-lidder !” cried several voices; and the skip added, “Wha said you wasna a curler?” I could not see what had happened, and believed I had created new devastation. I crossed the tee, and was pleased to find my curling-stone on the central mark. “A guard! A guard!” cried many. A curling-stone came sweeping along, struck another stone, rebounded against my stone, and sent my “pot-lidder” right up against the bank. My sudden confidence again disappeared.

My turn came round but slowly. “Another pot-lidder”, cried the skip, and this time my stone went out by “the back door”. The second stone I held more cautiously. “A wick off here, and ye’ll touch here, and ye’ll seek him out”, cried the skip. If he had given his commands in Greek or Gaelic they would have been equally intelligible. I sent the stone forward, and was relieved to hear that “I had found him out”, in a wholly unexpected way. The “unknown tongues” were being interpreted when a new trouble appeared. From Gourock several yachtsmen came, and added their “lingo” to the curling tongue. One curly-headed man told me “to take the Commodore upon his lee quarter."

Where the Commodore’s lee quarter lay I could not see. I threw and missed it, but got what a skipper called “a wipe up in the wind”, took a “two sticker” right in the broadside, and carried her “to leeward of the buoy”. I was in despair at following the naval instructions given. I was asked to take “a wick off Paul’s stern, and I would break as many eggs as our steward would want for that day.” “If I only cleared the port my shifting ballast would take me through the schooner’s lee.” I was “to headreach somebody by half a length.” Finally I was told that “if I took the Captain heavy on the starboard side he would never reach the only port open.” The Captain took it easy, and looked on while my own stone went through the port and “lifted” our own “pot-lidder” half way up the bank. I felt satisfied it would take no ordinary patience to pick up curling under such difficulties, and would recommend tyroes, whatever may be the inducements held out, to keep clear of Ravenscraig Pond, unless they have had a preliminary course of naval instruction. While the play was still warm, the sailors found “the dog watch” had come round, and we left as the sunset was fading into purple and the zenith deepened to the night. The crescent of the moon struck a shaft of silver into the burnished ice. The hush of the hills was falling about us as we trudged down the Larkfield Road towards Gourock.” 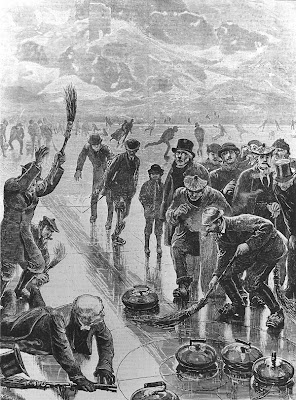 Sadly, my researches have failed to uncover any picture of curling of this period in this area. However, this lively woodcut of the game in full swing in the Queen's Park in Edinburgh gives some idea of the sort of scene the anonymous “correspondent on the Ice” had before his eyes. It first appeared in The Graphic, of December 25, 1869.