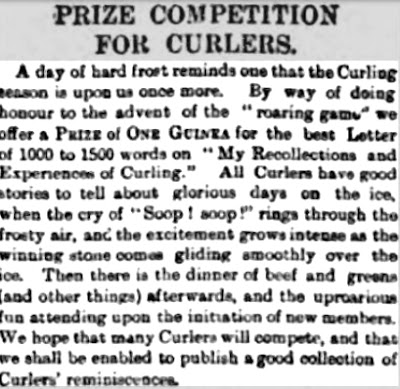 In the run up to Christmas Day, 1893, the Aberdeen Peoples's Journal offered a prize of one guinea for the best letter about curling! That's the invitation above, courtesy of the British Newspaper Archive, from the December 23 paper.

The winning entry was published on January 13, 1894. The writer was William Wilson, and he no doubt enjoyed his winnings, equivalent today of around £140.

You have to decide if these are real reminiscences. The Club would appear to be fictional, and the names made-up. Is the whole essay a fiction of William Wilson's imagination? Could even that name be a nom de plume?

Or is the letter an accurate description of a curling club's activities in late Victorian times?

Here is the winning letter:

"Our Club - that is the Strathard and Glendarroch - is not only the oldest, but the best Club in a very wide area. Nor is this a mere idle boast for we demonstrated the fact over and over again by beating all other Clubs within a radius of more than fifty miles. By 'The Club' of course, I mean the Curling Club. We have no other Club, but though we had they could not for a moment compare with or be spoken in the same breath as the Curling Club. For what game or pastime can bear comparison with Curling? Cricket? Football, Golf? Faugh! Boys can play these, but it takes men to play at curling.

I think therefore we are justified in our long-formed and established opinion that Curling is the game of games. There is no 'caste' about it. Like love and learning it levels all. On the ice the farmer or gamekeeper may skip the laird; and the ploughman or shepherd his employer. At all Club meetings every member has equal votes and equal rights. It is a social, democratic game; and brings us nearer the poet's ideal, "When man to man the world o'er, shall brothers be for a' that."

Donald MacGillowie is the oldest member of the Club, a fact we are often reminded, especially over a 'jorum' in the Strathard Hotel; when like all great generals, he fights his battles o'er again. Among a few defeats Donald can claim many great victories. One of his keenest fights, and one often alluded to, was his triumph over a crack rink of the famed Loch Lomond Club. I happened to be one of his henchmen on that memorable occasion, but as he was skip the glory of victory is entirely his. He made a shot which deserves special mention. Our opponents had a stone on the tee, a beautiful pot-lid, long guarded by one of ours, which, equidistant, was in turn guarded by one of theirs. I directed Donald to play up the guard, as there was no alternative; it was his last stone to play. I heard whispers of "Misdirection", "Moral impossibility", etc. Donald played dead - knocked up the double guard, off flew the pot lid and we laid shot. With brooms in the air, we cheered him to the echo. That shot made us victors; it was a great triumph and a great shot. Perhaps no general that led an army to victory felt prouder than did Donald that moment.

But though giving this passing and deserved tribute to our oldest member, it is as a Club versus all other Clubs that we rise and fall. We are in fact as well as in name brother curlers. On the ice we are united, keen, enthusiastic curlers. On the ice we all feel young. We are boys again, with all the abandon of boys, for during the curling fever everything else mundane has to be subservient to the game. This curling fever is infectious as influenza, and makes its appearance every season with the first hard frost. If the frost is keen, and holds for three consecutive days, the fever is on. Then, how strange to see old, staid men like Macnaughton, Emerard - an elder of the kirk and a most exemplary man during the rest of the year - shouting across the river to Farquharson, Dumore, "if he noticed what state the ice was in on the 'Pond'?" The 'Pond' is on Farquharson's farm. Of course he asked it in a careless, off-hand manner, as if the matter did not concern him in the least; but his wife told me after the 'kirk skaillin'* on Sunday that he looked at the glass the last thing at night, and by candlelight in the morning. The fact was the fever was coming on, and though the man would hardly own it, even to himself, he almost prayed that the frost would hold. And though Farquharson controls himself better, he is quite as keen a curler, and perhaps the stongest player in the club.

I recollect when we played the Camlarig Club he was in my rink. Their leader played heavy flat stones which he boasted could not be shifted. I knew Farquharson's capabilities, and resolved to show our opponent how we 'shifted' stones. So I shouted, "Chap-and-lie," and held my broom above the 'immovable'. With quiet deliberate resolution Farquharson caught his 45-pounder. For a moment its bottom faced the sky, and the next onward it came 'dirling' in its impetuosity, and shot the leader's stone up among the heaped snow, with chips flying all around as if from a stone-dresser's chisel. That settled the 'leader' but not the 'skip': he was on the losing side and he showed it, which made Tam Lamonth and Archie Collie shout themseves hoarse. The famed Mrs Partington could not have excelled these two that day - their sweeping was perfect.

But, as a rule, we avoid strong play, and incline more to the quiet, scientific style, which I will illustrate by relating a decisive defeat sustained by a leading rink of the Invertay Club at the hands of one of ours. We won as a club - our four rinks were up - but it was old Stewart's rink that so distinguished itself.

Old Stewart is a veteran curler himself, but on this day his work was a mere sinecure, as it was to George Carrick and Duncan Smith the chief honour was due. They played so steadily into each other's hand all day by drawing and guarding that the game stood 25 to 1 when time was called. It was brilliant play. But the skip's play at one head was equal to, if it did not excel, anything done that, or I might say any other, day. Quite a cairn of stones guarded the tee as he went to play, and the winning stone was on the tee and against him. To get at it seemed impossible. With his first stone he drew up nearly opposite the tee; with his second he took an inwick off the first, knocked away the winner, and counted shot. With such play it is no marvel, as already indicated, that we are almost invariably victorious.

I think the sweeping does it. To see George Carrick plying his cowe, or even to hear him shout "Soop, soop!" when at the tee or on the crampet, is a treat that should not be missed.

Being thus generally victors we are often challenged by other clubs. Nor are we loath to accept these challenges. Ice permitting, we play all comers. If the play happens to be on our ice we treat them with genuine hospitality. With strangers we don't play on the Pond, as there is such a choice of ice on the Loch, in the middle of which stands St Fillan's Isle, where when half-time is called we lunch amid the ruins of an old castle that sheltered the Bruce in his flight after the combat with Macdougall of Lorne.

Our Annual Dinner of beef and greens usually winds up the season, when the 'fever' may be said to have reached its culmination, if not spent itself from over-exuberance and demonstrativeness. Previous to dinner new members are initiated into the Club. The initiation ceremony is, of course, a secret I must not divulge. It is carried out in its full ritual by our Club. Usually MacGillowie is officiating high priest of the 'brothering' ceremony, very much assisted by the rank and file of the Club. I question much if many of the newly joined could reveal any secrets though they were willing, owing to the pandemonium-like noise that is kept up during the ordeal. Once 'brothered' they are entitled to all the rights and privileges of the Club, including the sitting to dinner and paying for the same. The 'annual' is quite an event in the district. It is held, of course, in the Strathard Hotel, and always served in Mr Robertson's high class style, and presided over by our worthy President - who, like our skips, is annually elected by the voice of the Club. We are favoured with the company of representatives from numerous other Clubs.

The Toast List is long and varied, from 'The Queen' downwards, and is received with such cheers as only curlers can give. When the Chairman exhausts his list, private members are allowed to propose toasts. Among them, and well to the front, will be always found MacGillowie, for Mac is an orator as well as a curler, and what orator but wishes occasionally to air his abilities? Behold him, then, in his favourite attitude, with arm raised aloft, his hand holding a glass full charged, and with eyes twinkling, in a lengthy speech proposing some important toast, with a fluency begot of long practice. We generally terminate the night by singing Auld Lang Syne.

But to enumerate, however briefly, all the inwicks and outwicks even of one season on the ice would fill more space than you, Mr Editor, could spare; the few incidents I have recorded may help bring a faint idea to those who have never engaged in it of the health and pleasure, the thorough and complete enjoyment, derived from taking part in the grand, bracing, national, Scottish game of Curling."

I hope that William Wilson did receive his prize, as at the bottom of the column containing the article is (Will Mr Wilson please send his full address?)!

* I think this means as the congregation was dispersing.