Medals with a message

When Sir Alexander Boswell, the laird of Auchinleck in Ayrshire, gave a medal to the curlers of Kyle he caused very precise instructions for how it was to be played for to be inscribed on it.

The following description of the medal appeared in the Ayrshire Express of 1 January 1870:
"On one side, on a shield, in the centre, is the figure of a sturdy Caledonian, partially robed, with a stout club in his right hand, surmounted with a knight’s helmet and crown, over which is written in old English letters, 'Old King Coil,' and, above all, is the motto, 'Non Timet Hostiles Jam Lapis Istemenas.' Underneath the figure, in a garter, are the words, 'Kyle for a Man,' surrounded with a wreath of thistles and oak leaves, &c."

On the other side are the following instructions:
"This medal may be challenged for by any curlers of Kyle, and shall be played for by single matches, each playing six stones, and allowed a person to direct the game. Twenty one the game, and the distance forty yards from brough to brough. The winner not to be obliged to play more than one match with the same person, nor five matches, in whole, in one year. The man who challenges must stake a crown, the holder of the medal nothing. A contest for the medal not to be construed into a parish play, and all the matches to be played on the 'Whirr Loch' in the parish of Auchinleck."

Several explanations are necessary. The medal must have been presented before 1822 because on 26 March of that year Sir Alexander Boswell was shot dead at Auchtertool in a duel by James Stuart of Dunearn. (He was tried and acquitted in the High Court of Justiciary on a charge of murder.) Sir Alexander was a keen, keen curler; a member of the Duddingston Curling Society, and a poet who wrote some notable curling poems.

The Latin is a quotation about a stone from the Roman poet Martial. It means: 'This stone does not fear hostile threats.'

Kyle is that part of Ayrshire that lies between the Rivers Irvine and Doon. The old rhyme characterises the different parts of the county by what they were best at producing.

Kyle for a man; Carrick for a coo; Cunningham for butter and cheese And Galloway for woo’.

'Brough' is an old Scots word for 'circle', and a crown was a coin worth five shillings, a large sum at the beginning of the nineteenth century.

The play for the medal was to be single-handed, each curler throwing six stones, with someone in the broughs to hold the brush. Six stones is a very great number when one considers that at that period in and around Auchinleck the rink in ordinary curling matches consisted of nine men each throwing a single stone.

I have in my collection from the same bit of Ayrshire another medal that contains instructions.

It is of silver and engraved round the rim are the words: OLD CUMNOCK CURLERS SOCIETY MEDAL 1831.

On one side appear the words:

Whoever plays for me Must of this Parish be Fortyfive Yards from tee to tee.

And on the other:

These two are the only medals I have so far come across that contain the rules of play. I would be delighted to hear of any others. 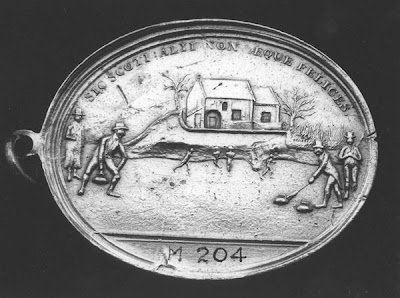