When World Junior Curling Came to Glasgow in 1991 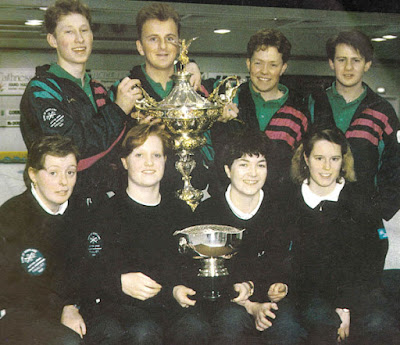 In 1991 these eight young curlers had just won the Scottish Junior Curling Championships and were getting ready to represent their country at the Worlds. They were (back, left-right) James Dryburgh, Fraser MacGregor, Alan MacDougall (skip), Colin Beckett, and (front) Anne Laird, Gillian Barr (skip), Claire Milne and Janice Watt.

I found myself thinking of them on Sunday as the World Curling Federation's VoIP Defender World Junior Curling Championships 2016 got underway at the Taarnby Curling Club in Denmark. Back in 1991, our Scottish representatives didn't have too far to travel. The event was held in Glasgow. It took place March 9-17, 1991, at the Summit Centre. Twenty-five years ago - how time flies! Sadly the Summit Centre is no more. The rink had a short life, opening in 1986 and closing in 1998.

You can find all the statistics from the 1991 World Juniors on the World Curling Federation's Historical Results pages, here. I wonder why the sponsor, the Royal Bank of Scotland, doesn't get a mention thereon? 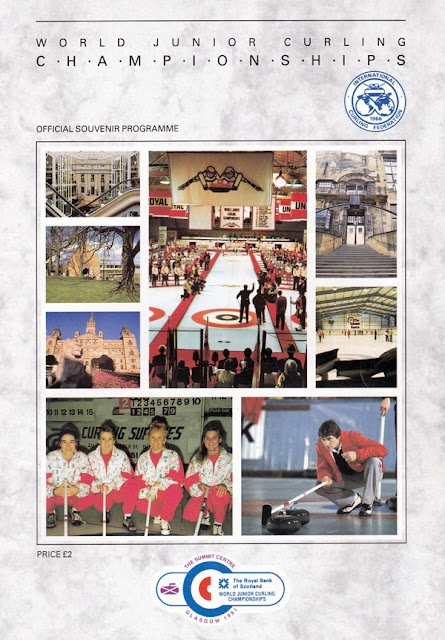 Rather than talk just about the event, I want to say a bit about the programme, above. As most collectors of international curling programmes know well, they often contain little more than the draw, the team names, and a number of 'welcome messages'. The 1991 programme contained much more than that. It included magazine-style articles, and hopefully was considered to be value for its £2 cover price. The forty pages plus covers were printed by Brown, Son and Ferguson Ltd.

The Executive Editor was Christine Stewart. She recruited me to help put the programme together. This was my first foray as the 'editor' of anything. I had no inclination back then that ten years later I would become the Editor of the Scottish Curler magazine.

Christine also involved Rod McLeod to design the programme, and he did a wonderful job. For me it was a great privilege to work with such a talented, fun and enthusiastic person. Rod McLeod was one of Scotland's foremost cartoonists, producing daily his 'take' on whatever was happening in the sporting world. This was football mostly, but he could also draw perceptive cartoons on the important news stories of the day. His cartoons, simply signed Rod, had a big following. He was a curler too, a member of the Nondes club. Rod died in 2004 and is still greatly missed. 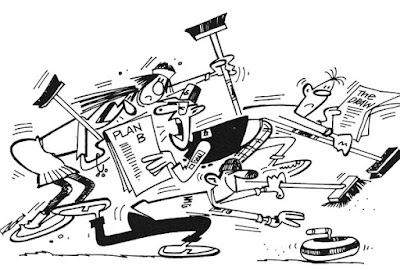 Rod drew this cartoon to illustrate page 5 of the programme, which had a 'who's who' of the local host committee. Leslie Ingram-Brown was the chairman, and his team included Ian Addison, Michelle Cunningham, Graham Davidson, George Gibb, Bruce Lindsay, Robin Shand, Bob Smith and Christine Stewart.

The event programme included six welcome messages. These were from George Younger, Chairman of the Royal Bank of Scotland, the main sponsor; Councillor David M Sanderson JP, Convenor of Strathclyde Region; Susan Baird OStJ JP, The Rt Hon The Lord Provost of Glasgow; RC Miquel CBE, Chairman of the Scottish Sports Council; Gunther Hummelt, the President of the International Curling Federation; and from Leslie Ingram-Brown, Chairman of the Host Committee. 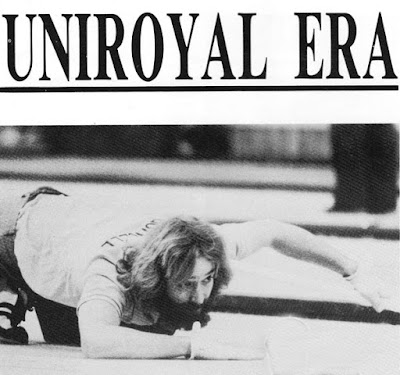 The programme included four pages on the history of the Uniroyal and Goodrich-sponsored championships. The year 1991 marked the end of that sponsorship. The first Uniroyal World Junior Mens Championship had been held in 1975, although the origins of the event went back much further, see here. The first official Goodrich World Junior Women's Championship had been held in 1988, growing from a European Junior Championship that dated from 1983. That 1988 competition in Chamonix was the only time that the junior women's event was staged separately. Both men's and women's events had been staged together since 1989 in Markham, and still are together today. Of course, no history of the Uniroyal would be complete without considerable mention of a certain Paul Gowsell, and his photo spanned pages 6 and 7 of the programme.

Elizabeth Paterson-Brown wrote about the International Curling Federation (as the WCF was called then) and junior curling, in an article titled 'The Way Forward'. Jane Sanderson wrote about 'Little Rockers and Mini-swingers'. 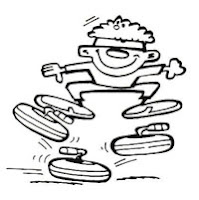 Doug Gillon penned three pages 'I Was There' recounting highlights of curling history. I wrote about 'Collecting'. Robin Welsh wrote about 'The Murray Trophy', the trophy still awarded to the winners of the Scottish Junior Men's Championship.

Then there was a 'Spotlight on the Umpires'. Roy Sinclair was chief umpire and his team included Alex Torrance, Isobel Torrance and Marjorie Kidd. 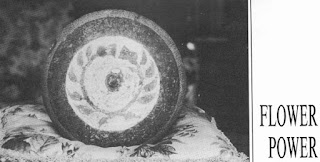 David B Smith's article on decorated curling stones had the title 'Flower Power'! 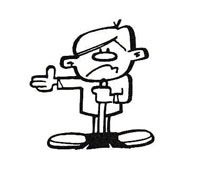 John Brown submitted some 28 quiz questions about the World Junior Championships and curling history in general. In the days before Google these were not easy. But John did provide the answers!

Page 40 of the programme had 'Acknowledgements and Thanks' and a space for autographs. I wonder if anyone collected the autographs of all the players? 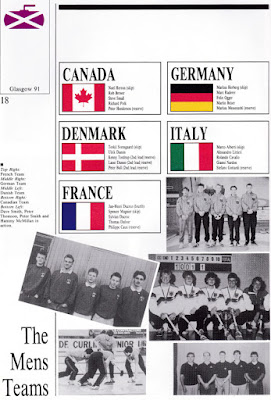 Here are the first group of the junior men's teams. 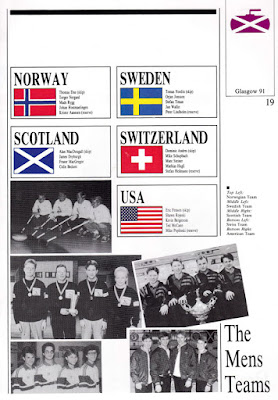 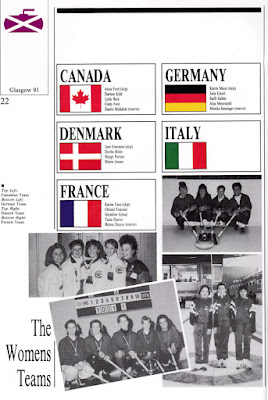 This page illustrates one of the problems facing the host committee back then. In the days before the internet and email, and before digital cameras, it was not easy for national organisations to transmit team photographs in time to be included in the programme. The space was there for the Italian women's team details, but the programme had to go to print before these were received. Fortunately, the WCF Historical Results database has this information, see below. 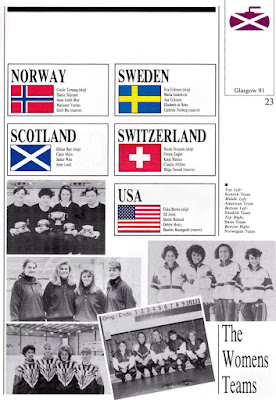 The draw occupied the centre double page spread. You can find the results of every junior men's game here, and the junior women's results here.

As far as I am aware there is no video footage or film of the event, but I would be pleased to be proved wrong! (Added later: Apparently video DOES exist. BBC television covered the finals. Perhaps I can post clips of this in a future article. Watch this space!)

I have kept the various reports of the event which appeared in the local newspapers, and these make interesting reading. I had forgotten that the teams were accommodated in the homes of local volunteers. Visiting fans complained about the over-use of air horns by the home supporters, some of whom were banned from beating drums as the chielf umpire was unable to hear his hogline umpires' calls on his walkie-talkie radio. And it is recorded that the Scottish Sports Council's anti-doping team were on hand for the first time at an international curling event.

Who won? Eva Eriksson's Swedish team defeated Nicole Strausak's Swiss side 5-4 in the women's final. Gillian Barr's team had lost to Strausak in the semifinal. On the men's side MacDougall's Scotland beat Noel Herron's Canadians 6-4 in the title match.

If anyone has photos of the winning teams with the trophies, I would be pleased to include these here. 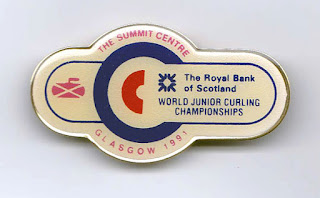 Off the ice, pin collectors had two event pins to add to their collection. This was the 'official' pin, an early example of a plastic coated badge which has disoloured somewhat with age. 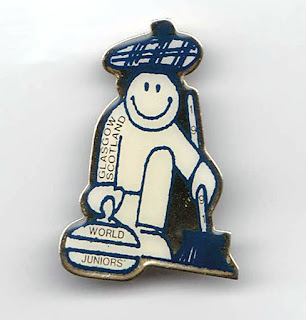 And we liked this one!

So, why don't I wrap up this nostalgic look back at the young curlers who competed in 1991 with a John Brown style quiz. Have a look at the list of competitors in 1991, below, taken from the WCF records, as well as the programme. Who went on to further international success in the years that followed? Can you spot the future World and Olympic Champions on the list? How many are still competing at top level?

Scotland's fifth player Graham McIntyre played in the last round robin game but does not appear in the records. So, are other names missing? Any other mistakes?

In the women's event I've listed the players' names as they were in 1991, and of course some have changed in the intervening years. The WCF database lists the players with their married names. Personally, I think that is wrong. In the records of an event, the players should be identified by their names at the time.

The top photo is from the front cover of the February 1991 Scottish Curler. Other images are from the programme.
Posted by Bob Cowan at 08:29 No comments: