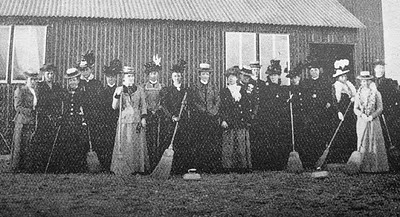 There are stray accounts of ladies indulging in the 'ancient, manly game' of curling from the second decade of the nineteenth century, but it was not until the century’s end that ladies so far threw away their femininity as to form themselves into curling clubs.

It is perhaps not surprising that the first of these were 'sister clubs', as it were, of well-established men’s clubs. Boghead Loch at Bathgate had been the scene of much curling throughout the century. It was an important centre for the curlers of West Lothian. Similarly, Hercules CC at Elie in Fife was a hotbed of the game, conveniently situated close to Kilconquhar Loch. And so, Hercules Ladies and Boghead Ladies Curling Clubs were the first to be admitted members of the Royal Club in 1895. Balyarrow Ladies (Fife) followed in 1898, and Cambo Ladies (also Fife) in 1899.

The first newspaper reports of the activities of any of these clubs which I have come upon are in The Glasgow Herald of February 6, 1899. Two Balyarrow rinks had taken to the ice on a private pond at Edenfield, beside Springfield in Fife; and Hercules Ladies took on Montrave at Montrave. The report was factual, and brief, and made nothing at all of the new phenomenon of ladies curling.

So quickly and well established did the ladies from Elie become that the opening on October 12, 1899, of a new club house for the Hercules ladies as well as the Hercules gentlemen was reported in the Annual for 1899-1900.

“The house is in two divisions, one for each club. The gentlemen’s house… is fitted up with tables, chairs, and an excellent stove, the gift of Captain Scott-Davidson, while the curling stones are ingeniously boxed in what serves as a seat all round the house. The ladies’ house…is provided with cloak-room and lavatory, and is handsomely furnished with cushioned seats and curtains, while the stones are placed under the seats as in the gentlemen’s house. Here also there is a large, handsome stove, the gift of General Morgan, Elie.

After the formal business of the opening of both houses the lady curlers and the gentlemen curlers took tea together. The curlers then arranged themselves outside the house so that photographs of the ladies and their part of the new house, and the same for the men and theirs, could be taken.

The fashion for ladies’ clubs looked as if it might catch on: in addition to those already mentioned Boarhills Ladies (Fife) was instituted and joined the Royal Club in 1902, but thereafter the movement appears to have fizzled out. By 1930 the only two ladies’ clubs to appear in the Annual were Hercules Ladies’ and Edinburgh Ladies, formed in 1912 but not joining the Royal Club until 1924.

The illustration is of Hercules Ladies outside their new curling house. The photograph originally appeared in the RCCC Annual for 1899-1900.
Posted by Bob Cowan at 19:29 1 comment: