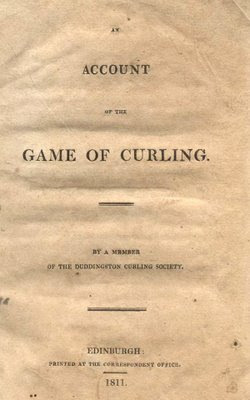 One of the little-sung heroes of Scottish curling history is the Rev. John Ramsay. Like many a man of the cloth he was a keen curler. He joined the famous Duddingston Curling Society in 1808 at the age of 30, but it was publication – anonymously – of An Account of the Game of Curling by a Member of the Duddingston Curling Society that entitles him to a place in the pantheon of Scottish curling.

An Account was, of course, the first printed account of the history and present practice of the game. In it Ramsay proposed for the first time in print the idea that curling had come to Scotland from the Low Countries, but he also firmly placed it in the culture of Scotland of his day.

Ramsay was born in Carstairs in Lanarkshire and went to the University of Edinburgh where he studied Arts and Divinity. Before he got a charge of his own he made ends meet by being a private tutor, co-founder with Sir David Brewster, a fellow student, of The Edinburgh Encyclopedia, editor of and contributor to The Scots Magazine, and after 1805 successively assistant minister to the Rev. George Husband Baird, Principal of the University and minister of the High Kirk, assistant to Sir Henry Welwood Moncreiff of St Cuthbert’s and assistant to Dr Moodie of the Tron Kirk. Principal Baird a member of the Duddingston Society. In 1812 he was called as assistant to the parish kirk of Ormiston, East Lothian, where he speedily succeeded to the ministership on the death of the incumbent. After twenty one years he was called to Gladsmuir and spent the rest of his life in the ministry of that East Lothian parish.

While Ramsay was a member of Duddingston he not only was elected one of the committee to devise the Gold Medal but also wrote his Account and participated in all the usual curling activities. The Duddingston Bet Book shows him joining in challenges by members from Lanarkshire against members from Dumfries and Galloway but joining other clerics to play the lawyers.

When he got to Gladsmuir he was in at the foundation of the curling club there and from 1836 until 1841 was the new club’s president. One of his first acts was to propose that the club “should procure a silver Medal to be worn for the Season by the winner.” He remained a member until, it appears, he resigned the presidency and membership in 1841. What caused the separation of the club and the minister is not known, but for the last thirty years of his life the minute book is silent about him; and even his death went unnoticed.

His parishioners, however, did erect after his death in 1871 a plain, dignified stone above his grave in the kirkyard at Gladsmuir.

During the just-finished tour of Scotland by the Canadian curlers, David Affleck, secretary of the East Lothian Province of the RCCC, and the president, Callum Harvey, arranged for a deputation of two of the Canadians, Barry Greenberg and Bruce Beveridge, to join them to lay a wreath in memory of this important man. The wreath was made, appropriately, of evergreen branches of Scots pine and conifer of Canadian origin.

When the Rev. John Kerr wrote of Ramsay in a piece that is printed in The Channel Stane he said, “If any ‘brither curler’ has a day to spare when the summer sun dispels all thoughts of John Frost and the channel-stane, he will find it refreshing to visit the beautiful spot where our historian is laid, and to read the simple inscription on the marble slab above his grave.”

What a good idea!

by David B Smith. 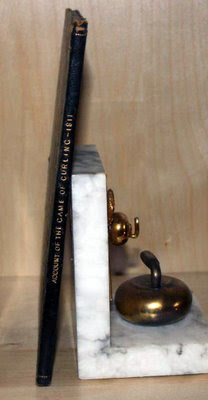 The small volume that is the Account of the Game of Curling by Rev John Ramsay. 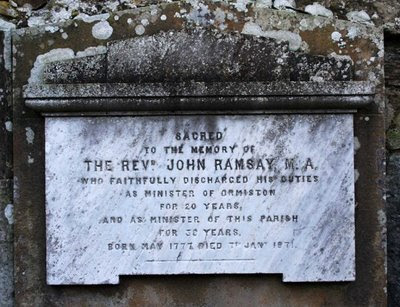 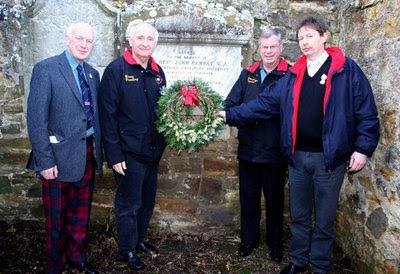 A wreath made up of conifer foliage such as the Douglas Fir and Thuya, both native plants in the Canadian west coast, and Scots pine foliage, all collected from Smeaton Lake, a traditional outdoor curling site, was placed at the foot of the Graveyard memorial. L-R: David Affleck, Barry Greenberg, Bruce Beveridge, Callum Harvey.