When the Clubs Rallied at Stirling 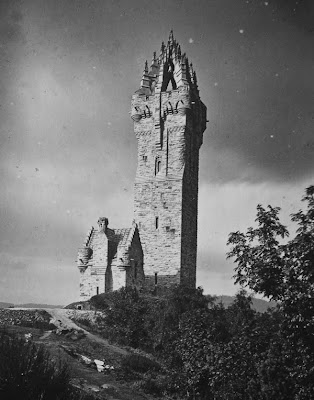 David B Smith writes the following, with the one hundred and fiftieth anniversary of the occasion approaching, see here:

On June 24, 1861, crowds began to assemble early in the ancient burgh of Stirling. After years of talk and six years of fund-raising, the second step was about to be taken to make a permanent memorial to Scotland’s great patriotic hero, Sir William Wallace, knight, of Elderslie.

The first step had taken place on the same date six years before: a large concourse of patriotic Scots at a vast meeting in the King’s Park in Stirling had resolved to appoint a committee charged with the task of raising a suitable monument to Wallace and finding the money to do so.

The design chosen was the one we see today – the large Scots baronial tower with the gothic crown on top set upon the Abbey Craig, and the designer was the Glasgow architect, J T Rochead. Contributions poured in from Scots all over the world.

June 24, 1861, was the day on which the foundation stone was to be laid. That was the anniverary of the Battle of Bannockburn, in 1314.

The Rev. Charles Rogers, the committee’s secretary, invited all the right people, the provosts and town councils of the important towns and cities of Scotland, a large number of Masonic lodges, many companies of Volunteers, and seventeen curling clubs representing Scotland at play.

That it was curling clubs that were chosen is important for that shows clearly what an important place in Scottish society was held by the game. Said The Glasgow Herald, "At an early hour the town became crowded with visitors from all parts of the country; and, latterly, there could not have been fewer than 60,000 or 80,000 strangers in the place." There were "various decorations adorning the principal streets and flags flying in gay luxuriance from the most prominent points in the town."

A little after one o’clock the procession of 8,000 to 10,000 persons began to leave the King’s Park, led by two horsemen in ancient armour, followed by Lieutenant General Sir James Maxwell Wallace, a descendant of the hero, and an instrumental band. There followed seventeen companies of Volunteers from all over Scotland, many with pipers.

Bringing up the rear were bearers of Wallace’s and equally ancient swords, and the organising committee.

The walk to the top of Abbey Craig took well over an hour and the ceremony involved important speeches before everyone dispersed.

The curling clubs involved, according to the Programme of Proceedings, were Cardross, Polmont and West Quarter, Shotts, Balmerino, Cambuslang, Meigle, Abercairney, Crossgates, Hopetoun, Partick, Strathendrick, Port of Menteith, Johnstone, Merchiston, Dollar and Devonvale, Drummond Castle and Lochgelly. Of the participant and surviving clubs only three have been able to provide to me evidence of the event from their minutes. I thought that patriotic curlers of the present day might like to share what was written.

Since it was what the Secretary of Polmont wrote that prompted this article I’ll quote him first.

June 24, 1861. “Seldom does it occur that curlers are called out at this flowery season of the year to enjoy themselves they being more appropriately turned out when the icicles are depending from the Boughs and all around in 'hoary cranreuch drest' but as this was an exceptional day and the object one in which every lover of liberty and of his country was called upon to do homage to departed valour our club turned out 16 of its number and had a very pleasant trip to Stirling to witness the inauguration of the Wallace Monument on the Abbey Craig.”

The Merchiston secretary recorded merely that on 31 May 31, 1861, “[he] laid before the Meeting A letter which he had received from the Committee of the National Wallace Monument requesting the Presence of the Merchiston Curling Club at the laying of the foundation stone of the Monument.” And that it was decided to send a deputation of two members “at the expense of the Club…”

Perhaps the Partick secretary entered into the spirit of the occasion best.
“In the King’s Park of Stirling on the 24th of June, 1861, about thirty members of the Club gathered and formed part of the procession of all denominations of their countrymen to march to the Abbey Craig, there to honour by their presence the name of their departed Patriot, The Noble Sir William Wallace, ‘The Hero of Auld Scotland,’ whose name was to the English as the Breath of the deadly ‘Simoon’ [a violent hot sand-laden wind] is to the Arab, or the Ravenous Wolf to the Russian or Lapland travellers, by lending a helping hand in the laying of a foundation stone of a monument to be erected on the Abbey Craig to his memory as a token of the high estimation in which his countrymen hold his departed worth, and as a remembrancer in all time coming of him who so nobly has gone before, being a tribute of respect so dearly won by him, who suffered death rather than submit to the ‘Power Seeking’ English, or prove a Knave to his country. The curlers were rallied round their handsome Silken Banner, presented to the Club by Mr. John Dunn and crowned by an imitation Curling stone presented by Mr. John White. The Partick Curling Club formed no mean part of the lengthy procession. The whole proceedings passed off with complete success, and the curlers wended their way home , no doubt much pleased and much edified by their journey north.”

(This article was first published in the October 2005 issue of the Scottish Curler magazine.)

Top: The early photograph by the famous Dundee firm of James Valentine must have been taken very shortly after the National Wallace Monument was completed in 1869.
Posted by Bob Cowan at 14:22 No comments: