The day the house got smaller

(or 'Sheet Seven at Crossmyloof')

The World Curling Federation has clear instruction on the size of the house, the circles, on a sheet of curling ice. Of course, the colourful circles are not really necessary. What is relevant to the game is the edge of the outer circle, as this defines the 'counting area'. According to the WCF's 2014 rules booklet (which can be downloaded here), the outer edge of the outer circle must have a radius of 1.829 metres (6 feet). This wasn't always the case. The 'counting area' used to be much larger!

For some 80 years, from the middle of the nineteenth century, the rules of the game, as published by the Royal Caledonian Curling Club, stipulated that stones should not count if they were clearly outside the seven-foot circle. The house had a diameter of fourteen feet. 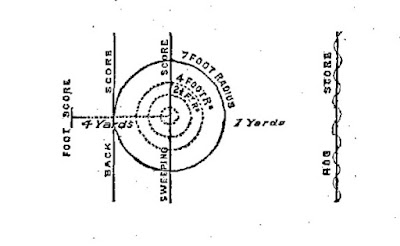 The rules section of each Annual of the Royal Caledonian Curling Club contained a diagram to assist with the laying out of the curling rink. The legend noted, "Around each tee draw a circle having a radius of 7 feet. [Inner circles may also be drawn.]" And the accompanying rule was "A rink shall score one shot for every stone which is nearer the tee than any stone of the opposing rink. Every stone which is not clearly outside the seven-foot circle shall be eligible to count."

All was to change on July 27, 1938, when the representative members of the Royal Caledonian Curling Club gathered in the North British Station Hotel in Edinburgh for the Club's Annual Meeting. Thomas A Gentles, the Club's President, was Chairman, and had to apologise for the small size of the room, the meeting being so well attended. Probably most of the delegates would have been looking forward to the evening where they would attend a dinner to celebrate a significant milestone in the Club's history. The Royal Caledonian Curling Club was one hundred years old!

But first the business of the day had to be covered.

Towards the end of the meeting, William Henderson of Kinnochtry Lawton got up to propose a motion. He had recently returned from North America as Captain of the 1937-38 Tour. He said, "Mr. President, lady and brother curlers, as the result of our experience in Canada and the United States I have put down this motion, with the unanimous approval, I think, of the Council, and, I think, also of the team, but if any of them think otherwise they can say so. In all the rinks in Canada and in the United States the rings are twelve feet, and I think I am correct in saying that we had gone a considerable distance on our journey before some of us realised that we were playing to twelve feet instead of fourteen feet."

The motion which Henderson was now proposing was, "The Tees shall be 38 yards apart, and with the Tees as centres, circles having a radius of not less than six feet and not more than seven feet shall be drawn. Additional inner circles may also be drawn."

The motion was seconded by John Wanliss of the Cowden Club.

Henderson explained, "My main reason for putting forward the motion is that there is not a single rink in Canada that is larger than twelve feet. That is their only transgression of the Rules of the mother club, and I do feel, and our brother curlers there feel, that they would like to be put in order and that the rule might be as I have suggested, namely, that the ring may be not less than twelve feet and not more than fourteen, and anyone can choose as they like between these limits."

The Royal Club President spoke in favour of the motion, "I may say, gentlemen, that this proposal of Mr Henderson's was discussed in a full meeting of Council, and we took the view that while we do not desire to encourage the abolition of the seven-feet radius, or its restriction in anyway, we support Mr Henderson's proposal, with a desire that we should legalise what is the practice in Canada."

It is interesting, is it not, that what is implied here is that the North Americans were breaking the rules of the game by having twelve foot circles. The Royal Caledonian Curling Club in 1938 was the 'mother club' and still thought of itself as the world authority on the sport.

At the end of the day, the motion was passed, but not before there had been considerable discussion. 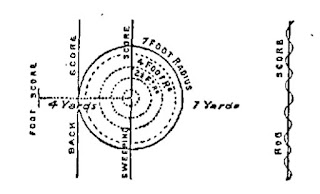 This was the diagram which appeared in the Annual following the 1938 meeting. The legend had the compromise statement, "Around each tee draw a circle having a radius of not less than 6 feet nor more than 7 feet. [Inner circles may also be drawn.]" The applicable rule was now, "A rink shall score one shot for every stone which is nearer the tee than any stone of the opposing rink. Every stone which is not clearly outside the outer circle shall be eligible to count."

Henderson had not based his arguments in favour of his motion simply on persuading the representative members that the Royal Club should fall into line with what was the norm on the other side of the Atlantic. By 1938 much curling in Scotland had moved indoors. The main arenas in which the sport was played in the 1937-38 season were the Edinburgh Ice Rink in Haymarket, the Central Scotland Ice Rink in Perth, and the Scottish Ice Rink at Crossmyloof, each of which offered six sheets of ice for curling. The Dundee, Kirkcaldy, and Falkirk rinks were to open in late 1938, and Ayr, Aberdeen and Dunfermline the following year. Although used for curling, it was the demand for watching ice hockey, as well as for skating, that was the stimulus for these arenas to be constructed. 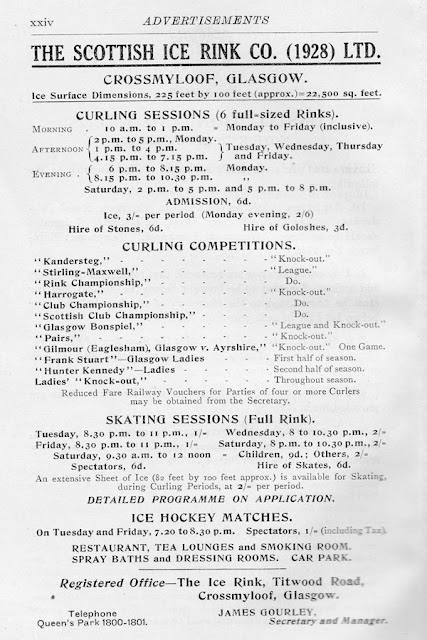 Here is the advert that the Scottish Ice Rink Company ran in the Royal Club Annual for 1937-38. The Crossmyloof arena then had only one sheet of ice which could accommodate six sheets of ice (with 14 foot diameter houses), and which was also used for skating and ice hockey.

It should be pointed out that many different curling clubs rented ice at the facility at different times and on different days, as well as competing in the many open competitions advertised.

It was the demand for curling ice that prompted the Scottish Ice Rink to build a £20,000 extension, a separate single story rink adjacent to the main arena, and this was completed in 1938. 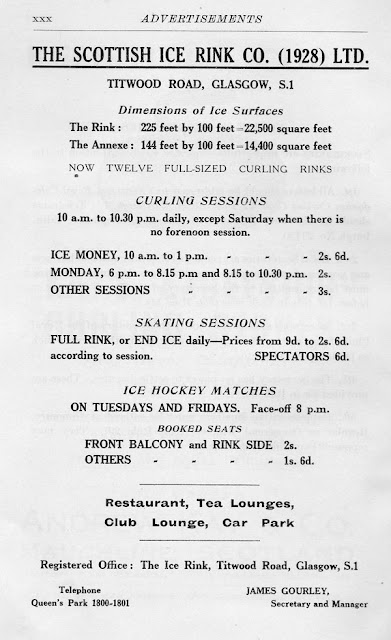 The opening of the annexe provided a further six rinks, in addition to the six that could be accommodated in the main arena. Note that, in the main rink, there was an 'end ice' area reserved for skating, even when curling was going on. This advert is from the 1938-39 Annual.

At the 1938 AGM, Henderson had argued, "One main reason for the lesser ring than the one we are accustomed to, the fourteen-feet ring, is the fact that you get more rinks in the building. In Canada and the States, as you know, all the curling takes place under a roof, and it is coming to be that way in Scotland too. One can see the number of rinks that are going up all over the country, and I think it would lead to cheaper games. I think instead of three shillings probably two shillings and sixpence will be the result; at least, I hope for that, although I get no guarantee. If you get seven rinks into very slightly more than is at present required for six rinks, it is obvious that there would be a very considerable increase in the earning capacity of the area. You then get in 56 curlers instead of 48; and you must not forget when curlers go to these rinks it generally is not what they pay for the rink but what they do for the general good of the house."

The thought that the cost of their sport might be reduced if ice rinks had more sheets available for them to play on may well have been persuasive for the representative members to vote in favour of the resolution! I am sure that the ice rink owners would have welcomed a change of rules that allowed more curlers to play on the same sheet of ice than before, although this did not happen immediately. A World War intervened. 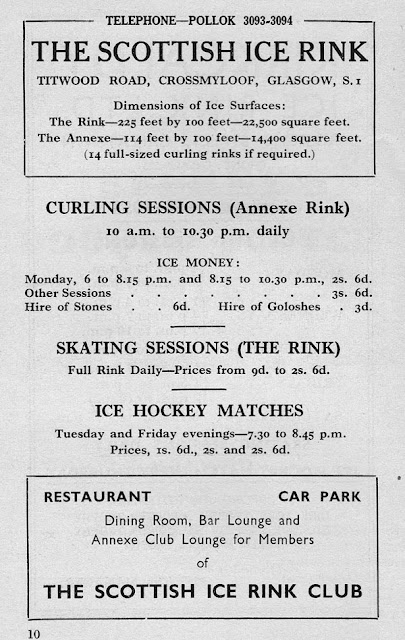 It took a while after the war for curling demand to return to pre-war levels. However, by 1950, the Scottish Ice Rink could accommodate 14 rinks, seven in each of the main rink and the annexe, as seen in the advert above, from the 1950-51 Annual. This of course could only be accomplished with houses of twelve feet in diameter, rather than fourteen. This is how I remember Crossmyloof when I began my curling career in the early 1960s. On some evenings, seven sheets were in action in the main rink, and seven in the annexe, although the latter was called simply the 'curling rink', as a new four-sheet ice pad was soon to be constructed, which would be known as 'the annexe'. For more on Crossmyloof, see here. 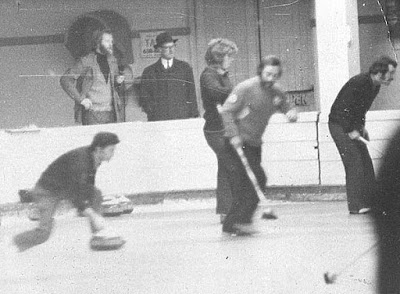 My subconscious mind has always wondered why the curling rink I started to play on had seven lanes of ice. Why not six, or eight? Seven is a rather odd number, in more ways than one! But we know now that it was the change in the rules of the game in 1938 that allowed for more lanes to be included in the building which had once held just six!

Sheets six and seven on the curling rink at Crossmyloof are shown in this old photograph. The Carmunnock and Rutherglen CC is at play in the early 1970s. Nearest to the camera, on sheet 6, Norman Crosthwaite is delivering the stone with Russell Chambers ready to sweep. Behind, on sheet 7, a young Ken Horton is skipping against his brother David. Their father ('Mr Horton') watches behind the rink, alongside Johnny Hibberd.

Circles fourteen feet in diameter were still in use on outside ice into the 1960s. It was not until the Royal Club's Annual Meeting in the summer of 1963 that the rule was finally rationalised. Robin Welsh, the Club's Secretary, brought the matter to the attention of the meeting: "Rule 44: That this rule be altered to read as follows, 'The tees shall be 38 yards apart - and, with the tees as centres, circles having a radius of 6 feet shall be drawn'."

Willie Wilson (St Boswells) explained, "During the year the Competitions Committee, of which I am Convener, held a meeting and the chief purpose of that meeting was to discuss this rule which was brought up by the Swedish Curling Union and we decided this. It was approved by Council and it was sent to all the Overseas Associations and was approved by a large majority."

And curling circles have been 12 feet in diameter even since, indoors AND on outside ice!

The Crossmyloof photo is from the author's archive. The adverts are scanned from Royal Club Annuals in the author's library.
Posted by Bob Cowan at 10:10 No comments: