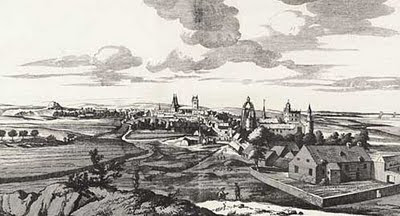 The forthcoming European Curling Championships at Aberdeen are my excuse for passing on some facts about the early history of the game in Aberdeen and the north east of Scotland.

The first interesting fact is that there is no early history of the game there. Although golf is well documented from the end of the sixteenth century we have to wait until the middle of the nineteenth for the first reference to a game of curling played in the city. In fact, when The Aberdeen Magazine of March 1831 reviewed Sir Richard Broun’s Memorabilia Curliana Mabenensia it is clear that the game was unknown.

“Curling is a game, of which, even in name, many of our readers are ignorant. The enthusiasm with which it is followed in the south of Scotland passes belief. It is not many years since the Magistrates of Edinburgh were wont to proceed to Duddingston, in all their official robes and insignia, with Town-drummers before and Town-serjeants behind, attended by the Highland bodies of the Town Guard, with Lochaber-axes, to witness the games. Some parts of the Inverury canal would do as well for a rink …

If they [the readers] have never seen a curling stone, we may tell them it is, for all the world, just like the Mechanics’ Institution in King Street, supposing it a little rounded off at the base and flattened at the top, and with the chimney bent at right-angles for a handle. Those used at Dumfries are like a sugar-loaf or a glass-house; some are of the shape of Dutch cheeses; and others of a sort of cheese, of which we do not know the name, oblong and higher than they are broad.

If it should ever be the intention of the gentlemen of Aberdeen to attempt this manly exercise, we recommend the book before us as containing all that need be known on the subject; it is full of animation, and being, as we believe, the work of one of the first curlers in Scotland, if nothing more, it must afford an interesting picture of a game practised in a remote district of the country, and quite unknown in England or Aberdeen.”

The Aberdeen Journal of 28 January 1878 prefaced a report of some district medal matches at Aboyne with these words: “Within the last few years this excellent winter game, which at one time was only heard of in the south, has become a very popular game in the north of Scotland, and almost every year a new club is being added to the list of those already in connection with the Royal Caledonian Curling Club, which has for its patron His Royal Highness the Prince of Wales, its president the Earl of Breadalbane, and its vice-president the Earl of Glasgow. The Royal Caledonian Curling Club was established in the year 1838, the name of the founder being unknown. Since then there have been no fewer than 495 local clubs initiated into the Royal Caledonian Curling Club (three of which only are in the county of Aberdeen), and it still goes on increasing. The game is generally known as 'roaring game', a name derived from the amount of 'roaring' necessary on the part of the skips in giving directions to the players. It is the national game of Scotland, and one better adapted to the country could not have been devised. It is an excellent game in every respect. It is the best combination of sport, health-giving exercise, pleasurable excitement, and scientific play that has yet engaged the attention of the robust inhabitants of North Britain. Its popularity is then well-deserved.”

The writer quite clearly betrays his unfamiliarity with the game in attributing the 'roaring' of fits popular name to the shouts of the skips: we southerners know that it echoes the rumbling noise of a curling stone as it runs over water-borne ice.

The article then goes on to describe the matches played at Aboyne for four Royal Caledonian Curling Club district medals among the curling clubs of Fettercairn, instituted in 1852, Braemar in 1854, Aboyne in 1867, and Aberdeen in 1874. "All the games were well contested, and yielded a great amount of enjoyment and pleasurable excitement."

It may be of interest to see how the curlers travelled to their goal, Aboyne.

“The Braemar men arrived by first train for Aberdeen at eight o’clock. The Fettercairn were next to arrive, about nine o’clock, in an open brake, in which they had driven about 4 ½ hours from home; and the Aberdeen players arrived by the 9.30 train. All then proceeded to the ice, about half-a-mile from the station, with brooms in hand, each to put forth his skill in attempting to gain the medals.”

The writer of this piece was in error in so far as he seemed to suggest that curling was unknown in Aberdeen until the founding of the club in 1874, for The Aberdeen Journal of 10 January 1849 reported: “The frost which has prevailed during the week, more or less intense, has been taken advantage of by those of our citizens who can enjoy the healthful and exhilarating amusements of the ice. On a small sheet of water in the Old-town Links, the Curling Club have met on several days, - and some excellent and keenly contested ‘bonspiels’ have been played; while around them, bands of skaters, of all sizes, kept skimming along in every direction, with amazing dexterity and beauty of locomotion, and vieing with the wind in speed - the whole presenting a pleasing and animating scene. On Friday, a number of the Curlers, after a keen afternoon’s sport wound up, in characteristic manner, by partaking of ‘curlers’ fare’, in St Nicholas Hotel – among the first occasions of the kind on record in the annals of ‘our northern city cold’. This fine national game, hitherto little known here, is at present quite the rage in the south; it is enjoyed by all classes, and friendly contests of opposition Clubs are going on with great spirit.”

The Old-town Links, or King’s Links, lie between Old Aberdeen and the sea, and have provided ground for golf for the citizens of Aberdeen for more than five centuries.

The illustration at the top of the page is a late seventeenth century view of Old Aberdeen, looking north. A small portion of the Old-town Links can be seen on the right edge of the woodcut. It is from Slezer's Theatrum Scotiae.

I am indebted to John Burnett for assistance in the preparation of this article. DBS
Posted by Bob Cowan at 19:27 No comments: